Book Review: Into the Grey by Celine Kiernan 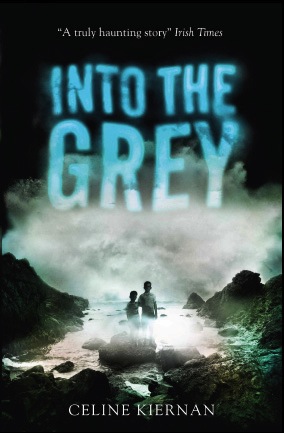 Title: Into the Grey

I think the fire changed us – me and Dom. I think that’s how the goblin-boy was able to see us. Though he’d been there for every summer of our childhood, we’d only been stupid boys until then. Stupid, happy, ignorant boys. And what in hell would he have had in common with two stupid boys? But after the fire we were different. We were maybe a little bit like him. And so he saw us, at last, and he thought he’d found a home…

Why did I read this book: I have LOVED Celine Kiernan’s Moorehawke Trilogy (one of the best I have ever read) and have been waiting for an opportunity to read this award-winning book since it came out in Ireland a few years ago.

It was the fire that changed twin brothers Pat and Dom. It’s as though losing everything they owned opened a door into the Grey and allowed the boy, to see them. It is Pat who first realises something terrible is happening. One day he wakes up in the middle of the night and sees Dom talking to the goblin-boy with the dark smile sitting at the end of Dom’s bed. It is Pat who hears the boy talk about Lorry and about the bad man. It is Pat who remembers those late-night encounters whilst Dom forgets about them. And it is Pat who – whilst terrified, isolated – will have to save his beloved brother’s life before he is lost to the Grey forever.

Into the Grey is the best type of ghost story. The type that is chilling, terrifying and which grows incredibly poignant as the story progresses. The less said about the actual plot the better as typically, Into the Grey has a mystery at its core, one that takes Pat most of the book to sort out. But the threads that are woven around this mystery core are what make this book such a pleasure to read – those threads are intrinsically built into the narrative in a way that make them inextricable from it. So whilst there is a ghost and there an actual haunting present in the story, it would be impossible to talk about those without mentioning family and brotherhood, for example. The fact that Pat and Dom are twins plays a huge role in the story both in terms of the actual mystery but in terms of their developed bond that gives Into the Grey one of its biggest emotional pulls. Another one is Pat and Dom’s family, their beautifully written family dynamics with their high and lows. One of the biggest frustrations I often have with any mystery is how everything could be easily sorted if only people had direct conversations with each other. In here, I understood the reasoning behind Pat needing to do things by himself – from his fear at losing his brother to his preoccupation to not crush his already overwhelmed parents.

Another theme of the novel is of course that of loss. Pat and Dom’s family have lost all of their material possessions in the fire that destroyed their house. If this wasn’t already enough, add to this the economical strain levelled on them as the family is obviously not rich unlike their wealthier relatives. It is all the more interesting because even though there is obviously love and connection there, things are not simple. Complex family dynamics that deal with multifaceted stories, diverse backgrounds, and relationships that are not black-and-white love/hate ones are like catnip to me. Still on the topic of “loss”, there is also the fact that their Nan is losing her memories to dementia; there is the loss of history there which is then connected to another big loss but this goes back to the central mystery and how it unfolds.

That material loss also informs different hurts: Pat is definitely changed after the fire, it’s like he has matured overnight. The bond that exists between his mother and his ailing grandmother (who suffers from dementia and who has caused the fire, by accident) is an extremely fragile thing. There is an extremely moving moment in the story where Pat observes his mother through different lenses:

I watched my ma hunch over her hands. She was breathing, deeply, trying to quell her sudden rush of anger. She was gathering it into herself, shoving it down somewhere unseen. I imagined it simmering away inside her , never quite extinguished, never quite expose, and I had one of those bright, rare moments of awareness when you see someone familiar in a new and startling light.

(…) I thought about how gentle Ma was with Nan; and how shocking her statement in the kitchen had been (I think I hate her, Dave). Because Ma had never, ever – not once – spoken impatiently or in haste to Cheryl in all the time she’d been in our care.

I had accepted all this. I had taken it all for granted. Because I had assumed that this was what women did; that it came naturally. Now, sitting at the breakfast table, looking at my mother and realising how much she had given up, I felt sick suddenly at how under my radar she was most days.

Finally, I can’t finish this without mentioning the fact that this is a historical novel too. There is a dual historical narrative: Ireland in the 70s and Ireland in the early 1910s. The connection between both is gripping. Not to mention a thoughtful look at the Irish-British hostility during World War I that seeps into the narrative (especially what it meant for Irish boys who joined the British Army to fight the War.MY HEART).

Into the Grey is a terrific novel. It’s a beautiful written and executed ghost story that speaks to the deep connections between people (families, twins, brothers-in-arms, and a bonus male-female friendship). With heart-wrenching moments and an incredibly satisfying ending, this is a highlight of my reading year.

I ran to the bedroom with the intention of getting my jumper and runners, and paused at the window, looking down into the garden. I wasn’t at all surprised to see Dom down there, strolling along in his pyjamas, but the sight of his companion made my knees unhinge.

The little white goblin boy was prancing along beside my brother, his delighted grin a black half-moon in his chalky face. He was chatting away, obviously in the middle of a very animated and amusing conversation. Dom was smiling his lopsided smile and sauntering along, idly swinging a stick at the untidy bushes against the wall. He seemed perfectly comfortable in the company of this naked little creature. The boy said something and Dom laughed, glancing at it with the same affectionate amusement he usually reserved for me.

I flung myself at the window, fumbled the latch and shoved up the sash. Dom’s voice floated up to me on the cold air. ‘… really?’ he said. His stick swung, thwack thwack, against the bushes.

‘Oh, yes,’ said the creature. ‘Look. Put your arms out like this. Then put your head back…’

I stuck my head over the windowsill. The little creature flung his arms wide and put his head back. If he’d’ve looked a little to his left he’d have seen me peering down at him, but he only had eyes for my brother. And he was looking at Dom with a kind of tragic joy, a kind of heart-broken devotion that would have been moving had it not been on the face of such an awful creature.

Additional Thoughts: Celine Kiernan is guest blogging with us today talking about songs and the music that inspired the novel. We also have a giveaway. Go HERE to enter.