Genre: Officially, Dark Fantasy but it has a LOT of romance. 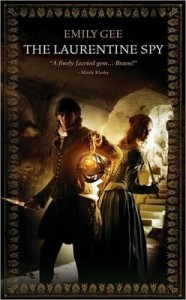 Summary: The Corhonase citadel is a place of virtue and debauchery. But nothing is as it seems, whether in the ballrooms and salons of the nobles’ Court or the catacombs beneath the citadel. Saliel has many secrets; her spying is one, but her most guarded mystery is her magic. She walks a narrow path between discovery as a spy and being burned as a witch. With a sadistic Spycatcher closing in, Saliel and her fellow spies are tested to the limits of their endurance—they must trust each other, or die. Magic may be their only hope of survival…

Why did I read the book: I saw this review at Fantasy Book Critic and immediately felt I had to read the book . Thanks to the awesome Graeme , I was able to get a review copy from the publisher, Solaris.

Warning: the review contains some minor spoilers which I feel need to be mentioned but in my opinion these spoilers do not ruin the experience of reading the book.

A cloaked, hooded women walks through the catacombs beneath the citadel of Corhonase. She is not afraid but she is careful. She carries a knife for protection. She reaches an alcove and another hooded figure shows up and she says:

“I saw three rings around the moon tonight”

and she is cleared. The guardian takes her into the chamber where One and Two were already seated. The woman – Three – greets One and Two and they all proceed to talk about what brought them here. They are spies from the Laurentine Protectorate, enemies of the The Corhonese Empire, infiltrated in their society to gather information. One, Two and Three know nothing about one another, for their own protection in case they are caught. But it’s clear that One and Three have a special relationship and feel extremely protective about each other. Each of the spies leaves the chamber via a different route and as they ditch cloak and hood, they join the Corhonase Court and assume their aliases.

One, whose real Laurentine name is Saliel, assumes the alias of Lady Petra, a young lady who is the sole survivor of a tragedy and is in mourning. Three, or Athan, becomes the indolent, slow-witted Lord Ivo.

The story follows the adventures of One and Three as they gather precious information for their country, which is under the threat of an imminent attack, and run against time. And as the clock ticks , the pressure increases as the Prince’s Consort decides that Lady Petra should get married to….Lord Ivo. Saliel, without knowing that Lord Ivo is One, abhors the idea of getting married to that man but she has no choice. Lord Ivo on the other hand, abhors the idea of marrying a Corhonese even though Lady Petra’s disgust for him only makes him ….want her. There is also a catch here: Corhonese women are supposed to be docile and honour their husbands above all and simply endure the quick encounters in the marriage bed as their husbands are not supposed to make it good for them – they all have the courtesans for their pleasures.

Saliel and Athan hope to avoid the wedding by finishing their mission and leaving the citadel but things don’t go as smoothly as they hoped. To complicate matters even further, it becomes clear to the Corhonese that there are spies in their court and they bring the infamous, terrible Spycatcher to investigate and interrogate everybody.

I knew it. I saw this book in the Fantasy Book Critic blog and I.just.knew. I was going to love it. I wasn’t wrong but it wasn’t what I expected from the blurb and the genre’s definition. There is hardly any “Dark” in this Fantasy novel and a lot of “Romance” which I guess would make most of our romantically-inclined readers very happy indeed specially for its most satisfying ending. I know I was! I read it in 5 hours non-stop because I simply could not put it down.

The first 250 pages of The Laurentine Spy are filled with tension and both the spying and the suspense of will they –won’t they (be caught. Get married. Find out who they are BEFORE they get to that freaking bed.) were nearly heart-attack inducing. And the fear that both characters felt exuded from the pages and it was SUFFOCATING. I could not turn the pages fast enough and was wholly immersed in those pages, rooting for the two characters.

The final 150 pages, as they leave the citadel and need to journey together to Laurent running from the spycatcher is still fast-paced and tense but the romance takes centre stage as the characters must deal with the revelation of who they are and with the repercussion of what they had to do for their country. Athan(what a fantastic beta male he is) is in turmoil, crushed under guilt, shame and regret even though it is not his fault that he did not know that Three was Lady Petra. Saliel (what a fantastic quietly strong female lead she is) is disgusted to learn that One is Lord Ivo and has a hard time separating the two. But that is NOT ALL: dear readers, there is a lot more to this story as the two characters fall into their real identities and learn that a whole world separates them. The Laurentine society even though a more joyous and artistic than their enemy’s (Corhonase society is eerily reminiscent of Victorian times with its strict moral beliefs) is also divided into a system of castes in which Saliel and Athan fall in opposite sides and Athan must shun Saliel for her past. Add to the steaming pot the fact that Saliel has the Eye i.e. is a witch, then you have a whole source of organic conflict; specially because the characters do behave like their sets of beliefs are inherent to who they are – and it makes quite the journey to see if they can shed what is elementary to them in order to become something else, something new.

Even though there is romance permeating the first part as there is the suspense permeating the second, in the whole I thought the romance aspect was stronger than the Fantasy. This is even more evidenced by the lack of a more in-depth world-building and/or the presence of fantastic elements. There is very little background information to the war between the Corhonase and the Laurentine and very little use of magic. In fact, the magic is reduced to two characters, one of them being the heroine – and it’s much more related to how it affects this particular character than how it affects the world and society around making this a character-driven novel. And I would go as far as to say that to call this book Dark Fantasy is a complete mis-label of the book and it may lead to reader’s expectations being unfulfilled.

Particularly if you take into consideration the drama that happens when they are on the run – some of it reminded me of old school romance (and it came as no surprise when I read afterwards, that Emily Gee ‘s first book, Thief with no Shadow was nominated for two Rita awards and her next book in a regency for Harlequin Mills and Boon) but with a distinction that makes all the difference.

The reason why I disliked pretty much all of the old school romance I read so far is that the endless drama that seem to be part of the plot don’t read very organically to me. It frustrates me when the drama could have been avoided by a single conversation or how the reasoning behind some of the actions seem contrived or stemmed from TSTL behaviour or clearly there to simply add conflict. So yes, the last 150 pages of The Laurentine Spy would make Judith McNaught proud in the amount of dramatic twists and turns but whereas a Judith McNaught book generally leave me angry, The Laurentine Spy didn’t. The drama (and I am being cryptic on purpose here as to not spoil any more than I already did) , even though at times I thought it was too much, did make sense within the story as did the reaction of the characters. It all felt reasonable, believable, and realistic. The drama occurs because both characters act within the mind-set they have been born and raised into and to act any differently in those circumstances would have been a cop-out. I would go as far as to say that I would probably act the same way had I been in their shoes and yes, that goes for both Saliel and Athan’s actions. Having said that, because it was realistic, the drama was pain-inducing and heart-wrenching but also very fulfilling in the way it served the story and served the characters’ relationship to progress.

I could not ask more from a character piece and putting aside the expectation that I had for a pure fantasy novel and the surprise I felt for getting more romance than I asked for, The Laurentine Spy was a great read indeed.

Notable quotes/ Parts: every time they had an encounter with the spycatcher: I felt like my heart would come out of my chest. Athan’s journey of self-discovery.

Verdict: A great, exhilarating and dramatic read with a lot of romance

Rating: 7 VERY GOOD and leaning towards an 8

Reviewing Next: The Name of the Wind by Patrick Rothfuss