Marvel’s recently announced plans to release a Captain Marvel movie, sparked a new interest in a character I knew nothing about beyond the fact that I always associated Captain Marvel with its male incarnations. Cue me being super excited to learn the new Captain Marvel is a woman, Carol Danvers, previously known as Ms Marvel. 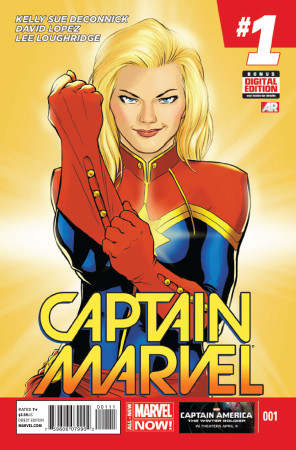 Hero! Pilot! Avenger! Captain Marvel, Earth’s Mightiest Hero with an attitude to match, is back and launching headfirst into an all-new ongoing adventure! As Captain Marvel, a.k.a. Carol Danvers, comes to a crossroads with a new life and new romance, she makes a dramatic decision that will alter the course of her life – and the entire Marvel Universe – in the months to come. But as Carol takes on a mission to return an alien girl to her homeworld, she lands in the middle of an uprising against the Galactic Alliance! Investigating the forced resettlement of Rocket Girl’s people, Carol discovers that she has a history with the man behind the plot. But when the bad guy tries to blackmail Carol and turn the Avengers against her, it’s payback time! Guest-starring the Guardians of the Galaxy!

Marvel’s recently announced plans to release a Captain Marvel movie, sparked a new interest in a character I knew nothing about beyond the fact that I always associated Captain Marvel with its male incarnations. Cue me being super excited to learn the new Captain Marvel is a woman, Carol Danvers, previously known as Ms Marvel.

Pause for an aside: colour me perplexed to find out that this is a reboot of a reboot and both are by the same author? There are two other volumes featuring Carol Danvers as Captain Marvel from a few years ago but now, this new volume is not volume 3 but volume 1. Ok, so NEW new adventures.

Oh, comics, you confuse and amaze me.

Higher, Further, Faster, More follows Carol Danvers – the new Captain Marvel – as she tries to forge a new path and identity for herself, in space.

Carol Danvers has it all: super-awesome-powers, a job as a member of the Avengers, and dating The Iron Patriot is no shabby thing either. But she is restless and when the opportunity presents itself for her to go into deep space on a mission to help a young refugee return to her homeworld, she takes it. This journey lands her in the middle of an ongoing struggle between the Galactic Alliance and the refugees of a forced resettlement.

In addition to finding Carol’s journey engaging, I appreciated very much the treatment given to the particular social-political storyline. Yes, Captain Marvel is the big superhero who will grandiosely and awesomely stand alone against a whole fleet of battleships to defend a planet (because she can, that’s how powerful she is) but the story cleverly circumvents a problematic White Savior Complex storyline because the people down there are doing their own thing, fighting their own fight, finding their own way out of their problems with a plan that combines diplomacy and dramatic shenanigans starring All The Awesome Ladies.

With a cool cameo by the Guardians of the Galaxy, interesting secondary characters – including a lesbian engineer who introduces herself as “goddess” – and a main character with oodles of charisma, empathy and wit, this volume was pretty cool and pinpoints the start of my rekindled interest in comics. You can expect more reviews soon.

I couldn’t have asked for a better introduction to a character – and a new author – I knew very little about.

1) Like I said, reading this sparked a binge reading/buying spree. I will be talking about the following comics soon:

Do you have any other recommendations?

2) For more comics, I talked about Captain Marvel with Renay in the Fangirl Happy Hour podcast, episode 3

Over at Kirkus: Authority by Jeff VanderMeer