There are those books that grab you by the throat and don’t let go. Infandous is one such book. This is a short review of a short novel that is perfectly concise in its telling, beautiful in its writing, featuring a narrator with a strong voice and a story that is moving, discomfiting and ultimately healing. 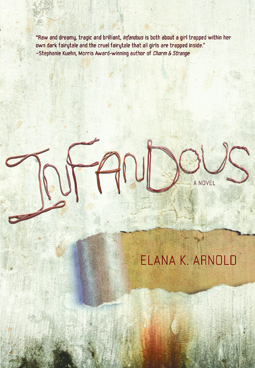 Sephora Golding lives in the shadow of her unbelievably beautiful mother. Even though they scrape by in the seedier part of Venice Beach, she’s always felt lucky. As a child, she imagined she was a minor but beloved character in her mother’s fairy tale. But now, at sixteen, the fairy tale is less Disney and more Grimm. And she wants the story to be her own. Then she meets Felix, and the fairy tale takes a turn she never imagined. Sometimes, a story is just a way to hide the unspeakable in plain sight.

Why did I read this book: I recently read – and adored – Bone Gap by Laura Ruby. Then I started seeing those who also loved Bone Gap, recommending Infandous as a similar reading experience. I had to check it out.

Too odious to be expressed or mentioned.

There are those books that grab you by the throat and don’t let go. Infandous is one such book. This is a short review of a short novel that is perfectly concise in its telling, beautiful in its writing, featuring a narrator with a strong voice and a story that is moving, discomfiting and ultimately healing.

Following young narrator Sephora Golding, we follow her through the summer before senior year. The story, taut and precise, follows the tentative steps of a young girl in the journey to womanhood: from her relationship with a beloved mother, their fraught livelihood in a one bedroom apartment, Seph’s creative pursuits and friendships, to her sexual awakening and experimentations moving toward a sense of self-determination. The latter I feel, is very important here and is expertly dealt by the author in the way that Sephora, in spite of things outside her control and the complicated choices she makes, is shown with sympathy, care and undeniable agency.

Seph’s world is populated with hardships and poverty, casual sexism and misogyny. Interspersed throughout are Seph’s musings on fairytales and mythology from Sleeping Beauty to Demeter and Persephone, Procne and Philomela. All stories centred on young women and agency.

From the opening pages, we know something is not quite well with Sephora. There is a feeling that runs through her musings as a narrator, that hint at trauma and unease which she is trying – her hardest – to work through.

Thus, one of the best – and most affecting – aspects of Infandous is exactly this: in the telling of the stories, in the creating of her art, lies the cathartic process of working through something infandous as a storyteller and artist in an attempt to come out on the other side. To be able to breathe.

Infandous is a superb contemporary YA novel. It reminded me a lot of the way that Stephanie Kuehn builds her stories like in Charm and Strange. It is also in the tradition of other recent feminist works by Courtney Summers, Rhiannon Thomas, Sarah McCarry and Laura Ruby.

THINGS DON’T REALLY TURN OUT the way they do in fairy tales. I’m telling you that right up front, so you’re not disappointed later. Part of the problem is that we’ve all been lied to by Disney. You probably know that he whitewashed the shit out of the gory, sexy originals—what, you think a flower’s a flower?— that he made them into movies that teach little girls all they need to know to be princesses: be patient, be modest, and above all, be beautiful. If you do these things, Disney promises, then Prince Charming is coming for you and everything is going to work out just fine.

I guess my mom figured things would go down for her like Walt said. She was as beautiful as any princess. The modeling contracts she’d had since she was fifteen attested to that, along with the way the world seemed to rearrange itself to suit her. I’ve seen the pictures; I would have found it hard to say no too if the teenage version of my mom asked me for something. Hell, I find myself compelled to do the bidding of her thirty-five-year-old incarnation more times than not. But back then—the summer of her absolute apex, the summer when she was seventeen—the world was my mom’s bitch.

Her hair, for one thing. I read somewhere that guys notice hair first—before they look at tits or legs or even faces. Hair’s the first thing that raises a guy’s “ardor.” My mom’s hair is spun copper. Goldish-reddish, wavy, and gorgeous. That, combined with the fact that her name is Rebecca Golding, combined with her modeling and her better-than-average surfing abilities and her willingness to say yes to pretty much any party, at any time, raised her pedestal to break-your-neck- if-you-fall heights.

By the way, who the fuck names her daughter Sephora? I’ll tell you who. My mother. Golden girl. Fallen angel. Knocked-up model. Unwed mother. She claims she gave me the name because it means “beautiful bird” and “independent,” but bullshit. I maintain that she named me after the makeup store. (And another thing . . . about her name: Rebecca. I’d bet my ass her parents didn’t know its meaning—“beautiful snare”— when they chose it. They probably just thought it was a nice Bible name.)

Anyway, the fairy tale didn’t really turn out the way Mom had hoped. The tourist-prince who spread her petals wasn’t quite ready for happily ever after, and so he left my mother to bloat and birth all on her own. Her psycho-religious parents disowned her too, kicking her out of the respectable Marina del Rey home where she’d grown up. So she moved down the road to Venice Beach, not far from the break where she’d met my father. When I arrived, it was just the two of us, Rebecca and Sephora, in the first of a string of shitty apartments.

And the rent? (Because shitty apartments aren’t free, even for princesses.) No, we’re not getting monthly guilt checks from the grandparents. (Though Venice Beach is a convenient place to stash family embarrassments.) Since the last of the bikini modeling jobs ended where the stretch marks began, our life has been decidedly month-to-month. But this is Venice Beach. The math works a little differently here.

Over at Kirkus: The Rings of Anubis series by E Catherine Tobler