In which we give away copies of Rachel Hartman’s Seraphina and companion novel, Shadow Scale

Today we are thrilled to be a part of the Shadow Scale Blog Tour, celebrating the release of Rachel Hartman’s long-awaited and highly anticipated sequel to Morris Award winning YA fantasy novel Seraphina. We loved Seraphina (so much so that it made Thea’s top 10 books of 2012) – naturally, we were eager to get our hands on Shadow Scale and are delighted to be a part of the release day celebration. 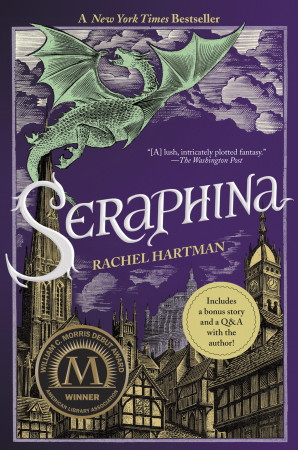 In her Morris Award-winning and New York Times bestselling debut, Rachel Hartman took our breath away with an utterly original alternative-medieval world full of dragons.

Four decades of peace have done little to ease the mistrust between humans and dragons in the kingdom of Goredd. Folding themselves into human shape, dragons attend court as ambassadors and universities as scholars. However, as the anniversary of the treaty of peace draws near, tensions rise.

Seraphina Dombegh has reason to fear both sides. A gifted musician, Seraphina joins the court just as a member of the royal family is murdered–in suspiciously draconian fashion. She is drawn into the investigation, partnering with the captain of the Queen’s Guard, the dangerously perceptive Prince Lucian Kiggs. While they begin to uncover hints of a sinister plot to destroy the peace, Seraphina struggles to protect the secret behind her musical gift, one so terrible that its discovery could mean her very life. 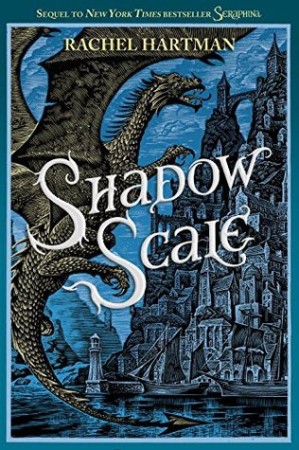 Dragons and humans battle in this breathtaking sequel to the acclaimed Seraphina by Rachel Hartman.

The kingdom of Goredd: a world where humans and dragons share life with an uneasy balance, and those few who are both human and dragon must hide the truth. Seraphina is one of these, a part-girl, part-dragon, who is reluctantly drawn into the politics of her world. When war breaks out between the dragons and humans, it is she who must travel the lands to find those like herself–for she has an inexplicable connection to all of them, and together they will be able to fight the dragons in powerful new and magical ways.

As Seraphina gathers this motley crew, she is pursued by humans who want to stop her. But the most terrifying one chasing her, is another half dragon, who can creep into people’s minds and take them over. Until now, Seraphina has kept her mind safe from intruders, but that also means she’s held back her own gift. It is time to make a choice. Cling to the safety of her old life or embrace a powerful new destiny?

We have a copy of Seraphina and Shadow Scale up for grabs, courtesy of the publisher. The contest is open to addresses in the US and Canada, and will run until Sunday, March 29 at 12:01am EST. To enter, use the form below.

And stick around for Thea’s review of Shadow Scale later today!