Today, courtesy of the publisher, we are hosting an awesome giveaway for Robert Jackson Bennett’s City of Blades, sequel to the excellent City of Stairs. 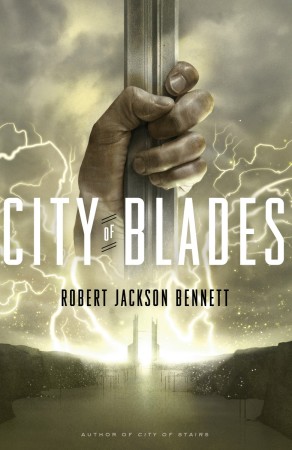 A new novel from Robert Jackson Bennett, set in the same world as his much acclaimed CITY OF STAIRS – finalist for 2015 World Fantasy, Locus and British Fantasy awards.

A generation ago, the city of Voortyashtan was the stronghold of the god of war and death, the birthplace of fearsome supernatural sentinels who killed and subjugated millions.

Now, the city’s god is dead. The city itself lies in ruins. And to its new military occupiers, the once-powerful capital is a wasteland of sectarian violence and bloody uprisings.

So it makes perfect sense that General Turyin Mulaghesh— foul-mouthed hero of the battle of Bulikov, rumored war criminal, ally of an embattled Prime Minister—has been exiled there to count down the days until she can draw her pension and be forgotten.

At least, it makes the perfect cover story.

The truth is that the general has been pressed into service one last time, dispatched to investigate a discovery with the potential to change the world–or destroy it.

The trouble is that this old soldier isn’t sure she’s still got what it takes to be the hero.

Add the book on Goodreads
Pre-order the book now.

We have 10 (TEN) copies to giveaway. Giveaway is open to US addresses only and will run until October 9 12:00AM EST. Use the form below to enter. GOOD LUCK.