Book Review: The Vault of Dreamers by Caragh M. O’Brien

A dystopian-style novel with a reality television twist, The Vault of Dreamers is solid, enjoyable YA speculative fiction.

Title: The Vault of Dreamers 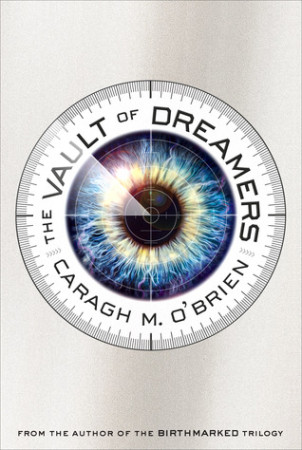 From the author of the Birthmarked trilogy comes a fast-paced, psychologically thrilling novel about what happens when your dreams are not your own.

The Forge School is the most prestigious arts school in the country. The secret to its success: every moment of the students’ lives is televised as part of the insanely popular Forge Show, and the students’ schedule includes twelve hours of induced sleep meant to enhance creativity. But when first year student Rosie Sinclair skips her sleeping pill, she discovers there is something off about Forge. In fact, she suspects that there are sinister things going on deep below the reaches of the cameras in the school. What’s worse is, she starts to notice that the edges of her consciousness do not feel quite right. And soon, she unearths the ghastly secret that the Forge School is hiding—and what it truly means to dream there.

Stand alone or series: Book 1 in the Vault of Dreamers series

Why did I read this book: I read Birthmarked by Caragh O’Brien years ago, and very much enjoyed her writing style and the basic premise behind the novel… even though the book wasn’t without its flaws. When I saw this new book last year, with it’s souped-up reality tv/sff premise, I thought it was time to give Caragh O’Brien’s work another try.

Everybody who’s anybody wants to get into The Forge School.

The elite institution for a high school degree in the creative arts, Forge is not only a school, but an immersive experience. From the thousands of applicants every year, only a group of 100 are admitted into the freshman class – and of those 100, only the top 50 are allowed to continue their education.

Who determines the top 50 and the cuts?

Why, the viewers, of course!

You see, Forge is more than just an incubator of creative geniuses of dance, filmmaking, song, and artistry; it’s also the world’s most popular reality television show. From waking to sleeping, every moment of a Forge student’s day is filmed and broadcast. Viewers can choose whom they want to follow – and with followers, of course, come advertising opportunities (money, for the student), popularity, and class ranking.

Rosie Sinclair never thought she would get into Forge. A young teen from an impoverished town, she’s certainly not the usual demographic for the school or the show (her friends, family and hometown don’t have much in the way of resources – televisions, tablets, or other computers – to watch the show and give Rosie a boost). It’s without surprise, then, when on the eve of the fifty cuts, Rosie discovers that she’s somewhere near the bottom of her class rank pack. And for that last night before she’s sure she will be sent home, Rosie decides to break the rules.

Everyone at Forge is required to sleep twelve hours a night – twelve hours induced by a special kind of sleeping pill, meant to boost creativity and productivity, though it also means an end to dreams for each pill-taking student. When the students retire in their sleep pods for the evening, the cameras stop rolling, and all is silent…or so Rosie thinks. She skips her sleeping pill on the eve of the cuts, desperate to gaze upon the night sky, and see her school from a different angle one last time.

What she discovers, however, is an insidious secret that administrators at the Forge School will go to great lengths to hide. Doctors perform tests on sleeping students. Whispered talks about “mining” and “seeding” the children (and their dreams) ensue. There are stakeholder calls, and hushed explanations of Forge suicides and accidents, and frightening experiments.

Rosie is determined to find out the truth about Forge – or pay the ultimate price.

A dystopian-style novel with a reality television twist, The Vault of Dreamers is solid and enjoyable YA science fiction. Set in the near future, in a post-war world with some technological advancements and socioeconomic decline, this book seems (at least from the synopsis) to be a deep dive into a reality television-obsessed culture…but it’s not. The Vault of Dreamers is more The Truman Show than Flash Point; told from the perspective of Rosie from within the school, there’s very little actual interaction or understanding of what outside viewers are seeing and how they are interacting with the Forge show. Instead, this book focuses on two tracks: the maneuvers Rosie makes to stay in the top 50 (pseudo-real romantic interest, plus human interest drama), and a fraught storyline about dreams, secrets, and Rosie’s mental health.

The first part of the story – Rosie’s standings in the school and her friendships with more popular/higher ranking students – is… interesting. Unexpected, even. When reading her narrative, Rosie never comes off as ruthless or calculating, though all of her actions could certainly be interpreted that way. She befriends popular students, sparks up an on-camera romance, takes to videotaping students in order to make the last minute cut. She undeniably does what she has to in order to stay in the school, but without sacrificing her integrity (and should anyone call her out on being manipulative or crass, Rosie sticks up for herself beautifully). I love that about her character. I also love the genuine friendships she makes with her fellow students, in particular the surly Linus, the intelligent Burnham, and charismatic Janice.

The second part of the story, though – the driving part of the story – is somewhat more fraught. This is a speculative fiction novel at its heart, and a story about the secrets a school holds over its mandatory-sleep-induced students. What happens when one’s dreams are taken? When sleep is monitored and manipulated, what happens to the sleeper? What is that voice Rosie is hearing – real, or is it all the projections of a stressed mind? While I like the ideas presented in The Vault of Dreamers in theory, in practice, things are a little too nebulous for my liking. The dream mining and seeding angles aren’t ever fully defined or explained, and I wish there was more there (less of the “is she suffering from a nervous breakdown or is it all real” tension for more of the actual science fictional elements). Also, while the last quarter of the book ratchets up the action and stakes, it’s all incredibly rushed and frustratingly dissatisfying (particularly that cliffhanger ending).

Still, these criticisms said, I enjoyed The Vault of Dreamers very much – much more than I thought I would. I’ll be back to see where Rosie’s journey takes her next, in the hopes for a little more definition and overarching plot development.

I missed night. I had other reasons to disobey, too, like wanting to escape the cameras, but most of all, I missed the deep, vacant darkness of night.

We lined up as usual, shivering in our bare feet and nightgowns. Rain streamed down the windows, obscuring the gray view of the prairie, and the patter sounded gently on the vaulted roof overhead. Orly passed out the pills, starting at the far end, and I watched as each girl obediently swallowed, climbed into her sleep shell, and slid her lid closed with a soft swoosh.

When Orly reached me, I took my pill like the others but faked tossing it back. Instead, I lodged the disk up alongside my gums before I took a sip of water and opened my mouth for her inspection.

She turned and went on to the next girl.

I’d won. I climbed in my sleep shell, spit the pill into my hand, and wedged it under my pillow.

“Close your lid,” Orly told me.

“Do I have to?” I asked. “I like the sound of the rain.” “You can open it again after your brink lesson if you want,” she said. “Sleep well.”

When Orly switched off the lights, the room went the soft, gray color of childhood naps. I pulled my lid closed to watch the brink lesson cast across the glass: a scene of a woman laying bricks, tucking them evenly in a row. What I was supposed to learn from it, even subconsciously, I couldn’t tell. Afterward, I slid open my lid again and rolled over on my pillow. Across from me, the next girl fell asleep easily and completely, and from the uninterrupted sound of the rain, I knew forty-eight other girls fell asleep on schedule, too.

Myself, I was secretly, deliciously awake. As the hour brought the darkness closer, I lay fidgety with hope and relished how it felt to be alone, stealing back the real me. The windows darkened like a gift until I could see the faint, blue reflections of our domed lids in the glass. A nearly invisible glow fell over the dormant faces, making the girls’ skin gleam with faint phosphorescence, as if they had been chalked and scanned under a black light. I slowly waved my fingers before my face, testing. The glow gave my fingers a staggered trail of black shadows, like cartoon lines of motion, tracks in the air.

Deep night came at last, bringing me more awake than ever. After nine nights of drugged sleep, my nerves seemed to have lost the trick of falling asleep naturally on their own, and now they worked in reverse, lighting me up within. To watch the night out my window was not enough. I wanted more.

It was a risk, breaking the rules, but following them hadn’t done me much good, either. I had to face facts. With the fifty cuts happening the next day, this could well be my last night at Forge. I didn’t want to waste it sleeping. From outside, the bells of the clock tower tolled midnight, until the twelfth bong resonated away to nothing.

Slowly, I sat up to look around the room.