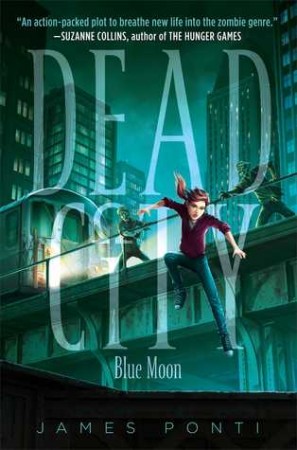 Molly is ready for more nonstop, undead action in this follow-up to Dead City, which Kirkus Reviews described as “a fast-paced read for those who like their zombies with just a little fright.”

When Molly Bigelow discovered that zombies shared New York with humans, she didn’t think life could get more shocking. Then she learned that her mother was once one of the greatest zombie killers ever—and she discovered that her dead mother is not technically dead at all (although she isn’t alive, either).

Molly’s efforts to keep these secrets and to help her Omega team track down the identity of the original thirteen zombies will take her from the Macy’s Thanksgiving Day parade to New Year’s Eve in Times Square. Her loyalties to friends and family will be put to the test. And her life will be changed in ways she never could have imagined.

Stand alone or series: Book 2 in the Dead City series

Why did I read this book: I recently read and loved the first book in this middle grade series, Dead City. When I learned the second book would be coming out this month, you bet I jumped on it immediately.

**WARNING: This review contains inevitable, unavoidable spoilers for book 1 in the series, Dead City. If you have not read book 1 and want to remain unspoiled, LOOK AWAY.**

After narrowly escaping death at the hands of Marek – an extremely powerful level 2 zombie and one of Manhattan’s original “unlucky 13” (i.e. the city’s first zombies) – Molly Bigelow counts herself a very lucky young woman. But even though she’s survived a death-defying stint on the George Washington Bridge and thwarted Marek, things aren’t all sunshine and ponies. Rules have been broken, and Molly and her Omega team face serious consequences – they’ve been suspended from active duty and barely squeak through a formal Omega hearing to determine their ongoing membership in the world’s only zombie-policing force. Now that Marek is gone, New York’s undead population is in a period of upheaval – with zombies vying for power over Dead City, things are extremely volatile and Molly and her friends are given the important task of keeping tabs on the remaining original unlucky 13.

To make matters worse, Molly grapples with the biggest secret of them all: her mother, who died of cancer just a few short years before, has been revived as one of the city’s undead. Unwilling to tell her friends or her family about her mother’s undead state, Molly keeps this secret close. But at some point, the truth will come out, and Molly’s loyalties – to her friends, to the Omegas, and to her family – will be tested.

The second book in James Ponti’s Dead City series, Blue Moon picks up just a short time after the conclusion of the first book, and continues young Molly Bigelow’s story. I was pleasantly surprised by the strong characterization and imaginative worldbuilding in Dead City, and I’m happy to report that Blue Moon is every bit as entertaining and wonderful as its predecessor. In fact, it answers a few niggling questions and expands on the backstory of Manhattan’s undead – there are some early interspersed chapters from the point of view of Milton Blackwell in 1896, one of the original zombies and the man responsible for the ill-fated subway blast that tore a hole through the Manhattan schist and caused the dead to come back to life. I also loved that in this second book, we see more of the Omega history, too. We learn who started the secret underground zombie-policing service, and just how entrenched with politics and power figures the Omegas are – including some CIA classified documents, Cold War scenarios, and the involvement of former United States President Teddy Roosevelt. While some of the answers are a little hard to swallow, and I’m a little skeptical of the reasoning behind the creation of the Omegas and the logic behind enlisting tweens and teens, I do appreciate that there is some explanation given in this second book.

Blue Moon also ratchets up the action several notches, as well as the mystery-solving element to the series. There’s a nefarious plan that will affect the living and the undead in this second book (from which the novel gets it’s title, “Operation Blue Moon”) and adds a layer of wonderful urgency to the book. How Molly and her Omega friends get to this truth and solve the mystery of the undead’s plans leading up to a very important deadline is also wonderful good fun. Heck, in truth the Dead City books are akin to Scooby Doo cross-bred with National Treasure. You’ve got historical mysteries and complicated secret codes, all solved by martial arts-trained brainy science and math savvy meddling kids who inevitably save the day. How could you NOT love that?

On the negative side, while I love the ongoing action, I did feel that the characterization isn’t quite as strong in this second book. But perhaps that’s ok, because the focus here is on backstory, worldbuilding, and answer-gathering. There’s a hard deadline to solve a particular mystery in this book, after all, and character depth is pushed to the backburner. Still, I love the interactions and growing friendship that blossoms between the main characters, especially the trust issues that Omega team leader Natalie has with the brilliant young Molly. At one point, Alex draws the analogy that their team is kinda like a band – Natalie is the powerful front singer that is their voice and leader, Molly is the brilliant (if sometimes problematic) lead guitarist, Grayson is the solid and irreplaceable bass player, and Alex the drummer that makes sure everything stays on tempo. It’s brilliant and very, very fitting – this is a band that isn’t without its missteps, but they are there for each other, and I love reading their brand of strong friendship.

Moreso than the friendship dynamics, however, the thing I love so much about Blue Moon is the family dynamic. Even though this is thoroughly a secondary storyline, it’s refreshing and awesome to see a functioning family in YA and MG fiction. I love the relationship between Molly, her older sister Beth, and their father; mostly, I appreciate that Ponti shows that they are a family that struggles with loss, but at the same time it’s a family that relies on each other and makes the time to do things together. Most of all, and as I said in my review of Dead City, I really love the relationship between Molly and her prickly seventeen-year-old sister Beth – even though there’s exasperation and bickering there, there’s also love and understanding (not that they would EVER admit or say those things to each other). In Blue Moon, we also get this fascinating tension between Molly and her zombified mother – understandably, Molly’s mom doesn’t want her husband or other daughter to know that she’s still around (the rest of Molly’s family has no knowledge of the zombie family legacy). But this puts added pressure on Molly to keep her mother’s existence a secret from both her fellow Omegas and from her family – not to mention the fact that Molly herself is grappling with the shock, anger, and exhilaration of reuniting with her dead mother. It’s a fascinating, heartbreaking mother-daughter dynamic, and I’m a little nervous because you KNOW this will lead to some sad end. (Or maybe I’m just being pessimistic…)

Finally, I’d be remiss if I ended this review without mentioning the thematic complications at play in Blue Moon. I love that the undead are not portrayed as simple monsters who are hell-bent on power, or brains, or otherwise destroying the living. In fact, may of the undead are simply trying to carry on with their lives – this gets even more interesting when you consider the complication of past Omegas who are now zombies. In this second book, we don’t really see this divide in too much depth, but I appreciated the divided opinions regarding the living and the undead – Alex, for example, is very untrusting and even prejudicial when it comes to trusting the undead. There’s plenty of meat here for future books, and I sincerely hope that James Ponti continues with this particular thread in the next book.

Overall, Blue Moon is an entertaining, action-filled sequel, that finishes with a heck of a cliffhanger. I’m enjoying this series very much and cannot wait to jump back into the fray with Molly and her Omega buddies in book 3! Absolutely recommended, especially for the Halloween season.

Notable Quotes/Parts: You can read the first pages of Blue Moon here.

Additional Thoughts: James Ponti was this month’s newsletter guest – check it out for a Q&A with the author and more information about his Dead City books!

Reading Next: Brothers in Arms by Lois McMaster Bujold 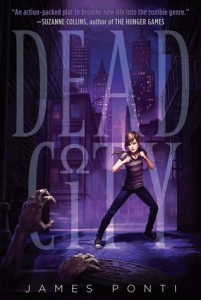 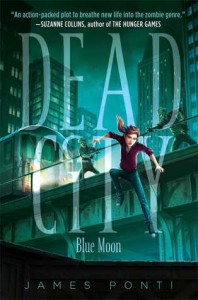 I love this series so much that we’re giving away a copy of Dead City and Blue Moon to a lucky winner. The contest is open to ALL and will run until Sunday October 20 at 12:01am EST. To enter, use the form below. Good luck!