From the Page to the Screen: Kick-Ass 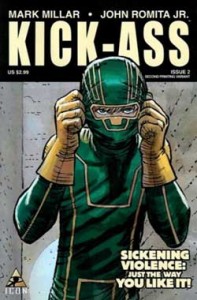 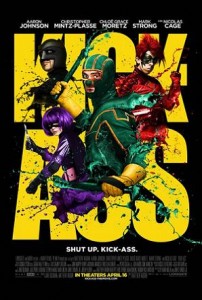 Dave Lizewski, is just your regular geeky guy: he is not the class jock, or the class clown, he is not super cute or super smart. His life at home with his father (his mother died suddenly when an aneurysm hit her) is ok and he has a couple of friends with whom he shares his love for comic books and superheroes. One day, he starts to wonder: why hasn’t anyone donned a mask and went around saving people? Really, why not? 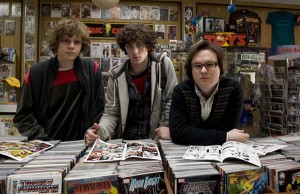 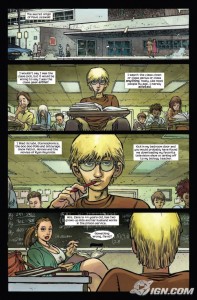 So that’s what he does. He buys a costume and starts wearing it under his every day clothes, starts exercising and then one day comes across two blokes stealing a car. He confronts them and the outcome of that is both surprising and yet….not really.

Nothing will stop Dave though and he carries on his attempt of being a super-hero calling himself Kick-Ass. His next confrontation is more successful and this fight is captured by an onlooker who updloads a video on Youtube. He becomes an overnight success and creates a MySpace Page where people can contact him for help. Meanwhile at school, he becomes friends with his number one crush Katie, who thinks he is gay. He carries on the pretense to spend time with her as her “Gay BFF”.

Unbeknownst to him, a totally deranged duo of father and daughter –Big Daddy and Hit Girl – are already fighting crime in secret and their main target is mobster John Genovese. Then a new makeshift superhero called Red Mist shows up and he and Kick-Ass team up and end up getting involved in the war between Big Daddy, Hit Girl and Genovese and this is when he learns that being a super-hero is not really easy peasy.

Now, the interesting thing is that the script of the movie was written at the same time that the comics were being written and at first sight, the movie is an extremely faithful adaptation of the book. Kick-Ass, the movie is almost a word by word rendering of the basic plotline of the comics (Genovese is called D’Amico though).

Because of the similarities my overall thoughts can be applied to both comics and the movie. Ruthless, bleak, extremely violent and yet super cool and fun, that is Kick-Ass condensed in a few words. 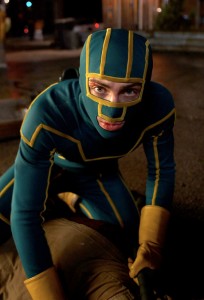 Visually speaking, the art in the comic is great and I didn’t expect less from Romita. The movie though is even greater and it has awesome action sequences (all with a great soundtrack in the background), great acting from the main character Kick-Ass, Hit Girl and Mr Nicholas Cage who all of a sudden reminded me how good of an actor he really is. His Big Daddy hits all the right notes of both lunatics and poignancy.

Cinema and Comics are the perfect medium to tell this story because of the rich imagery of violence – a violence that is present in almost every panel of the book and almost every sequence of the film. I am not exaggerating when I say this and I need to stress it: this story in either format is not for the squeamish. Our hero is beaten up, shot, stabbed, trampled, tortured, all in graphic detail. 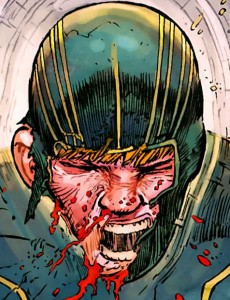 The greatest violence though is the one suffered and realized by Hit Girl. As much as Kick-Ass/Dave is our hero the true star of this movie/comic is her. An 11 year old girl, who has been trained by her own father to be a killing machine and she is. She is the most violent character of the film/comic, and if you have any possible issues with a 11 year old (who looks and behaves like one) being beaten up or beating up (and cutting and stabbing and shooting and beheading) other characters whilst using the most foul language possible, well you’d better stay away from this one. 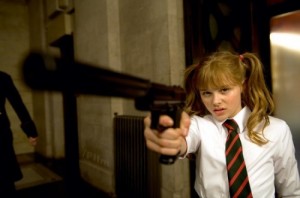 For better or for worse though, she is going to be a cinematographic ICON, or else I will eat my hat. She is like Tarantino’s The Bride in miniature and on steroid. However, the true violence here is how this girl has been deprived of a childhood by a crazy father bent on revenge. 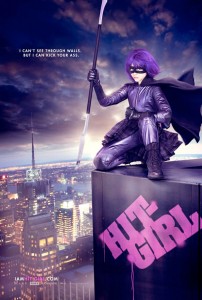 The movie succeeds in showing that better than the comics and here is where the main difference between the two lies. In as much the movie is a very faithful adaptation it also departs from its source where it matters the most. The movie puts a much bigger emphasis on the characters’ emotional journeys than the comic does. By doing that is changes the very essence of the story – three of the characters change so much as to be completely different entities and to me, much more sympathetic ones for it. I am also sure, that those who love the comics might find that a coup out, an attempt of being emotional when the comics try to be the opposite. 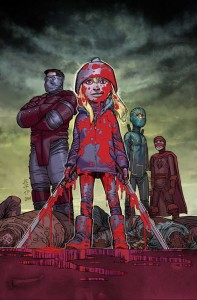 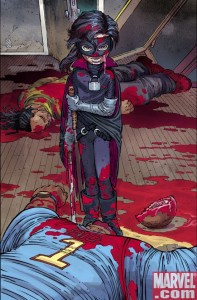 Because the comic Kick-Ass strives to be a “realistic” insight about the super-hero phenomenon stripping super-heroes of their power and looking at the men behind the masks. I can not help however, but to point that others have done that before and more successfully in my opinion. If you look at comics and graphic novels of the past years: Marvel’s X-Men are a bunch of superheroes that navigate in a very grey area of morality. If you want to be a stickler and compare Kick-Ass to those who don’t really have superpowers, you also have DC’s Batman and Alan Moore’s Watchmen (with the exception of Dr Manhattan).

The Dark Knight Returns, and Batman: The Killing Joke for example are awesome examples of a Super-Hero/Vigilante stripped bare in front of an audience as it portrays Batman as an almost lunatic with an unerring sense of justice who might well belong in Arkham Asylum himself. Same thing with Watchmen, a most aggravating group of vigilantes full of psychological problems behind their marks: including impotence, mommy issues, obsession, etc.

How is this any different from what Kick-Ass tries to do? Well, the biggest difference between those and Kick-Ass lies in motivation. No matter how ugly, dark, bleak things get in the aforementioned examples, the characters are indeed motivated by (maybe misguided) a sense of Justice regardless of which form it takes and how far they are willing to go to serve it. This is perfectly embodied by Watchmen’s Night Owl who is indeed a hero. At the end of the day, I think this is what we really want isn’t it? I know it is what I want: I love to see a different side to heroes, and I love all the grey area they might navigate in and how they are not goodie-goodie like say, Super-boring-Man but I do want to see some sort of heroism somewhere. I want to root for and side with these guys. That is the whole idea and dream behind my love for super-heroes as naïve as it can be.

Kick-Ass is a character who doesn’t really have any motivations except being bored with his life and afraid of his future. He only ever becomes heroic when there is something in it for him, or when he is connected with the victims somehow. This is why perhaps, I LOVED the movie more than the comics, because at least some of the characters do have a better motivation and because the movie is a much more emotional journey, I was able to connect with and really like the characters.

But maybe, maybe, and here might be the genius of the story as intended by Mark Millar, this is the point: that Kick-Ass so well captures the nihilism of the noughties. It is well within reason to believe that in our era a teenager would become a super-hero because he wants celebrity status, to get the hot girl and more friends in his Facebook page and not because of some misplaced sense of heroism. Because really, that is so fifties, isn’t it?

In that sense, it is extremely realistic in the way that it shows us an image of our times – the truth of it (almost) literally bleeds away from the pages or from the screen. It might not sound like it, given my criticism, but I absolutely loved the comics and ADORED the movie. It is one of my favourites of the year.

Over at Kirkus: Where Futures End by Parker Peevyhouse