Hey folks, we have a brand new segment! Our delightful buddy Harry, from Temple Library Reviews will be joining us once a month to review paranormal romance from a guy’s perspective. But we will let him introduce himself, please let’s give a warm welcome to Harry!

I’m not sure whether Ana & Thea have made it public, but I’m the newest honorary addition to the Book Smugglers team [honest to God, I smuggle books home and then lie straight to my family’s face about it]. I get the chance to play here at their blog once a month and my small spot will be called ‘A Dude does PNR’. The idea came to be in December, when I posted my Sherilyn Kenyon review and people were interested to see the male POV about Paranormal Romance. The public demands, the attention whore (that’s me) begs, and the smugglers comply. For my christening into the official Smuggler family I have been given “Circle of Fire” by Keri Arthur. 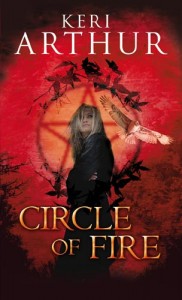 Stand Alone or series: First book in the Damask Circle

Why did I read the book: Ana had lined three novels and the summary made this one a succulent choice.

How did I get the book: Ana mailed it to me.

Summary: Sixteen teenagers taken from their homes. Eleven bodies recovered, each completely drained of blood. Some believe vampires are responsible, but Jon Barnett knows it’s something far worse. To stop the killers in Taurin Bay, he becomes enmeshed in a web of black magic and realizes he needs help. But fate gives him only one choice in the form of recluse Madeline Smith.

Madeline Smith has retreated to an isolated farmhouse, afraid of the psychic abilities she can’t control-abilities that have killed. But when “ghost” Jon Barnett brings a warning of danger and her nephew disappears, Maddie has to leave her haven. She also has to learn to control the abilities she fears and place her trust in Jon Barnett, a man who is neither human nor ghost.

But as the search for the teenagers becomes a race against time, and the noose of sorcery threatens to kill Maddie and Jon, the greatest danger to them both could be the feelings they have for each other-feelings that they refuse to acknowledge.

What happened between my reader personality and Circle of Fire can be best described with a typical wedding reception scenario. I was sat on a table with a good looking lady, a promise to have a swell time drenched in conversation. However, after the introductions the conversation ran out of topics and although the time spent together had a few good gems, in the very end I was left utterly bored and the fine lady entertained her neighbor better. I call this the ‘click factor’. Either you almost hear the click sound, when your hands grab the book in standard reading position or you don’t. In the case with Circle of Fire, my ears were deaf, but even so the ride was not all lows. It had a few highs and perks.

Paranormal Romance is a feel-good genre. Compared to all the genres out there, the PNR is the spicy, exotic and sinful meal, which you feel instant guilt about afterwards, but damn it, if you don’t feel heavenly in the moment of consumption. So, I keep wondering, why the heck do all series I have had the opportunity to read feature ominous, big scale [epic] central or otherwise plot lines. Sure, I guess the big bad thing out there ready to bring some distant cousin of the Judgment Day ensures that the series will have a big number of installments, but I don’t see it as necessary. I thought it was refreshing that Arthur decided to have a modest start with one case, which was more or less isolated and personal rather than introductory and the inkling of a storm.

The story is straightforward. The objective is clear: find the missing children and for Maddie to bring her nephew home. In order to achieve that Maddie has to pair up with Jon, the resident brooding hero, who customary for the genre is a shapeshifter. Both aren’t the best match for this investigation, since Maddie [despite her precognitive and fire starting powers] is largely ignorant about the supernatural world. This trait puts her in danger and jeopardizes the whole investigation. Although the opening chapters seemed filled with promise, especially with the way how Maddie and Jon meet, after that I hit déjà vu lane at parade speed and knew just about everything that was going to happen. Call me precognitive…

You may argue that more or less, everything has been said and done as far as plot goes, but it isn’t impossible to give well known formulas a fresh polish, a new spin, some tuning. What worked against from this happening was the lack of meat on the story’s bones. Three hundred pages [barely 300, mind you] is not the healthy, solid bedrock to develop a high adrenaline adventure and a believable romance. Then there’s Arthur’s prose, which left me neutral. I did not feel grabbed by the way she expressed herself and for me prose is a determining factor to whether I enjoy a novel or not. With Circle of Fire I felt largely unattached with where it went and I felt like I was being told rather than shown. I still can’t shake the ‘clutches’. It’s just not how I roll these days.

World-building-wise things headed into a right direction, but never got anywhere. True, there is an avian shapeshifter and not the standard hairy, possessive alpha male. True, the big baddy has a diversified goody bag with ways to kill the protagonists, but there is no actual depth to make this exciting. I had questions about shapeshifters in general, the rules as far as magic is concerned and what not, but that was largely unanswered. I also couldn’t buy that Maddie could so easily figure out how to learn the ropes with her precognitive powers, after a single mention that control was possible. Given her background and the grief her powers had given her, I would suspect it was the opposite.

Last, but not least, the romance. From a logical standpoint, what Arthur did is sound. Maddie was a victim of physical and psychological abuse, so a sensual and naughty relationship was not the best route to take. The romance here is more or less platonic, melting the ice walls both protagonists have raised for different reasons and admitting that love stuck both ends of a long spaghetti strand in their mouths with the intention to get a kiss at the end. I admit that I am a fan of the idea and the actual ending of Circle of Fire was endearing, but getting there was a journey that seemed forced, raw and inorganic. Both protagonists switched between what the Freudian IT wanted [getting it on] and what the EGO [from bad experience] dictated as best course of action [aka straying away from love]. I understand from where this inner dilemma stems and yet the way it was handled did not suspend my disbelief or cemented my conviction that the happily ever after was rooted in reality.

Verdict: I didn’t click with it. I can’t call this a bad novel, because it isn’t. I am sure that this one will be a perfect fit for somebody else, but Circle of Fire can’t provide what I need from a book. Yeah, I am a picky and needy bastard.

Rating: 5 Meh, take it or leave it

Reading next: The Battle Sylph by LJ Macdonald

Over at Kirkus: Updraft by Fran Wilde