Book Review: Into the Forest by Jean Hegland

Title: Into the Forest 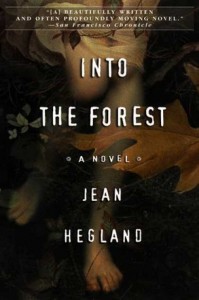 Why did I read this book: I love apocalyptic and post-apocalyptic fiction, and saw this book while browsing the section on amazon. How could I refuse?

Summary: (from amazon.com)
Set in the near-future, Into the Forest is a powerfully imagined novel that focuses on the relationship between two teenage sisters living alone in their Northern California forest home.

Over 30 miles from the nearest town, and several miles away from their nearest neighbor, Nell and Eva struggle to survive as society begins to decay and collapse around them. No single event precedes society’s fall. There is talk of a war overseas and upheaval in Congress, but it still comes as a shock when the electricity runs out and gas is nowhere to be found. The sisters consume the resources left in the house, waiting for the power to return. Their arrival into adulthood, however, forces them to reexamine their place in the world and their relationship to the land and each other.

Reminiscent of Margaret Atwood’s A Handmaid’s Tale, Into the Forest is a mesmerizing and thought-provoking novel of hope and despair set in a frighteningly plausible near-future America.

In their isolated home sheltered by the forest, Nell, Eva and their father live quietly through the crumbling of civilization. Torn by economic depression and commitments to wars overseas, the fragile nation’s infrastructure breaks under these pressures, leaving society in shambles. For the most part the small family goes on with their lives and endures, until an accident kills their father, leaving Nell and Eva truly alone in the world. Into the Forest is the tale of these two sisters and how they endure — the threat of starvation, the loss of their mother to cancer and their father to an accidental death, the threat of desperate intruders, and most of all, the internal struggle to fend off despair, and the tenuous bond between two sisters.

From the first page, I was hooked by Jean Hegland’s lyrical prose and the beautifully honest narration of the seventeen year-old protagonist, Nell. There are three main characters in this novel: Nell, the practical, studious narrator, devoted to reading and her studies; Eva, the slightly older, impulsive sister, devoted to ballet; and the Forest itself, beckoning, elegant and primal. Nell’s narration, written in a journal given to her by Eva as a Christmas present, describes the family’s life before the inexplicable crisis, and how they began to adapt to life without civilization. Nell remarks of the early days, when mail did not come every day and their were brief periods where the electricity would fail:

It’s amazing how quickly everyone adapted to those changes. I suppose it’s like the way people beyond our forest had already gotten used to having to drink bottled water, drive on overcrowded freeways, and deal with the automated voices that answered almost every telephone. Then, too, they cursed and complained, and soon adjusted, almost forgetting their lives had ever been any other way.

Nell and Eva have an advantage over their town and city residing counterparts as their isolation has prepared them somewhat for the days when electricity and running water becomes a rarity. While the struggle to save food, to plant gardens of fresh vegetables and fruits, to can and preserve what precious fresh food they can is fascinating, the central struggle to this novel is how both sisters cope with the world ending around them. Eva turns to her ballet, practicing tirelessly to the ticking of a metronome when the electricity dies and she can no longer hear music. Nell immerses herself in her studies, resorting to reading the entire encyclopedia from cover to cover. Ever since Eva discovered ballet, Nell feels that they have grown apart — a chasm that is only exacerbated now by their isolation and growing despair. The sisters argue about what their next step should be — whether or not to use the remaining gas on powering the generator, or saving it until it is really necessary; how to share and ration their food each day, etc. As the distance between the sisters seems at its furthest when Nell decides she wants to turn away from their home in the forest and walk eastward to rumored cities with electricity and civilization, they realize how much they need each other, and what they must do to survive.

They come to the understanding that clinging to these last vestiges of their old lives — Eva’s expectation to join the San Francisco Ballet Company, Nell’s acceptance to Harvard — is futile. It’s a truly poignant revelation for the story, and a beautifully poetic ending to this haunting tale when the sisters forsake their old hopes and dreams for that final, ever-present character in this novel: the forest.

The most impressive thing about Into the Forestbesides the well constructed characters is the manner in which the story is told. This debut effort by Jean Hegland shows off a distinct, lyrical style and makes her mark as a bold new talent in the literary field. When I read a book, I often note or flag sections that speak to me — and by the time I had finished Into the Forest, I had nearly a third of the book tagged with such passages.

While this is by no means a perfect book, and I suspect it will speak much more to female readers than to males, it is a wonderful addition to the post-apocalyptic literary canon. I wholeheartedly recommend it to lovers of books across genres, and I look forward to reading more from this talented new author in the near future.

The tulips are blooming, a brilliant, worthless wall, separating us from the forest, dividing nothing from nothing. If I could feel, I think they would make me angry. They are a gesture so futile that now I think I was right not to help my mother plant them, for what are they but a hoax, a fraud, another lie?

Here I sit in the cave of a room where once, in another lifetime, I ate popcorn, played Scrabble, and watched videos with my family. Now I look out at my mother’s tulips and contemplate suicide.

It’s a physical urge, stronger than thirst or sex. Halfway back on the left side of my head there is a spot that longs for the jolt of a bullet, that years for that fire, that final empty rip. I want to be let out of this cavern, to open myself up to the ease of not-living. I am tired of sorrow and struggle and worry. I am tired of my sad sister. I want to turn out the last light.

I could do it.

I could rise from this chair, say, I’m going out for wood. Eva would give her mute little nod, but she wouldn’t look up, not even to see me lift the gun from its post by the door.

I could open the door. I could step outside, could close the door forever behind me. Break through the ring of my mother’s tulips. Enter the twilit woods, the gun stiff at my side. Push a new path through the forest. In some dim circle of trees, I could sit down on the earth. Take off my shoe. Work my toes into the cold ring of the trigger guard. Fumble the trigger until it gave.

I am my own person, after all.

Additional Thoughts: Into the Forest is a beautifully written book, but it does contain one scene which may be a ‘deal breaker’ for some readers (i.e. Ana loved Stephen King’s It, save for one scene near the ending that completely turned her off the the book to the point where she could neither read more nor merit giving it a grade above a “1”). I’m not a reader that has any ‘deal breakers’ — I can take pretty much anything, and even the most unsavory of plot points will not throw me. There is one such scene in this novel, and while I do agree that the scene was gratuitous and completely threw me, it certainly didn’t deter me from finishing the novel or detract from my impression of the book as a whole.

Consider this your Caveat Emptor, if you are a reader with deal breakers…

Verdict: Into the Forest is a lyrical, beautiful novel about the end of civilization, and the struggle of two sisters to endure and adapt to a new world. It is a poignant, touching work that I encourage everyone — readers of apocalypse fiction and literary fans alike — to try.

Reading Next: The Forest of Hands and Teeth by Carrie Ryan