Book Review: The Boy on the Bridge by M.R. Carey

Title: The Boy on the Bridge 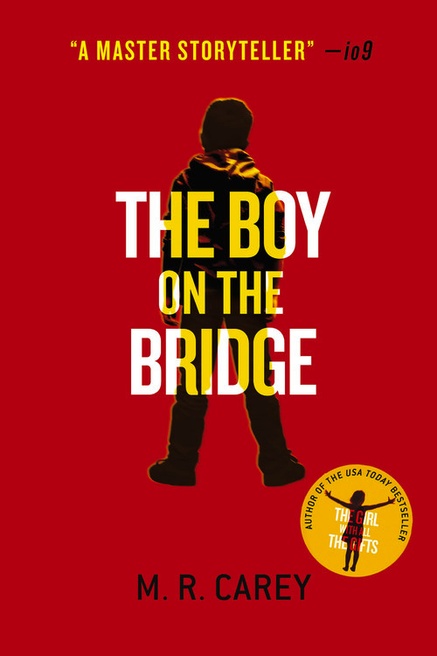 Once upon a time, in a land blighted by terror, there was a very clever boy.

The people thought the boy could save them, so they opened their gates and sent him out into the world.

To where the monsters lived.

Stand alone or series: Companion novel to The Girl With All the Gifts

It’s the end of the world as we know it.

The dead have risen: hungry, fast, impossibly attuned to any life form that might offer them sustenance. Humanity faces its fastest and greatest extinction event–already, the majority of the world’s population has been decimated by a mysterious fungal plague. In the midst of this death and chaos, however, there is still hope. A small band of soldiers and scientists have braved the apocalyptic landscape, driving from Beacon up towards the Scottish Highlands to gather more information about the deadly Cordyceps fungus in the hopes of finding a cure. At the heart of the mission are two very important people: a scientist named Samrina Khan, and a brilliant fifteen-year-old boy named Stephen Graves. Rina is vital to the mission for her research and for her closeness to Stephen, but is disguising a second trimester pregnancy. And Stephen–brilliant, complicated Stephen–is on his own very special mission of observation and research.

As the crew of the Rosalind Franklin makes its perilous journey northward, gathering samples and collecting data, Stephen watches the “hungries”–and makes a discovery that could change everything.

Set ten years before The Girl With All the Gifts, The Boy on the Bridge is both a prequel and a companion novel. I loved the first book (so much so, it made my top 10 titles of 2014) so when I learned M.R. Carey not only had a new book available this year but an honest-to-goodness companion novel set in the same zombie-ridden post-apocalyptic wasteland, I was delighted. Of course, when any sequel, prequel, or other companion novel is released to follow-up a beloved book, there is always a healthy dose of trepidation. Will this book live up to its predecessor? How could it, given the awesomeness of [xxx insert beloved first book here]? Especially in the case of The Boy on the Bridge, my trepidation focused on the fact that Carey had already told his story of political/military corruption, the end of the world, and the next generation of hungries who shall inherit the Earth. How could a sequel hope to hold up to this kind of weight of expectation? Luckily, dear readers, we are in good hands with M.R. Carey–instead of moving forward, he chooses to look backwards, ten years before the events of Melanie, Miss Justineau, and the ultimate destruction of the human race. In The Boy on the Bridge, we see the same sort of armored vehicle travel the same sort of desolate landscape, but to very different ends. In this second book, there are tensions bubbling beneath the surface of the group (naturally) that culminate in a tempestuous pot of mistrust, rage, and fear as their journey presses deeper into infected territory–not to mention the killer plot twist along the way that ties both The Boy on the Bridge and The Girl With All the Gifts together. From a pure plotting and worldbuilding perspective, The Boy on the Bridge does an impressive job, particularly in its expansion of the world from the prior book (even though this book is set earlier): there are second-gen hungries (who are little monsters), the shambling remains of society, and horror aplenty along this trip.

The other area where M.R. Carey shines is with his characterization–particularly of Rina and of Stephen. As he did in The Girl with All the Gifts, Carey focuses on the love that exists between a younger character and a parental (maternal) figure. Instead of the bond between Melanie and Miss Justineau, this time it exists between Dr. Khan and the boy she singularly believes holds the key to humanity’s survival, Stephen Greaves. The narrative throughout the book shifts between several characters, but the time spent with these two in particular is the emotional core of the story–the bond between maternal teacher and precocious student is a beacon of hope at the core of The Boy on the Bridge that makes all of the sacrifices and betrayals and everything else that happens so memorable.

Hope, strong characterization, and compelling plotting aside, there is no sugar-coating the fact that The Boy on the Bridge is a tragedy. From the outset, you know that the Rosalind Franklin and her crew will bear no fruitful cure, and that everything will eventually burn. But the trick is that M.R. Carey makes you care about the slide into the long, cold darkness. If you liked The Girl With All the Gifts, if you’re a zombie enthusiast, if you like solid characterization at the end of the world and don’t mind nihilistic bleakness, what are you waiting for? The Boy on the Bridge awaits.