Title: The Warlord of the Air 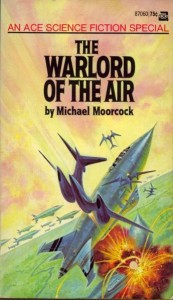 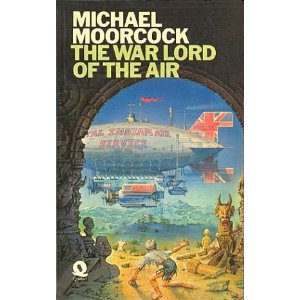 Suppose that a few of our present inventions had been made earlier, and others not discovered at all? How would the last century have evolved differently? This is the story of Oswald Bastable, a Victorian captain who found himself in such alternate worlds. It is based on notes handed down to Michael Moorcock from his great-grandfather. It’s a story of a world of empires secured by airships, and a Chinese genius who invented the means of overthrowing the West’s power!

Stand alone or series: First in the A Nomad of the Time Streams trilogy but this story is self-contained (sort of) and can be read as a stand alone.

Why did I read the book: The Warlord of the Air is generally listed as one of the seminal works which inspired the Steampunk sub-genre. In my quest to learn about all things Steampunk, I had to check it out.

How did I get the book: The book is currently out of print but is easily found on Amazon marketplace. I paid £0.01 for it (plus shipping).

The Warlord of the Air begins with an editor’s note in which the author, Michael Moorcok, tells of the discovery of a manuscript said to have been written by his own grandfather. This manuscript is the basics for the book as it follows Moorcock’s grandfather’s narrative as he describes his journey in 1903, to Rowe Island, in the Indian Ocean where he goes to recover from a nervous breakdown, away from civilization. Soon he is overcome with boredom, and Moorcock finds himself taking an interest on a young man who is kicked off a boat and seems to be in need for help with his clothes in ruins, in an obvious state of confusion and possibly addicted to opium. After taking a bath and being fed, the man presents himself as Oswald Bastable, and claims to have come from the year 1973, having just returned to 1903. Returned being the key word here as Bastable is a contemporary (or is he?) of Moorcock which was temporarily dislocated in time. His narrative, told in first person to Moocock as he writes it down is the meats and bones of The “Warlord of the Air” .

Bastable’s adventures begin in 1902 when, as a member of the British Army he is part of an expedition sent to deal with Sharan Kang, a mysterious religious figure who has been causing trouble in India. He is invited to visit the mystical temple of Teku Benga, where no westerner has set foot ever; after a confrontation with Kang’s men, he gets lost until an earthquake knocks him out. When he comes to, he finds himself alone in tattered clothes in the now completely destroyed temple. In the desolate ruins, at the top of the Himalayas, Bastable can’t find an explanation to what happened nor a way to get out. Rescue comes in the form of a huge airship – a sight he has never seen in his life. He soon discovers he has somehow ended up in 1973 – but not the 1973 that we, readers know to have happened.

In this reality, the airship he boards, is a Zepellin of the Indian Air Force, part of the British Empire. Imperialism is still very much alive, the First World War never happened and the world is largely at peace. London is clean and everybody is happy and healthy and well-off. Bastable is at first enamoured with this perfect vision and embodiment of Utopia; especially when, after joining the army once more (feigning amnesia he is able to explain how he doesn’t have an identity in this timeline) he observes that all colonies live happily under the rule of a benevolent empire.

When he is kicked out of the army (after a fight with an American called Reagan – that Reagan) , he joins another air crew who unbeknownst to him are sympathetic to the political claims that the Empire oppress the nations of the world into complacence. Bastable’s patriotism is put to test and finally crumbles down as the idea of a kind, paternalistic Empire which brings health and education to its children in the less developed colonies is turned in its head as the raging racism and oppression underneath shows their ugly faces. The consequences of uniting with the rebels – amongst them an aged Lenin who never saw the Russian Revolution take place and General O.T. Shaw, a Chinese leader who is the Warlord of the Air of the title – are catastrophic and send him right back in time and to point where the story starts.

The Warlord of the Air packs a lot of story and action in its few 150 pages or so. And as an adventurous Sci-fi romp, it is undoubtedly immensely entertaining. The idea of time travel is whole appealing to me as a reader – especially in this case, of a time traveller who doesn’t go from the future to the past but from the past to the future. Except that this future is still very much rooted in the past that he knows – the political and economical ideology of the Victorians as well as the Steam-powered technology which are still very much prevalent. The assumption is that once Imperialism takes roots, there is no further evolution.

It is as though the world is stuck in the past – part of the political, economical and sociological implications of a world that did not went through its “natural” history – proof of that is that you can’t stop history and regardless of who are the culprits, certain things will inevitably, come to happen. As cryptic as this may sound (in an effort to not spoil the ending) , that is the exact reason why the book fell short for me. For the less than subtle message towards the (rushed) ending as well as the caricaturised secondary characters who are part of it.

To sum up: the premise of the story is very cool and Bastable’s arc as someone lost not only in time but ideologically lost as well is very interesting; the ideas presented and the feeling of anti-imperialism and anti-racism expressed are ideas I wholly embrace even if those issues are simplistically handled in the end.

Now: it is Steampunk? The Warlord of the Air is actually regarded as proto-Steampunk. Published before term was even coined, I can see why the book makes most of essential lists. It has the right setting, the right technology and the right ideology. It has both the Steam and the Punk. I highly recommend it if you want to learn more about the sub-genre.

In this London there were no ugly billboards, no illuminated advertisements, no tasteless slogans and, as we climbed into the steam-brougham and began to move along one of the ramps, I realised that there were no seedy slums of the sort found in many parts of the London I had known in 1902. Poverty had been banished! Disease had been exiled! Misery must surely be unkown!

Additional Thoughts: Oswald Bastable’s adventures through time as he goes back and forth in different time streams continue for two other books The Land Leviathan and The Steel Tsar 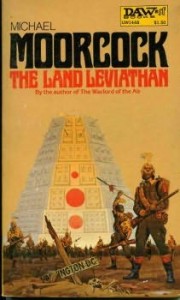 The desperation of Bastable’s bizarre fate runs deep, for an unpredictable time warp thrusts him into strange worlds, all parallel to his own, and yet different. Throughout all this, Bastable can remain steadfast in his determination to reach his own time, because of his faith in one woman, inextricably bound to him in all dimensions of Time, and his belief in the existence of a secret Utopian citadel. But there is one thing that may have the power to come between Bastable and his goal — a battle of Armageddon so horrifying in its believability that it almost obliterates his ability to keep searching. 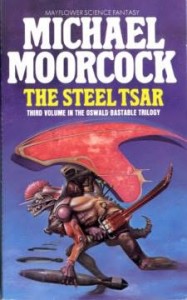 In the Russian sector of a battle-torn multiverse, Captain Oswald Bastable confronts the mythical agents of destruction and death. In his epical adventures in the alternative twentieth century, Chrononaut Bastable, member of the League of Temporal Adventurers, has crossed and re-crossed many different time-streams.. The Steel Tsar finds him travelling backwards in time from a shell-shocked Singapore to a Tsarist Empire seething with conflict, and preyed on by motley bands of rogues and adventurers. Here he meets up with fellow-time-traveller Miss Una Persson, and together they change the course of history whose mythical deeds go beyond the boundaries of everyday imagination and glitter in the exuberant land of the eternal present.

The trilogy has been collected in a one volume edition, which has finally, been given a cool cover. 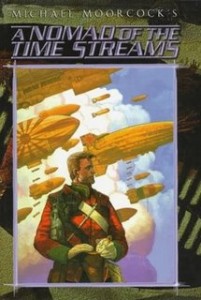 Verdict: With time travel and adventure, in a neo-Victorian setting, I highly recommend this to fans of Steampunk who would like to understand the history of the genre.

Reading Next: The League of Extraordinary Gentlemen by Alan Moore