“When they come and get you… you don’t never come back.” 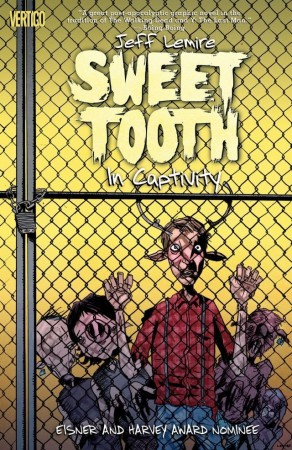 Following on the heels of THE NOBODY, his Vertigo graphic novel debut, writer/artist Jeff Lemire pens his very first ongoing series SWEET TOOTH.

A cross between Bambi and Cormac McCarthy’s The Road, SWEET TOOTH tells the story of Gus, a rare new breed of human/animal hybrid children, has been raised in isolation following an inexplicable pandemic that struck a decade earlier. Now, with the death of his father he’s left to fend for himself . . . until he meets a hulking drifter named Jepperd who promises to help him. Jepperd and Gus set out on a post-apocalyptic journey into the devastated American landscape to find ‘The Preserve’ a refuge for hybrids.

In this second volume, Lemire explores the heartbreaking story of Jepperd and how he went from a devoted husband to the ruthless mercenary he is now. Meanwhile, Gus is captured in a camp with other hybrid creatures where he meets Dr. Singh, a scientist studying the plague that’s wiped out so much of the world. By traveling more into Gus’ past, Singh will learn more about the plague, as well as clues at how some of it might relate to Gus and his father.

In Volume 1: Out of the Dark Woods, Jeff Lemire tells the story of a deer-human boy hybrid named Gus, who lives in a cabin in the woods with his father. His father is the only other person Gus has ever seen, but the two are happy and safe in the woods. Gus lives his life following his father’s teachings and honoring his rules… until, one day, his father dies. And Gus finds himself in the company of a gruff man named Jepperd, beyond the safe confines of the forest.

In Captivity follows two major story arcs: that of Gus, as he learns a little more about his world and his unique roll in it; and that of Jepperd, who reflects on his past, his choices, and the howling rage inside.

If Out of the Dark Woods was the introduction to Lemire’s strange, post-apocalyptic world, In Captivity broadens that world, and its players, immensely. In book 1, we readers only know what Gus knows: the world is full of bad people, some kind of sickness has taken over, and that sickness is somehow tied to animal-hybrid children (who are the only ones immune to the plague). Naturally, any remaining scientists would want to experiment on the immune subjects, right? In that light, In Captivity puts a whole new spin on animal testing. Basically, all of the ugly things one imagines humanity doing, humanity does – pregnant women are abducted; their babies are tagged, categorized, experimented upon; and any human-hybrid children have huge bounties placed on their furry heads.

Gus’s Arc
Poor Gus. Seriously, poor Gus! I kept thinking this while reading volumes 1 & 2, as he’s duped again and again, not just by Jepperd, but by Dr. Singh and others at the Preserve. And, to some unknown extent at this point, by his own father, who has clearly lied to the boy since his infancy. As we dive into Gus’s memories, all of this becomes painfully clear.

This is also the first time that Gus meets other children – all hybrids, like himself. There’s the pig girl Wendy, who is as clever as Gus (though younger, and her hybridity is more pronounced than Gus); there’s the groundhog named Bobby, who can speak only in stunted grammar and basic sentences; there’s the silent Buddy.

All we know of these children is that they have no homes, and little hope, despite Gus’s optimism. As Wendy tells Gus, once they come for you, you don’t ever come back.

It’s hard not to ache for these characters, and want them to survive and succeed and escape this horrible place…

But what’s so fascinating about In Captivity is that while there certainly are Bad People – the militia, for example, is shudder-inducing – there are characters who are nuanced, layered creatures with shades of gray. Take, for example, Dr. Singh, who is bone-weary and dedicated to finding a cure for the disease that will claim all of humanity.

Jepperd’s Arc
At the end of Out of the Dark Woods, I despised Jepperd – even though you know he will betray Gus, it doesn’t make the betrayal any more palatable.

But in In Captivity, we learn why he betrays Gus. We see who Jepperd was, what he sacrificed, and how he has become the man he has become. 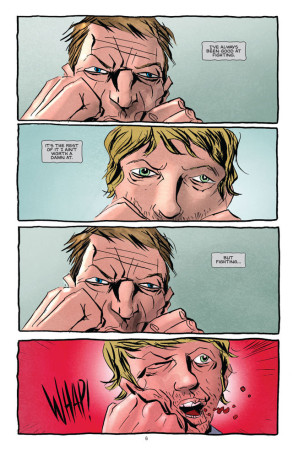 I don’t want to spoil it, but I found his arc incredibly moving. We learn about his wife, their unlikely match, and how much he loved her. We also witness Jepperd’s mental collapse – his fragmented memories, his repetition in words, eerily (and beautifully) reflected in Lemire’s mirroring artwork.

And by the end of In Captivity, we see Jepperd come to a conclusion and revelation of his own… which can only mean trouble for the folks at The Preserve.

I cannot wait to see what happens next – and what it means for the straggling survivors in Gus and Jepperd’s broken world.