Genre: YA (all vampire stories)

Stand alone or series: both. Some stories are stand alone some are part of series.

Summary: There’s an allure to vampire tales that have seduced readers for generations. From Bram Stoker to Stephanie Meyer and beyond, vampire stories are here to stay. For those fresh-blooded fans of paranormal romance or for those whose hunt and hunger never dies, these stories have what readers want! This collection of original tales comes from some of the hottest, most popular, and best-selling YA writers.

Why did I read the book: FULL DISCLOSURE – I don’t usually read anthologies but I just had to read this one mainly for two reasons: my friend Karen Mahoney has a story in it (hooray!) and I was very happy and proud about it! And because of Sarah Rees Brennan ‘s story –she is now an instant-buy for me.

The Eternal Kiss is a new anthology for Young Adults with 13, vampire-themed short stories. In all honesty, usually I find that anthologies have one or two stories that are REALLY good and the remaining ones, mediocre at best (unless we are talking about Neil Gaiman and the book Smoke and Mirrors, but I digress). To my surprise, I found The Eternal Kiss to be a really well-balanced collection of stories and I ended up enjoying all of them (although some more than others, of course). It also worked really well for me as a taster for I had never read any book by most of these writers before. I particularly enjoyed Maria Snyder, Rachel Caine and Kelley Armstrong’s writing – Thea has been raving about these writers for some time now and I am yet to pick up their books. Their stories here gave me the final push, definitely.

Another aspect that is relevant to mention is how diverse these stories are: some of them are self-contained, others are clearly connected to other stories by the authors or the beginning of a larger tale. There is also a great variety in the way the vampires are approached (good vampires, bad vampires, romantic vampires, etc) and with regards to the genre of each story: there is Comedy, Romance, a lot of Horror and Urban Fantasy.

Now, for the stories themselves in the order they appear in the anthology :

Falling to Ash by Karen Mahoney – a Vampire called Moth reunites with her sire (whom she may or may not love) and he tasks her to get the ashes of a staked vampire kept by the vampire hunter who killed him. He meets with the hunter’s son and they have a stand-off. I really liked Moth and her attitude – how can you not love a young(ish) vampire girl named Moth. Really? – and there are a couple of cool fighting sequences and an interesting spin on vampire lore. This is clearly an open-ended story and the author has been working on Moth’s story.

Shelter Island by Melissa de la Cruz – a 15 year old girl who lives in a mysterious holiday place – Shelter Island – and one night is visited by a vampire boy who is terrified of someone out there. This is a very short story and although I liked the writing well enough and the idea behind the story , this was also the one tale that frustrated me the most. Note to Young Adults out there: if you find that there is a vampire living inside your closet you run for help, you scream for your parents, you pick up a lamp and throw at him, you FREAK OUT. You do not, I repeat, do not, keep it a secret and then offer your neck as a sustenance. Just saying.

Sword Point by Maria V. Snyder – Ava is a very driven teenage girl who loves fencing and wishes to make the Olympics. She starts training at the Academy of the Sword and then meets a guy named Jarrett who is a martial arts instructor and who ends up introducing Ava to the supernatural world. This is one of the stories where vampires =BAD. I was surprised at how in such a short amount of pages, Maria Snyder was able to convey a lot about Ava and I really liked this character and her voice.

The Coldest Girl in Coldtown by Holly Black – Ah. Easily one of the best stories in the book – another one where vampires are not really GOOD. A young girl tries to fight becoming a vampire after she is bitten. If she manages not to drink blood for a number of days, the venom is expelled – she does that by being constantly drunk. But it is hard and even harder when she finds out that a friend and the guy she loves have gone to Coldtown, where the vampires live. This is a pretty atmospheric and horrific self-contained tale. I loved it.

Undead is Very Hot Right Now by Sarah Brennan – Hands down my favourite story in the anthology and worth the purchase just for this one. I have read Sarah Rees Brennan’s book The Demon’s Lexicon (recently released) and found that I really like her brand of sarcastic humour, something that is really evident in this short story. Basically, a young vampire joins a boy band and hilarity ensues as he tries to fit in this new world. Do you know how in each boy band, there is always one that is the “hot” one, or the “cool” one? Christian is the “gimmick” and every single cliché about boy bands and vampires are explored here to maximum laugh out loud factor.

Kat by Kelley Armstrong – I thought this to be a very interesting story as Kat and her vampire guardian flee some unknown pursuers. Kat is the result of a genetic experiment and she knows that she is a paranormal being of some sort (she wishes she could be a were-cat) but so far there is no evidence of WHAT she is. I like the dynamics between Kat and her foster mother and the fighting scenes were cool too. It reads like the beginning of a new series.

The Thirteenth Step by Libba Bray – Another one of the more “horrific” variety in which a girl finds a job at a House for recovering addicts. She is driven there because of her own, unhappy family story with drugs and her need to do something. Unfortunately things are not what it seems and there is a thirteenth step that all must go through. There is a bit of romance to counterbalance the horror of a self-contained story.

All Hallows by Rachel Caine – This is the only story that is part of a larger series, The Morganville Vampires series. I have not read any of them but I was not lost when I read All Hollows. It did make me wonder about the overall story arc though – seems pretty interesting. Eve Rosser dates a vampire and then he goes missing and together with some friends (including a hunter) she goes after him.

Wet Teeth by Cecil Castellucci – I loved the opening sentence of this one, with a vampire musing about how pieces of skin always remain on his teeth after he bites someone. It is a very appropriate opening to a creepy story – it sets the mood just fine. Another horror story and a sad one at that. Boy meets girl and there is no happily ever after.

Other Boys by Cassandra Clare- there is a new guy in school and he says he is a vampire – attracting the girl who is the main character. Things are not what they seem though and there is a twist. This one is another horror story and even though it wasn’t bad, it didn’t rock my world either.

Passing by Nancy Holder and Debbie Viguié – Now, this one has an interesting premise. In a post Vampire -apocalypse world, a group of students go to the Academia, in Spain (love the setting) to learn how to become hunters. There is a lot of background that was left out but the story is interesting enough and I wouldn’t mind reading more about it. Here is hoping for a series.

Ambition by Lili St. Crow – I think this is the darkest of the stories in the anthology, one that has an ending open for interpretation and no matter how much I think of it, I only come up with this terrifying feeling. This is a story of bullies and high school separation of class – and also about a girl who ends up being seduced (and dazed) by the dark side. I sort of liked it, in a totally creepy kind of way. Reminded me of Heathers.

All Wounds by Dina James – another one that seems to be the beginning of a new series with a girl struggling to make do with going to school and taking care of her grandmother who seems to be losing her mind. Then, she discovers that there is more to her family than she thought and that things like vampires and hellhounds are very much real. And …there is a set up for a Love Triangle of Doom and god damn me, I liked both guys.

And check out the Australian cover: 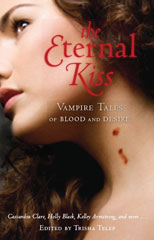 Which one do you prefer?

Additional Thoughts: Karen Mahoney will be here later today guest blogging about writing for Young Adults and you will have a chance to win a signed copy of The Eternal Kiss.

Verdict: overall, a pretty good collection of short stories. Horror seems to be the main genre though, so if you are looking for HEA and Romance you won’t find it in here.

Reading Next: Prophecy of the Sisters by Michelle Zink

Over at Kirkus: Throne of the Crescent Moon by Saladin Ahmed.