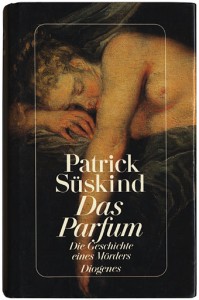 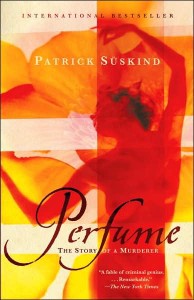 Why did I read this book: Ana and I decided that we had gone too long without a Dare, so we cracked down. Ana picked Perfume: The Story of a Murderer for me, a literary fiction novel about a man born with a superhuman sense of smell. I read the blurb, and though I was a little scared (“realistic” literary fiction can do that to me!), I was also very excited to give Mr. Suskind’s international bestseller a try…

Summary: (from amazon.com)
An acclaimed bestseller and international sensation, Patrick Suskind’s classic novel provokes a terrifying examination of what happens when one man’s indulgence in his greatest passion—his sense of smell—leads to murder.

In the slums of eighteenth-century France, the infant Jean-Baptiste Grenouille is born with one sublime gift-an absolute sense of smell. As a boy, he lives to decipher the odors of Paris, and apprentices himself to a prominent perfumer who teaches him the ancient art of mixing precious oils and herbs. But Grenouille’s genius is such that he is not satisfied to stop there, and he becomes obsessed with capturing the smells of objects such as brass doorknobs and frest-cut wood. Then one day he catches a hint of a scent that will drive him on an ever-more-terrifying quest to create the “ultimate perfume”—the scent of a beautiful young virgin. Told with dazzling narrative brillance, Perfume is a hauntingly powerful tale of murder and sensual depravity.

It is the dawning of the Age of Enlightenment in France, of coffeehouses and of reason struggling triumphant over religion. It also is a time when the streets ran rank with the odors of sewage, unwashed people, spoiling food and decaying corpses. In the most odiferous of Paris’s slums, in the heat and stench of the poorest fish market, a woman gives birth and tries to leave her child for dead beneath her spoiling wares. But, determined to live even as a babe, the newborn emits a shriek that alerts others to his existence. His mother is killed for her attempted infanticide, and the young boy is passed from wet nurse to priest to orphanage, and he discovers his true purpose and calling – scent.

Perfume is the story of Jean-Baptiste Grenouille, a proclaimed monster, a savant of the olfactory, and a murderer. It is not so much a story about his murders (as the full title, Perfume: The Story of a Murderer, suggests), but about Grenouille’s life. From Grenouille’s hasty birth to his ultimate demise, this is the story of a growing monster, who knows the unparalleled power of scent. From orphan to tanning apprentice to perfumer, Grenouille realizes that scent can influence and change perceptions, and that every odor has its purpose. And, when he realizes that he himself has absolutely no smell at all, he begins his careful work to craft the ultimate scent – the scent of love.

I didn’t know what really to expect with Perfume – though I suppose I thought I was in store for more of a grisly murder tale. In actuality, Perfume is a character’s journey, and a scathing commentary on human nature. Yes, Grenouille’s murderous acts are portrayed in the book, but they are not gratuitous or gory – rather, this is an atmospheric, macabre tale. Far more terrifying than the corpses Grenouille leaves behind are his perceptions, his desires and ambitions. As a character, we know from the first sentence that Grenouille is a monster:

In eighteenth-century France there lived a man who was one of the most gifted and abominable personages in an era that knew no lack of gifted and abominable personages. His name was Jean-Baptiste Grenouille, and if his name — in contrast to the names of other gifted abominations, de Sade’s, for instance, or Saint-Just’s, Fouche’s, Bonaparte’s, etc — has been forgotten today, it is certainly not because Grenouille fell short of those more famous blackguards when it came to arrogance, misanthropy, immorality, or, more succinctly, to wickedness…

Just as from his birth, as a child without any scent at all, Grenouille never really had a chance for redemption with readers either. He’s a magician, an outcast, a recluse. But even more terrifying than Grenouille, in my opinion, were the malleable, ignorant humans around him, reacting to the scents he ultimately concocts. Mr. Suskind’s debut novel carefully constructs self-absorbed characters, all flawed monsters in their own way. And perhaps that’s the most terrifying thing of all – for as driven as Grenouille is to concoct his masterpiece, each other character he interacts with from the Orphange mam Madame Gaillard to the bereaved father Monsieur Richis are revealed for the selfish creatures they truly are.

Beyond the characters and insight to the selfish cruelty of the human disposition, however, Perfume simply is a beautiful book. The detailed background of French history that Mr. Suskind paints his novel against is incredible. The plotting, though slow at times and ultimately not a grand or sweeping epic, is strong in its own right. And the prose…ah, the prose! It is simple, sparing, and luscious. Mr. Woods, the translator, did a phenomenal job of interpreting the German to English, as this is one of the finest translations I can remember reading (comparable to Lucia Graves’ The Shadow of the Wind). I would never have picked up this novel had I not been dared by Ana – but I absolutely loved it. Perfume is an unforgettable bouquet indeed.

Notable Quotes/Parts: From the second chapter:

“Ah, I understand,” said Terrier, almost relieved. “I catch your drift. Once again, it’s a matter of money.”

“Of course it is! It’s always a matter of money. When there’s a knock at this gate, it’s a matter of money. Just once I’d like to open it and find someone standing there for whom it was a matter of something else. Someone, for instance, with some little show of thoughtfulness. Fruit, perhaps, or a few nuts. After all, in autumn there are lots of things someone could come by with. Flowers maybe. Or if only someone would simply come and say a friendly word. ‘God bless you, Father Terrier, I wish you a good day!’ But I’ll probably never live to see it happen. If it isn’t a beggar, it’s a merchant, and if it isn’t a merchant, it’s a tradesman, and if it isn’t alms he wants, then he presents me with a bill. I can’t even go out into the street anymore. When I go out on the street, I can’t take three steps before I’m hedged in by folks wanting money!”

“But I’ll tell you this: you aren’t the only wet nurse in the parish. There are hundreds of excellent foster mothers who would scramble for the chance of putting this charming babe to their breast for three francs a week, or to supply him with pap or juices or whatever nourishment . . .”

“Then give him to one of them!”

“. . . On the other hand, it’s not good to pass a child around like that. Who knows if he would flourish as well on someone else’s milk as on yours. He’s used to the smell of your breast, as you surely know, and to the beat of your heart.”

And once again he inhaled deeply of the warm vapors streaming from the wet nurse.

But then, noticing that his words had made no impression on her, he said, “Now take the child home with you! I’ll speak to the prior about all this. I shall suggest to him that in the future you be given four francs a week.”

“How much more do you want, then?” Terrier shouted at her. “Five francs is a pile of money for the menial task of feeding a baby.”

I don’t want any money, period,” said the wet nurse. “I want this bastard out of my house.”

“But why, my good woman?” said Terrier, poking his finger in the basket again. “He really is an adorable child. He’s rosy pink, he doesn’t cry, and he’s been baptized.”

“He’s possessed by the devil.”

You can read the full excerpt of the first two chapters HERE.

Additional Thoughts: This book, which went on to become an international bestseller, was recently made into a motion picture: 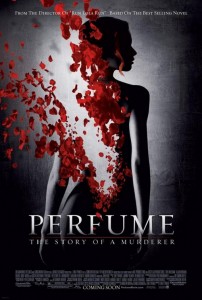 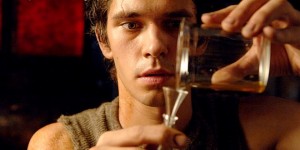 Starring Ben Whishaw as Grenouille, Dustin Hoffman as Baldini, Rachel Hurd-Wood as Laure (changed to “Laura” for the film), and Alan Rickman as her father Richis. I haven’t yet seen the film, though I will certainly be renting it very soon! I am kind of wary though – the book’s strengths are in the internal descriptions and interpretations of Grenouille and his scents, and I’m not sure how well that will translate to the big screen… 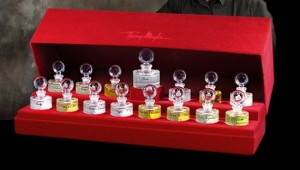 Also in random, very creative and somewhat disturbing news, in conjunction with the film, perfumer Thierry Mugler has interpreted the scents from the book and movie Perfume. The collection, which costs $700 total, contains scents such as Jasmine and Sea, but also contains “Virgin No. 1,” “Baby,” and “Human Existence” among others with explanations. For example:

INSPIRATION
“It was a mixture of human and animal smells, of water and stone and ashes and leather, of soap and fresh-baked bread (…). Thousands upon thousands of odors formed as invisible gruel that filled the street ravines, only seldom evaporating above the rooftops and never from the ground below. ”
~ From Part I, Chapter 7

INTERPRETATION
“So real!  As if you were there! With ‘Human Existence’, it corresponds to the horror movie of perfumery.  It requires as many skills and special effects. Controversial ingredients were specifically used to come up with this one-of-a-kind olfactory conglomerate. The ambivalence of the cassis note, cleverly used, for example, makes a definite impression. Blackcurrants in fruity compositions have a slight odor of urine, however, when they are added to a dark scent, their fruity accord clearly dominates. The challenge was to hide the fruity aspect and to place the emphasis on the sordid effect.”

Verdict: Almost against my will, I loved Perfume. This is a delectable novel, beautifully written and devastatingly dark. Absolutely recommended to anyone that loves a well-written novel.

Reading Next: Ark by Stephen Baxter