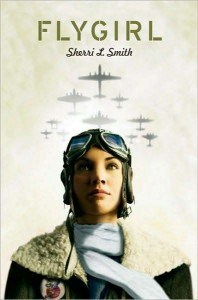 Ida Mae Jones dreams of flight. Her daddy was a pilot and being black didn’t stop him from fulfilling his dreams. But her daddy’s gone now, and being a woman, and being black, are two strikes against her.

When America enters the war with Germany and Japan, the Army creates the WASP, the Women’s Airforce Service Pilots—and Ida suddenly sees a way to fly as well as do something significant to help her brother stationed in the Pacific. But even the WASP won’t accept her as a black woman, forcing Ida Mae to make a difficult choice of “passing,” of pretending to be white to be accepted into the program. Hiding one’s racial heritage, denying one’s family, denying one’s self is a heavy burden. And while Ida Mae chases her dream, she must also decide who it is she really wants to be.

Why did I read this book: I wanted to read more about the women who were part of the war effort during World War II back home. This one had great reviews too.

A few weeks ago I watched this amazing BBC4 documentary entitled Spitfire Women about women who wanted to be a more effective part of the War effort in England during World War II and became part of the Air Transport Auxiliary (since joining the Army to fight was not an option) by flying aircrafts (including the infamous Spitfire) to the frontline RAF. The documentary features original footage as well as interviews with the now octogenarian (or maybe even older) ladies and it was so amazing to see these women who dared to try and do more at a time where their gender prevented them from doing whatever it is that they wanted. But what really left a long lasting impression, more than their fight against sexism, although that was an important and interesting aspect of the story, was their absolute love and passion for flying which makes the fact that some of them never got to fly again after the War was over even more heartbreaking.

I finished watching it feeling bereft and wanting MORE of stories like this, and then I remembered reading about a YA book called Flygirl and I wondered if it had anything to do with this part of history. I searched for it almost immediately and found out that yes, it does, although it deals with their American counterparts.

Flygirl is about Ida Mae Jones, a young black woman who wants nothing but to fly. She learned how with her late father who owned a small plane – now kept in a barn at their farm – which they used for crop dusting. The book opens when Ida Mae is only 18, recently graduated from high school, working as a cleaner along with her best friend Jolene for the white folks in her town, to save money to go to Chicago to get her pilot license; Ida Mae is a great pilot and she knows it but the license is something that has been denied to her – at least locally, in Tuskegee – not because she was black but because she was a woman. Before she can save enough money to go away, the US enter the war after the attack to Pearl Harbor and her dreams are put on hold after her oldest brother enlists and asks her to take care of their family: her mother, grandfather and younger brother. A few months later, she learns about the Women’s Airforce Service Pilots (WASP) program which trains young women to fly military aircrafts across America in order to free up men to fight in the front. Ida Mae wants to join not only because she wants to fly but also to do something more effective than rationing food to help with the war effort and perhaps help bringing her older brother back home.

But this time, if her gender is not a hurdle, her race is and Ida Mae makes a tough decision after witnessing a black woman being denied access to the program. Having gone thus far, having forged a pilot’s license using her father’s old one, Ida Mae decides to still try and the person who interviews her assumes she is white since her skin is light enough and Ida Mae doesn’t tell the truth and just like that she is in.

She leaves her family behind and her arduous training begins in Sweetwater, Texas where she will make friends and do what she set out to do. But it is not an easy task since she will face the consequences of her choice of “passing” but also all the sexism that comes from trying to be more than what is expected from someone of her gender at the time.

I loved this book. I loved this book. It was everything I hoped it would be, given my above stated reasons for reading it in the first place. I loved Ida Mae, her voice and loved to read her story. I don’t often say things like this when I am referring to a book, but I thought the story was inspiring when it comes to the gender issues. It was great to read about the WASP program, and about the girls who were part of it (some of them real characters, some of them fictionalised) . Ida Mae was a strong character, who believes in her ability to be a kick-ass pilot and I rooted for her and her friends to prove that they could do it. In a sometimes hostile environment, that a lot of the times used these girls to test planes that aren’t fit to fly because “if a girl can do it, so can a man”, surviving and proving oneself is no easy task. Every time the girls succeeded, I rejoiced. I do have to say that I thought the book was a little bit too clean and free of conflict: for example, I expected to see or hear about sexual harassment. I am pretty sure it must have happened at some point? But this crossed my mind only after I finished reading it.

Flygirl is a book not only about a woman wanting to be a pilot but also about a black woman “passing” as white. And although the plotlines have a stronger focus on gender rather than on race, I feel that the latter was well done and addressed in a manner that was sufficient to me. I think that for example, Ida Mae was extremely naive to start with, believing that “passing” would be easy, that it wouldn’t change her, and that she would still, fundamentally be Ida Mae. I loved how her mother and grandfather knew from the start that her choice would be nothing but easy, that pretending to be something other would affect her and her relationships at the very least. And I don’t think that the author shied away from it. Some of the criticism that the book received is that there was no repercussion for Ida Mae “passing” as white. But in my understanding, that makes a lot of sense because isn’t “passing” exactly this: a person has “passed” and if they are careful no one will ever know? It is superficial of course, and it works only for outsiders ad thus all the conflict has to be on an individual, internal basis. And in this book, this decision is never, ever far away from Ida Mae’s mind and behaviour: in the why she is always worried that her hair will give her away; or how she will never sunbathe because she is afraid her skin will go darker; how she feels every time she meets someone white and her first reaction it to always address them in a subservient manner; or how she nearly panics every time she walks into a “whites only” establishment; how she falls in love with a white man but doesn’t dare to do anything because she knows she is deceiving him; the guilt she feels for lying to her friends and above all, the immense, horrendous gap this builds between those she loves – Jolene and her family – and herself. All the scenes between Ida Mae and her mama nearly broke my heart and one in particular made me sob.

It is well worth pointing out though that there are dissenting views about this. One of my favourite, most thoughtful reviews of this book comes from Zetta Elliott who believes that the book did not address the racial issues in depth and I highly recommend those who have read or will read the book to read it.

And this is a bit spoilery and I am sorry to bring it up but I feel I must: Flygirl has an open ending and we never know what happens to Ida Mae after the war is over and how all the issues of guilt, broken relationships, and love story are resolved (or not). This probably frustrates many readers but I liked it. It probably allows a more flexible imagined ending than Real Life would allow her as a black woman in the 40s and I’d like to think that for someone like Ida Mae perhaps the sky was not the limit….

“Just listen to me. Listen to me!” I all but shout and mama stops in her tracks. I’ve never raised my vouce to her and gotten away with it. But I’m not a little girl anymore.
“Somebody has got to do something. So I went. I put my name on Daddy’s license and I went and got an interview. And you know what? I wasn’t hiding anything when I went into that room and sat face-to-face with an actual woman Army Air Forces pilot. And do you know what she saw? Not a Negro woman, not a white woman, not a high yellow. But a pilot, mama. A good pilot that they need. Don’t you see? This is what daddy used to fly for. The chance to be everything other than the color of his skin.”

Additional Thoughts: If you have any interest in hearing more about these incredible women I HIGHLY recommend you watch the BBC4 documentary, Spitfire Women. 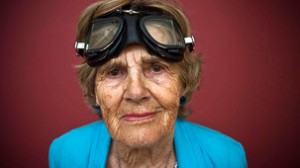 Would you have any recommendations – TV, book, movies?

Reading next: Please Ignore Vera Dietz by A. S. King

Joint Review: The Girl with the Mermaid Hair by Delia Ephron

Over at Kirkus: Reefsong by Carol Severance