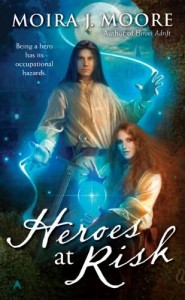 Stand alone or series: Book 4 in the ongoing Hero series.

Why did I read this book: I discovered Ms. Moore’s Hero books about two years ago, on a whim. I saw the cover of Resenting the Hero in my local store, and thinking it was a lighthearted young adult novel I scooped it up. And upon reading it, I learned that it decidedly was not YA, and was freaking hilarious – not to mention engaging. I was hooked, immediately running out to buy The Hero Strikes Back. Needless to say, the adventures of Sheild Dunleavy Mallorough and her Source, Shintaro Karish are of a compelling, entirely charming and unputdownable nature. Last year when Heroes Adrift came out, I read it in a single sitting and loved it. So, when I unexpectedly received a copy of Heroes at Risk on my doorstep, I was ecstatic!

Summary: (from Penguin.com)
Shield Lee Mallorough and her Source Shintaro Karish have returned to High Scape. It’s bad enough the townspeople are robbing tombs for ashes to use in ritualistic magic. It gets worse when they start to murder the living for their remains.

After their hijinks in the Southern Isles on a mission to find a royal heir for the ailing Empress, Shield Lee and her Source Taro have finally returned to High Scape. Though they were unsuccessful in finding a “suitable” heir for the Empress, their journey has changed Lee and Taro’s relationship forever as they are united as lovers for the first time. But, upon returning home, Lee knows that things cannot be so blissful forever. For one, the other Pairs in the city will doubtless frown upon their intimate relationship and will cause the two of them to be the source of censure (as Pairs are never supposed to hook up because of their delicate and life-long connection). And more importantly, Lee knows that the charismatic, beautiful, rakish Taro will someday tire of the plain Lee. Away from the island of Flatwell, and no longer “Leavy the Flame Dancer,” Lee knows that her days of happiness are numbered – and so to lessen the inevitable blow of Taro’s disregard, she chooses to be pragmatic and if not pessimistic, at least realistic about her situation. Of course, this causes tension between her and Taro as they try to come to terms with the parameters of their relationship – especially when Taro’s friends are in the picture, and Lee’s old flame, Doran makes a return to the scene.

And, naturally, Lee and Taro have much larger matters to worry about than their awkward love life. Things have changed in High Scape since they’ve been gone – spell casting has become widespread as the populace looks to protect themselves from a mysterious illness that affects those living on the riverfront, and merchants selling “magical” objects of questionable origin start to profiteer on the frightened public. Then, there are also the disturbing accounts of grave robberies occuring in the city, where human remains are unearthed and stolen for good luck…

Though the weather events have settled down significantly in High Scape rendering it almost a cold zone, Lee and Taro have their work cut out for them.

Heroes at Risk is Moira J. Moore at her best – departing from the strange setting of the Southern Island of Flatwell, Lee and Taro return to the bustling center of High Scape, but they are undeniably changed, and in the words of Thomas Wolfe, they cannot go home again. Lee and Taro, as a tentative new coulple unsure of themselves and their own status together, return to a world that has similarly changed. The strength of Heroes at Risk, for me as a huge fan of the series, is how Ms. Moore departs from the rut of sameness. Instead of rebooting her characters, ignoring what has happened on their journey together, she forces them to confront the new awkwardness that their intimacy has bred. And, the result of this forced intimacy and awkwardness in the face of other Pairs is absofreakinglutely brilliant. Cringeworthy, embarrasing, heart-bruisingly brilliant. As per usual, Hereos at Risk is narrated in the first person by Shield Lee – and as such, the narration has her own biases and slant. Lee is the epitome of the “unreliable narrator” – many times she doesn’t see what is right in front of her face (especially when it comes to Taro), but that’s what makes her so endearing a heroine. Lee, above all else, prides herself on her strengths as a Shield. Shields are immovable – they are solid, they are austere, they are pragmatic. But, after she and Taro took their relationship to the next level, as it were, she has been thrown in a bit of a tizzy. Lee’s struggles to tell herself that she doesn’t need Taro and that their relationship will inevitably end when he inevitably tires of her drives many of her motivations in this book – and it’s a touching and slightly sad (and more than a little infuriating) thing to read. She’s so convinced that their relationship will fail – and soon – that she tries to protect herself with indifference. Of course, that’s what she tells herself, but we readers know this is all hogwash.

I loved how vulnerable Lee was in this instalment – both physically and emotionally. As Angie of Angieville mentions in her review, Lee is simply NOT a vulnerable person. She’s strong; she’s a Shield. She takes her duties towards protecting her Source at all costs very seriously, to the point where she cooly and calmly refuses to show emotion, no matter what. And, in Heroes at Risk, Lee opens up in a way that is unparalleled in the earlier novels. Part of that might be because of her new relationship with Taro, but a lot of it also comes from the growing she did as person on Flatwell. Taro too is at his trademark best, lovable and charming with his good looks and Source charisma, but he’s also mercurial and childish and a tad jealous at times, but for all his mood swings, I can’t help but love Taro as Lee does. He’s so…Taro. Also, Taro’s got more of an edge to him since their journey to Flatwell (aka “that damn island”). For once, he has learned what it feels like to be underpowered and marginalized, and it’s not a lesson he takes lightly or easily forgets – in fact, a lot of his motivations as a character are reflections from their time together, away from the Triple S and High Scape.

And again, this is the beautiful part of Ms. Moore’s series – both Taro and Lee are not static creatures preserved in amber. Rather, they change and grow and have messy emotions and tussles along the way. Lee and Taro’s relationship grows dramatically in this book, and it’s truly a wonder to read. As a reader, I alternated between delighted, furious, frustrated and awestruck with the burgeoning connection between these two very different characters.

On top of the relationship drama between the two, there’s also the overarching mystery – the sicknesses by the river, the stolen ashes, and Lee and Taro’s vulnerability as one of only a few Pairs left to defend the city. While I can’t say the mystery aspect was extremely challenging or engaging (as it was painfully clear who at least one of the major villains was early in the novel), by the end of Heroes at Risk Ms. Moore manages to weave some very interesting plot threads into the overall story, leaving tantalizing repurcussions for the next book. In particular, the last three chapters pack a heck of a twist that should prove very interesting in the future.

Once again, Ms. Moore manages to delight, to enthrall and more importantly, to build on the lovable, compelling characters she has created in this series. Heroes at Risk is a fun novel, and even better than the last in the series. If you haven’t read these books yet, you really should remedy this deficiency in your reading diet. Highly entertaining, and highly recommended!

Notable Quotes/Parts: One of many showdowns between Lee and Taro:

“Jek saw you at the Loft. He said you were a complete wreck.”

“I was not.” My manners had been perfectly correct. And Jek could mind his own damned business.

“Tell me the truth!” he practically shouted.

I blinked in shock. What had just happened? “Excuse me?”

“You’ve been trying to hide how ill you’ve been,” he accused me.

“I have not. I’m not going to complain every time I get a headache. You’d find that pretty tiresome after a while.”

“I did not.” I took a deep breath and continued in my most soothing tone. “For some reason, today I felt particularly bad. But this has been the first time I’ve felt light-headed. And I’m here now, and they’ll –”

“It never should have gotten this far. You should have told me what was going on immediately. Why are you always hiding things from me?”

“I’m not hiding things from you,” I said in my most soothing tone. “Please calm down.”

“Stop pretending you’re the rational one!” he shouted.

I stared at him. What was going on with him?

“Why are you doing this?” he demanded.

“What games?” Why did he have to pick this moment to go crazy?

Oh, and there went the hands, right into the hair. “What games?” he bellowed. “You’re making time with Laidley. And you dont’ want to go about town with me, and you won’t let me go out with you.”

Why in the world was he dragging all this up again?

I wasn’t making time with Doran. I hadn’t even seen him since our picnic, which Taro knew all about. “I haven’t been with Doran that you haven’t known about it.” And I resented having to to tell him that. “What is wrong with you?”

“On Flatwell and the whole trip back here you were all over me.”

I wouldn’t have described myself that way.

“And then we’re back in High Scape, and suddenly it’s a whole new set of rules. And you’re the only one who gets to decide what the rules are.”

Rules? There were no rules. Certainly none that I had made up.

For those who have not yet read the series, it is currently four novels strong, and ongoing. In order, the books are: Resenting the Hero, The Hero Strikes Back, Heroes Adrift, and Heroes at Risk. And, a bit on the covers – the first two books seem to have used a different artist, or at least a different concept for the look of the series: 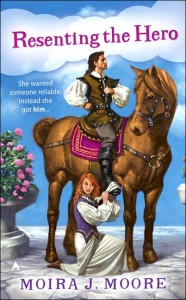 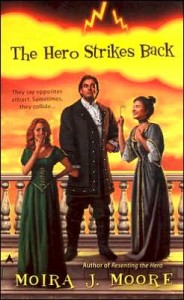 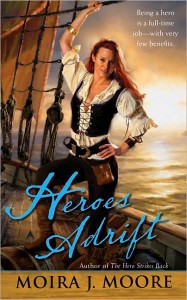 I really am not a fan of this most recent cover (Taro looks like a brunette Fabio Legolas. It’s not attractive.), though I did like the nautical feel for Heroes Adrift. I kinda miss the comedic feel for the first two covers…hopefully a happy medium can be reached for book 5!

Reading Next: Rosemary and Rue by Seanan McGuire