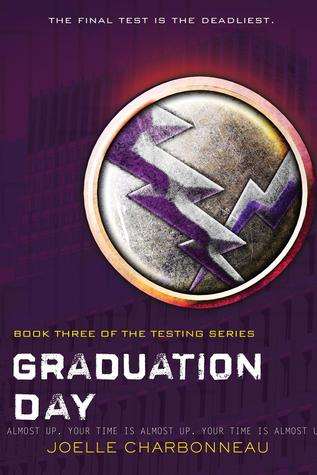 In book three of the Testing series, the United Commonwealth wants to eliminate the rebel alliance fighting to destroy The Testing for good. Cia is ready to lead the charge, but will her lethal classmates follow her into battle?

She wants to put an end to the Testing
In a scarred and brutal future, The United Commonwealth teeters on the brink of all-out civil war. The rebel resistance plots against a government that rules with cruelty and cunning. Gifted student and Testing survivor, Cia Vale, vows to fight.

But she can’t do it alone.
This is the chance to lead that Cia has trained for – but who will follow? Plunging through layers of danger and deception, Cia must risk the lives of those she loves–and gamble on the loyalty of her lethal classmates.

Who can Cia trust?
The stakes are higher than ever-lives of promise cut short or fulfilled; a future ruled by fear or hope–in the electrifying conclusion to Joelle Charbonneau’s epic Testing trilogy. Ready or not…it’s Graduation Day.

The Final Test is the Deadliest!

Stand alone or series: Book 3 in the Testing trilogy

Why did I read this book: Despite the fact that the entire Testing trilogy is entirely derivative of other popular YA dystopian novels out there (from The Hunger Games through Divergent), I have thoroughly enjoyed the ride. Both The Testing and Independent Study are so much fun that I devoured them each in single sittings; naturally, I was very excited for the release of the third and final book in the series, Graduation Day.

**WARNING: This review contains unavoidable spoilers for the first two books in this trilogy. If you haven’t read The Testing and Independent Study and wish to remain unspoiled, look away.**

Sixteen-year-old Malencia “Cia” Vale has survived the life-or-death Testing in order to gain entry to the Commonwealth’s sole university. Although her memories were supposed to be completely suppressed, wiped away, following her acceptance to University classes, thanks to her ingenuity with technology Cia has been aware her entire time in school. She knows that her professors and the government – especially Testing overseers Dr. Barnes and his cohorts – are not to be trusted. Most of all, she knows that failure in her classes means certain death.

After getting placed in the competitive and prestigious government studies track at University, Cia has managed to secure an internship working for President Collindar. And, much to Cia’s surprise, Collindar turns out to be against the Testing and a powerful ally. Cia has also discovered that it’s not just the President who questions the efficacy of the Testing – there are those who will stand against it, who are plotting a far-reaching rebellion to bring the system down. In a devastating double-cross, however, Cia learns that the rebellion leaders are actually puppets of the nefarious Dr. Barnes, and that the real purpose of the movement is to crush any uprising swiftly and completely – taking out the more moderate-minded President Collindar at the same time.

But Cia has a plan of her own: to stop the false rebellion, to save her colony from death, to end the Testing once and for all. It will take all of Cia’s smarts, guts and resolve to pull it off – but with the help of a few friends (even those of questionable loyalties), Cia plans to change the future.

The third and final novel in Joelle Charbonneau’s dystopian YA trilogy, Graduation Day is a fitting, action-packed finish to a wholly entertaining series. I don’t dole out this praise lightly; I’ve had a bit of bad luck lately with recent closing or continuing novels in series’ I’ve enjoyed in the past. Ending on a high note is never an easy feat, and while Graduation Day isn’t without its issues (and while it is probably my least favorite book in the trilogy), it at least is consistent with the first two books and closes things in a logical, satisfying way.

A large part of the finale’s success is owed to the worldbuilding accomplished in this novel, building upon the framework established in the prior books. There is a plausibility problem inherent in the Testing Series as a whole on a very fundamental level: namely, how does no one realize that children are just disappearing willy-nilly under the guise of being “relocated” without so much as ever dropping a line of communication? For the children of the Colonies, the disappearance and lack of communication between families and their Tested children is perhaps a little easier to swallow, but the process continues even throughout University with children of powerful, well-connected families subject to the same life-or-death rules. In Graduation Day, this plausibility gap is thankfully explained somewhat, as is the background of the Testing process and its place in the governing of the Commonwealth. In a country torn by rebellion and devastating environmental fallout, the Testing process emerged as a stopgap measure to prevent rebellion and to gauge the efficacy of future leaders. Surprisingly, the ending of this book – intrinsically tied to this premise of killing off/relocating promising young minds – is a moderate solution. No one is singularly good or evil, not even the villainous Dr. Barnes. I like that there is this tension, this question of the greater good that Cia learns to accept. Similarly, I appreciated learning the fate of those who fail the testing or who are asked to leave university (they DO help out their country…but not in the way everyone thinks they do). Things are almost framed in a “necessary evil” kind of way, and I like that very much. (That said, I’m not sure I buy the genesis of The Testing as a process, and the means by which how it became so entrenched and essential for government. Still, I appreciate the effort.)

Also successful was the overall arcs of several main characters in the trilogy (albeit not necessarily character growth or subtlety in actual holistic development). I loved that Cia questions authority in this book, as opposed to trusting blindly in the President, or other peers who appear to be on her side. Similarly, I thoroughly enjoyed the moral ambiguity of so many other characters, from the proven ruthless Will, to the questionably intentioned Raffe, to the ruthless Stacia. Even President Collindar and Dr. Barnes are pleasantly layered in this final installment.

On the negative end of the spectrum, however, there were some frustrating points regarding actual narrative structure and writing style in Graduation Day. Most grating was Cia’s internal narrative, because of its repetitive regurgitation of past events and internal monologuing as she decides who she can trust (or her incessant recitation of all of the reasons why she cannot trust them). This, in addition to overt, ham-handed symbolism which is then explained in depth to readers, is incredibly annoying. For example:

I came to Tosu City unmarked. I thought I understood what leadership meant and what I would face if I was selected for The Testing. These five raised scars remind me how far I have come and how much I have changed. Because it is not just the outside that has been marked. Where my beliefs were once black and white, I now see shades of gray. My father must have sent hose shades, too. He suspected what The Testing entailed. He could have made the choice to help me flee. He and the other leaders of our colony could have found a way to eliminate the Tosu City official before he had a chance to inform eh four of us that we were chosen.

Still, for all its lack of subtlety or grace, Graduation Day succeeds because of its fast-paced story, gutsy main characters, and surprisingly moderate ending in terms of political ramifications.

I enjoyed it, at least. And if you’re a fan of tried-and-true dystopian YA, I think you’ll enjoy this trilogy, too.

Notable Quotes/Parts: You can read an excerpt of Graduation Day by visiting this link.

Reading Next: The Girl from the Well by Rin Chupeco