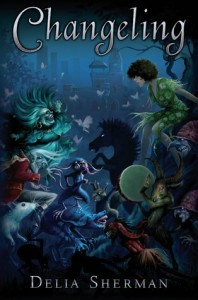 A determined heroine, a quest adventure galore!
Neef is a changeling, a human baby stolen by fairies and replaced with one of their own. She lives in “New York Between,” a Manhattan that exists side by side with our own, home to various creatures of folklore. Neef has always been protected by her fairy godmother until she breaks a Fairy Law. Now, unless she can meet the challenge of the Green Lady of Central Park, she’ll be sacrificed! Neef is determined to beat the rap but time is running out . .

Stand alone or series: Stand alone (but there is another book with the same heroine The Magic Mirror of the Mermaid Queen)

Why did I read this book: I loved Delia Sherman’s The Freedom Maze and wanted to read more from her. Changeling sounded really cool.

Neef is a changeling, a human baby stolen by fairies who lives in the Central Park of New York Between, an Otherworld Manhattan that co-exists with our own, inhabited by all sorts of Fairy Folk. Neef (whose real name she doesn’t care to disclose to just anybody since – as you know – real names have power) has been brought up by her fairy godmother the white rat Astris and lives under the protection of The Green Lady, the Genius of the Central Park. Neef’s days are spent in relative tranquillity, learning about Folk Lore and attending lessons at her world’s (awesome) version of the Metropolitan Museum.

But Neef is super curious and yearns for adventures. And it is that curiosity that lands her in trouble and she ends up (unknowingly) violating a geas put on her and breaking Fairy law. The result is that she is to be banished from home after losing the protection of the Green Lady, effectively becoming prey to the Wild Hunt. But there is always a way out or a bargain to be made when it comes to the Folk and so Neef and her friends convince the Green Lady to accept a deal: Neef is to go in search of three objects, all of them close to impossible to obtain. Even as scared as she is, Neef takes the challenge as it ought to be taken: as an opportunity to go on a quest and to finally live a Grand Adventure. And a Grand Adventure she has – from being kidnapped to meeting her fairy changeling, from facing mermaids and dragons to meeting the Bull of Wall Street, it’s all very worthy of a cool heroine who deals with all the obstacles with smarts and determination (and sometimes, tears).

At the end there is definitely some growth (as any real quester will tell you) and so Neef grows up but interestingly enough, she doesn’t grow human – or at least, I didn’t read it as such. Her sense of ethic is shaped and determined by the Folk stories she knows. She has been completed integrated to her life – she never once thinks about leaving her fairy life for a mortal life, for example. She also knows all the supposed rules of a Quest and everything that relates to stories and she uses this knowledge to her advantage, even when it means breaking those very rules. Part of what made this book such a pleasure to read was the fact that Neef has so much awareness about Fantasy and Folklore tropes. I also loved how varied those stories were as the premise is that the mortal immigrants who moved to NY from all over the world have taken the Folk – and their stories – with them and even beloved book characters become alive in New York Between.

That said, I picked Changeling to read after reading and loving Delia Sherman’s amazing The Freedom Maze and I was curious to see how both books compared (or not). I am saying this as a matter of full disclosure: this is how I read this book. So, they are very different books in the end, with very different stories and motives. But I thought it was very interesting that both heroines shared a couple of traits. Both departed on their stories because of the similar impetus that both protagonists shared: the desire to go on an adventure. Plus, both of them loved stories and had a certain awareness of tropes relating to fairytales. The difference lies in how The Freedom Maze’s heroine awareness did not help her at all because, even though there were fantastical elements in that story, she was living in the “real world” whereas Neef uses those to her advantage and with success – but then again, Changeling is a Fantasy story through and through.

That also transcribes in how the two stories progress: Changeling is a very, very light romp – even when Neef is at dangerous moments, that danger never really comes through. In fact, that is my biggest problem (if I can even call it that, considering how I enjoyed it) with Changeling: considering the stakes, considering the creatures Neef has to face, the challenges proved to be extremely easy and work out perfectly in the end. I wondered: isn’t it also part of traditional stories that there are great costs to a protagonist on a quest? In that sense, I thought that The Freedom Maze explored that idea much better. Having said that I am also very much aware of the fact that it is not really fair to compare the two books on those grounds but there you have it.

Changeling is supposed to be a light, fantastical romp with a very cool heroine and on its own, it is one of the most imaginative Middle Grade Fantasy stories I’ve had the pleasure to read.

All Folk love stories. They love to hear them nearly as much as they love to tell them. I’ve heard stories from Japan, Brazil, Ireland, Russian, Kenya, Jamaica – just about every country in the world whose Folk have followed the mortal immigrants to New York. Astris, who is a native New Yorker, specialises in New York stories like “The Sewer Maintenance-Worker’s Wife” and “Little Red Baseball Cap.” The stories are as different as the Folk who tell them, but the one thing they have in common is morals. “Don’t be greedy” is a popular one, and “Don’t ask too many questions,” and “Don’t be too curious,” and “most important of all, “Don’t break the rules.”

I love the stories, but I could live without the morals. They all boil down to Don’t. Don’t do this. Don’t talk to that. Don’t turn around and look when you hear a strange noise. Don’t turn over stones to see what’s under them. Don’t swim in Harlem Meer or walk on Sheep’s Meadow without a Shepherd. Don’t ride on any black animal with flaming eyes. Because if you dom you’ll be sorry, sorry, sorry, sorry.

Reading Next: The Book of the Maidservant