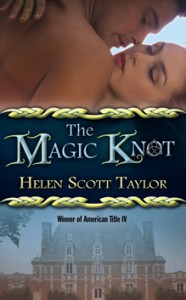 Stand Alones/ Series: First in a series of contemporary Fantasy romance but can be read as a stand alone.

Summary: HE’S A BIKER WITH AN ATTITUDE

What woman wouldn’t be attracted to Niall O’Connor’s soft Irish brogue and dark good looks? But Rosenwyn Tremain must find her father, and she isn’t going to let a sexy, stubborn Irishman and his motorcycle distract her. Rose’s intuition tells her he’s hiding something, a secret even the cards cannot divine. Her tarot deck always reads true, but how can one man represent both Justice and Betrayal?

SHE’S A WOMAN ON A MISSION

Magic. Niall’s body tingles with it when he finds the woman snooping in his room. Rosenwyn might believe she’s a no-nonsense accountant, but her essence whispers to him of ancient fairy magic that enslaves even as it seduces. Her heritage could endanger those he’d die to protect, but her powers and her passion, if properly awakened, might be the only thing that can save both their families, vanquish a fairy queen bent on revenge, and fulfill a prophecy that will bind their hearts together with… THE MAGIC KNOT

Why Did I Read The Book: Shhhh. I received an ARC from the book fairy

The Magic Knot is the winner of the 2008 American Title IV contest sponsored by Romantic Times magazine and Dorchester Publishing, and as such it was chosen by the magazine readers – American Idol style. I will admit I was wary of reading The Magic Knot but in the end I found myself pleasantly surprised.

Rosenwyn Tremain, Rose for short, is an accountant from London who journeys to Cornwall to investigate the financial situation of one Michael O’Connor, the Irish owner of the Elephant’s Nest Pub. Rose’s plan is to spend a couple of days having a look at Michael’s books , assessing his debt and then go searching for her Cornish father – even though her mother has pleaded for her not to , for her to never EVER set foot in Cornwall or to go looking for her father. Without understanding her reasons, Rose is at a lost and decides to search for the truth.

But the truth is something that is going to change her life forever and this change begins practically on the same day she sets for on the Elephant’s Nest. First she realises that the eerily handsome and attractive Michael is living beyond his means. Then, he tells her his twin brother Niall, would help her with the accounts. She is immediately attracted to the silent and detached Niall but he shuns her and tells her that there is no computer. She decides to nose about and goes into Niall’s room where she feels strangely pulled by this box and when she opens it she finds inside a piece of jewelry identical to the one she has always carried around her neck – but what she only thinks as jewelry , Niall sees for what it is – a Magic Knot, an important Irish symbol that embodies a person’s body, mind and soul. A Magic Knot is so important that you keep it hidden always and once Rose touches Niall’s they form a bond that can never be broken and their story so begins but this is only but the tip of the iceberg.

Niall and Michael are Irish Fairies and Rose finds out that herself is the daughter of a Cornish pisky (another kind of fairy) as her mother was the daughter of the Pisky King which means that Rose is next in line of succession. Her mother took her away from Cornwall when she was a child trying to escape her druid father who in a crazy search for power imprisoned the entire court by destroying their Magic Knots and keeping their souls in portraits that Rose’s mother painted. But that is not all –as Niall is in Cornwall hiding from his own Queen – also known as The Queen of Nightmares – trying to keep his sister and brother safe from her and has been using Tristan’s (that is Rose’s father) magic to hide them and now Tristan uses this as leverage to ask for Rose in return – he wants the portraits that only Rose knows the whereabouts of.

The plot thickens when Rose decides to to free her people and the only person to help her is the Queen of the Nightmares herself and they must journey to Ireland to meet her but not before they go through a series of challenges not least their own inner struggles and Niall must make a choice – is he going to prove to be for Rose or against her?

Wow – The Magic Knot has quite the intricate plot for such a short novel and I was impressed at how there was no lose ends and everything was very well done. From the villain’s motivations to the journey to Ireland and back and how the story reached its climax, not once I lost track of events of thought anything was out of place – expect maybe for one point. That was when the sex was brought into the equation – in an action packed novel, where the happenings kept coming left and right, it felt less than organic to have a sex scene where it was – and with a reasoning that made me roll my eyes all the eye to the back of my skull. It was as if the author was running out of pages, realised the required sex hadn’t happened yet, panicked and inserted it there. Then again, maybe not , maybe it was her idea to have it that way but in my most humble opinion it didn’t work.

Speaking of things that didn’t work. Oh Niall, could a hero have less self-esteem than this one? At first it was ok – it is not always that you get a hero that is not always sure of himself, that thinks himself so low and undeserving (yeah, you guessed right, daddy issues) whilst at the same time being so proud as to refuse to bend to his own Queen but his woe-is-me mantra got old soon enough as he kept walking away from Rose over and over again. Give me a break. I was also slightly put-off by his Irish accent – ‘tis only so many times I can cope with it, lass.

Rose on the other hand, was a pretty strong protagonist. Down to earth, whose acceptance of her new role in life came with not a small measure of panic but with the help of old memories and a self-confidence that came from knowing her own strengths she was determined to do right by her people. She was brave without being tough or abrasive and I was really appreciative of that and she was really, really patient with Niall as well. Sometimes way too much.

As for the plethora of secondary characters – from the villains Tristan and the fairy Queen or Troy, the twins’ father, they were fairly well executed. The ones that shone the most were Michael the care-for-nothing , funny rogue who stole a lot of scenes (and a bit of my heart) and another that was very intriguing indeed – a pisky fairy who is called Nightshade who has vampiric qualities and forms blood bonds with people. When the book opens he is bonded with Tristan and firmly set on the villains side but then he decides he wants Rose (and possibly Niall and Michael as well – and he succeeds, sort of – oh.la.la) and his interactions with all of them are very interesting.

All in all? A Very solid debut. I would most certainly read more by Helen Scott Taylor – hey Ms Taylor, what about that fantabulously intriguing Nightshade next?

Notable Quotes/ Parts: I really liked the action sequences as they approached the entrance to the Irish court where Niall and Nightshade had to fight and Michael had to go in butt naked! Humour and action – very cool

Verdict: Solid debut novel with both plot-driven and character-driven story that is well-worth a read

Reading Next: Scandal by Carolyn Jewel