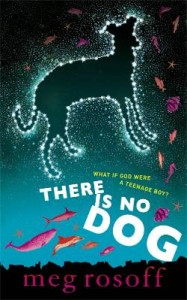 Title: There Is No Dog

Meet your unforgettable protagonist: God, who, as it turns out, is a 19-year-old boy living in the present-day and sharing an apartment with his long-suffering fifty-something personal assistant. Unfortunately for the planet, God is lazy and, frankly, hopeless. He created all of the world’s species in six days because he couldn’t summon the energy to work for longer. He gets Africa and America mixed up. And his beleagured assistant has his work cut out for him when God creates a near-apolcalyptic flood, having fallen asleep without turning the bath off. There is No Dog is a darkly funny novel from one of our most delightfully unpredictable writers.

How did I get this book: Got a review copy from the publisher.

Why did I read this book: I read and loved How I Live Now by this author and kept meaning to read other books from her. When I was offered a copy of There is no Dog I said HELL YES, not only because of my own good experience with the author’s writing but also because of some early reviews of the book.

As we all know, in the beginning, God created the heaven and the earth. But the preferred candidate for God withdrew at the last minute because the Earth was so badly positioned, off the beaten track in a rundown part of the universe. Time was passing and since no one would apply to the job, the administrators decided to offer the position as part of a bet on a game of poker. The winner promptly turned it over to her temperamental and inexperienced teenage son Bob, who, in coalition with Mr B., an old and more experienced administrator, was put in charge of our planet. Bob then proceeded with creation and created everything in a burst of teenage creativity and arrogance, in a mere six days.

Now, thousands of years later, Mr B. is still trying to tidy things up, answering as many prayers as he can, as Bob spends his days doing whatever he wants to do. Then he falls in love with a human named Lucy and what happens when Bob falls in love?

This new book by Meg Rosoff is, for lack of a better word, brilliant. It is beautifully written almost in a fairytale-ish style. It is surreal, funny and zany in a Douglas Adams kind of way but also engaging, thoughtful and hopeful in unpredictable ways. At least it was for me and in fact, part of the beauty of this book in particular is that it embodies what is the most important thing about reading, in general: that it is open for interpretation and each reader will get from it only as much as they are willing to put into reading it.

Take for example: Bob. He is the embodiment of a teenager (and an eternal one at that): wilful, insufferable, horny, so self-absorbed to the point of being almost monstrous but also capable of limitless creativity and earnest attempts at doing the right thing (well, mostly). He is part of a pantheon that is loosely reminiscent of Greek gods but is ultimately Ms Rosoff’s own. There is definitely a degree (this is the understatement of the century) of questioning religion here but and this is very important, there is no questioning faith itself. This is a very fine line to walk and one that I felt, was done respectfully.

Having said that and going back to what one takes from such a read, this is what I came away with after reading There is no Dog:

That it is not really about god or religion at all. It is about us, humans and about people who are determined on not letting the worst happen. About the mess our planet is in, about ethics, mortality and about all the terrible stuff that happens in the world and about the end of all things.

But it is also about romantic love and everything that comes with it, all its ups and downs: hope, lust, excitement, tears and endings and beginnings. It’s there between Lucy and Bob but also between several other characters.

It is about other kinds of love as well: love for the Earth, love for the Whales (yes, you heard me right), love for one’s congregation, love for a Zoo, forbidden love, unrequited love and friendship.

About miracles that can happen when one least expects it, about beauty and about hope.

Above all, I came away loving the Eck, a secondary character. He is Bob’s pet, a penguiny creature, the very last of its species who lives basking in adoration for Bob. His destiny is too decided on a game of poker and he is to be killed and eaten very soon by another God. The Eck spends most of the book worried about this prospect, facing his own mortality, questioning:

Yes, he would have to die; yes, he would be forgotten and the world would go on forever without him. With no mitigating circumstances to make the horror easier to swallow.

It strained his relationship with Bob. Why did you bother creating me, he wanted to ask. Why bother giving me a brain and a realization of how miserable existence can be? Why did you invent creatures who die, and worse, who know they are going to die? What is the point of so unkind an act of creation?

The Eck is my favourite character because he is our mirror.

Finally, I also learnt that Meg Rosoff is a freaking genius and that I have another awesome book to add to my top keeper shelf (and my top 10 of 2011).

Notable quotes/Parts: There is this chapter close to the ending of the novel in which several characters drift whimsically in boats under the starred sky and each character is musing about their lives and it is such a beautiful sequence that I re-read it many times. Just a snippet:

Estelle drifts by in her little boat, near enough for Mr B to see that she cradles something in her lap. It is the Eck, a softy putting Eck, eyes twitching and half-closed with bliss as she strokes him. She murmurs sweet words to him and he wriggles a little, snuggling closer; the sound he makes isn’t one Mr B has ever heard before – a sigh of such perfect complexity that it rewrites everything he has imagined Bob’s pet capable of feeling.

Something about this scene ignites a tiny flame in Mr B’s heart and he cannot tear his eyes from it. Estelle is not beautiful – but the pure clarity of her features makes her as irresistible to him as an angel. He would like to be in the boat with them, in the place of the Eck. He would like to be held in the arms of this clear-eyed, clear-voiced girl, who seems to be the only creature among all his acquaintances who cares for something besides self-glorification and the gratification of her own desires.

It might cause considerable surprise to the informed observer (who does not exist) to note that Mr B’s eyes begin to fill with tears. They overflow and spill down along the deep soft crease of his careworn face as he sits very still in the centre of the unstill world and weeps rivers of salty water for all the lost souls, including his own.

Seven comets streak across the dawn.

Additional Thoughts: Make sure to stop by later today to read our interview with Meg Rosoff!