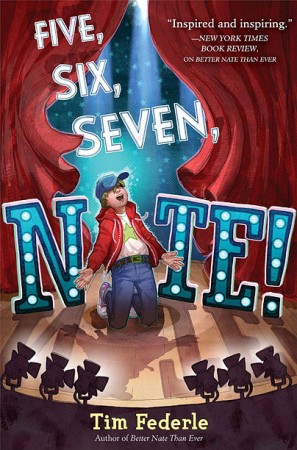 Nate Foster’s Broadway dreams are finally coming true. Armed with a one-way ticket to New York City, small-town theater geek Nate is off to start rehearsals for E.T.: The Broadway Musical . It’s everything he ever practiced his autograph for! But as thrilling as Broadway is, rehearsals are nothing like Nate expects: full of intimidating child start, cutthroat understudies, and a director who can’t even remember Nate’s name.

Now, as the countdown to opening night is starting to feel more like a time bomb, Nate is going to need more than his lucky rabbit’s foot if he ever wants to see his name in lights. He may even need a showbiz miracle.

Stand alone or series: Sequel to Better Nate Than Ever but can be read as a standalone

Why did I read this book: Because I really liked the first book Better Nate Than Ever (reviewed HERE).

Nate Foster’s dreams of Broadway have paid-off and now he is back in New York (with a one-way ticket from small town Jankburg) as the understudy to E.T.’s understudy in E.T.: The Musical. While the show’s rehearsals are on full swing, continuous last-minute changes to the script and internal drama between actors and producers raise alarm bells. When things escalate, doubt arises that they can perform the expected previews which are essential to any Broadway success.

In between all this, Nate also needs to deal with the developing difficult relationships with his older colleagues, his home life left behind with increasingly pressure from his father to bring money home and a potential romance with a co-star.

Stakes are higher in this sequel to Better Nate Than Ever, recently awarded a Stonewall Honor Book of 2013. With a humorous, light-hearted narrative, Five, Six, Seven, Nate! follows Nate’s dream of starring in a Broadway musical. Although those dreams are closer to coming to fruition, external circumstances outside his control could get in the way – this adds welcomed drama and tension to a story that could have been otherwise stilted after its main character’s success in book one.

Whereas the joyous tone of the novel and its unabashedly love for theatre and Broadway are intrinsic in terms of plot and characterisation, Nate’s narrative is one that likewise keenly discloses the journey of a vulnerable young boy toward feeling comfortable in his own skin. Yes, love for the theatre and musicals is a huge part of that, and something that makes him feel out-of-place and back home. Apart from his best friend Libby, who fully gets him, he is mostly a lonely boy who is bullied by “friends” and family for loving what he loves. One of the best things about these books to me, are the small moments when Nate meets new people who equally love theatre and dancing and singing. The importance of this shared intimacy can never be overstated.

Another extremely important aspect of these books and part of Nate’s developing sense of self is his struggle to fit in with traditional ideas of “masculinity” and his understanding of his own sexuality. If in book one, there was a self-determination to avoid any firm definitions, in book 2 things progress to a point where Nate is definitely more comfortable in admitting he likes boys. This comes towards the very ending and if it wasn’t a huge spoiler because of who he hooks up with, I’d happily include the full quote here. Suffice it to say, Nate’s first kiss with a boy was beautifully portrayed in terms of awkwardness, questioning and tenderness. It was the cutest thing.

On the downside, there are some truly cringe-worthy off-mark jokes like “Yikes, Monica is a slave driver, if slave drivers dyed their hair stop-sign red” – to wit: no. Can we avoid comparing ANYTHING that is not slavery to slavery?

In spite of those, Five, Six, Seven, Nate! is actually a more rounded, better book than its predecessor. The writing is more self-assured and the problems I had with the first-person present-tense narrative have been mostly ironed-out to create a more cohesive, natural narration. I loved this and highly recommend these two books.

Notable Quotes/Parts: I caved and had to include this scene between Nate and Libby in which he talks about kissing another boy and how he couldn’t see himself talking to his parents about the biggest night of his life. It’s beautiful but spoilery. You have been warned!

I open my eyes and look up at Heidi’s ceiling, which is so dark I could fall into it forever.

“And I wouldn’t be able to tell my dad that Jordan’s like me, too, and that families who live in bigger houses aren’t always happy. And that starring on Broadway can actually be a lot of pressure.”

“And I definitely wouldn’t be able to tell my brother— or anyone—that Jordan and I kissed tonight.”

A hundred thousand seconds go by in one, and then Libby puts her hand on my shoulder and just sort of doesn’t say anything, because sometimes that’s the best way to say it all.

“And that’s that. And that’s maybe why I’m not going to tell my parents— yet— that I became a Broadway star tonight.”

Libby pulls her hand away and we close our eyes and we’re both about to fall asleep, when I add one more thing.

“It actually doesn’t even matter to me that I missed the whole party at Sardi’s because I fainted and scuffed my knee.”

“Those pants needed to go anyway,” Libby says like a dream. Or in a dream. Or singing out from a dream.

“All that matters is that I’m proud of myself.”

Tonight I lived up to me. Not Dad or Mom, or Anthony’s legacy. Tonight I was myself, because everybody else was taken.

“For literally once I’m proud of myself.”

Reading Next: Mistwalker by Saundra Mitchell