Today, we bring you two reviews for pretty well-known books that for some reason we hadn’t picked up yet. Before the onslaughts of “I CAN’T BELIEVE YOU HAVEN’T READ THAT?!” begin, let us just offer our profuse apologies.

But we’ve rectified that. Ladies and Gents, please accept these reviews as atonement: we give you our “WHY HAVEN’T I READ THESE BOOKS!?!” Day.

Ana’s Pick: Monster by Christopher Pike (you can check Thea’s pick, the review of the Uglies Trilogy by Scott Westerfeld here) 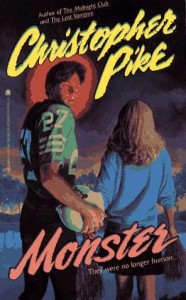 Thea has been raving about Christopher Pike’s books to me for a long, loooooooooooong time.Last year, she wrote an incredible Dungeon’s post about his books and I was seriously tempted to give them a try but never did.

So, WHY did it take me so damn long to read a Christopher Pike novel? Because Horror is not one of my favourite genres. I tend to find most horror stories either very silly or very scary, the latter being the main reason why I do not read horror being the huge pansy that I am. Then, Thea sent me Monster as a birthday gift last month and that was the cue I needed to finally read it. I open the book and the first lines are ominous:

“It began with blood.
It would end the same way.”

Thus, I am thinking right there that this book will fall on the “silly” side instead of scary side. But them Angela, our protagonist, decides to do something and there is a kick-ass fighting scene between her and Mary complete with a kick on the face and everything. But Mary is woman on a mission and she chases after Jim, as he tries to flee jumping off a window from the first floor unscathed (clue numero uno that may be something weird about Jim) and they run into the woods. Angela runs after then to try and stop Mary and help Jim since she knows the area so well. That is when Angela tells her that “he is not human”. The police end up arresting Mary but not before she manages to shoot Jim on his leg.

She is taken to prison and Angela visits her one day later and they have a heart to heart conversation where Mary says that the football team and the cheerleaders are different somehow, behaving strangely, stronger than before– her verdict is that they are monsters and that she needed to kill them. Angela, quite appropriately thinks that Mary has lost it.

And promptly decides to carry on with her life and starts dating Jim, who by the way, recovered pretty quickly from being shot (clue numero dos that Jim may not be alright after all). But back to Angela: her best friend is in jail for a truly horrible crime, teens have been killed and the girl just goes about like nothing happened, because she is oh, so horny for the hawt jock. Dear readers, this is when I decided that definitely, 1) this was going to be a silly story and 2) that Angela was the monster of the title. Because, really. What.a.biatch.

Boy, was I wrong. Because Jim and Angela hook up and kiss and then go swimming in Point Late, a.k.a. Lake of Doom (which may or may not have something to do with the things that happen next) and then Jim gets hurt and there is blood everybody and he sort of spreads the blood on Angela’s belly (and I am like, DANGER WILL ROBINSON, DANGER WILL ROBINSON) and that is when things get really, really scary. Because Angela is now hungry. Like, I- need-to-eat-raw-meat-now-now-NOW hungry and the coin drops leading her to start investigating Mary’s claims and learning more about the history and mythology of the town. And it is all very interesting and all but really, the strength of this novel lies in Angela, and how her character goes through this slow, horrific process of transformation whilst at the same time being completely aware of it. By the -INEVITABLE- end of it, she knows what she is going through and why and this certainly makes for compelling reading. Because Angela does have a mean streak, an attraction to the Dark Side of the Force but she is also painfully, fully human. And that humanity of Angela is what compels her to at least TRY to do the things she does towards the end of the book.

The human factor though is the most saddening of it all. And I can’t go on without talking about Kevin, Angela’s friend, the requisite Geek Sidekick with the crush on the Girl. There is one very poignant scene where he learns that she is going out with Jim and he gives her a hurt look and asks “what’s wrong with me?” and I was like awwww Duckie! 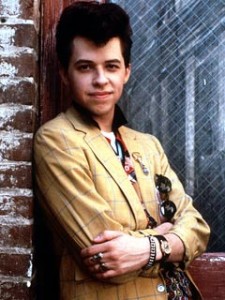 The sweetness of Kevin’s character only adds extra sorrow and horror to a later sequence in the book, the sequence that caused me to have one night full of nightmares and which definitely, totally moves the book away from “silly” to “scary”.

So I email Thea to say that I finished reading the book and that against all odds, I did like it, although probably not as much as I would have had I been a Horror fan. She emails me back, and says, Thea-Style: “isn’t it beautiful”? er, HELL NOES. It is freaking scary, that’s what Monster is, which I am sure is the whole point. (But also, a little bittersweet, which I guess could be seen as beautiful by some).

Verdict: a little bit silly to start with but undeniably scary when the plot gets going.