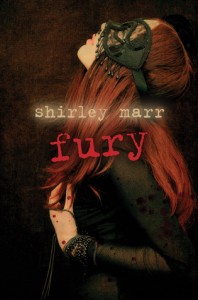 Eliza Boans has everything.
A big house.
A great education.
A bright future.

So why is she sitting in a police station confessing to murder?

How did I get this book: One of our regular readers (hi Yeti!) sent us an email praising the book as one of the best YA they had read in a while. Obviously, I had to check it out. Unfortunately Fury is not available anywhere outside Australia (unless you buy it via Fishpond at a higher than usual price. They do have free international shipping though). I was then having a moan on Twitter (as you do) about not being able to download this book quickly when Carla (hi Carla) said she had a copy I could borrow. I love my blogging friends. She got the book sent to me straight away and I read as soon as I could.

Why did I read this book: See the above. Plus, it sounded so good, plus LOADS of great reviews for it on Goodreads.

“So it is just you and your friends then.”

“Yes. Is that so hard to believe?”

Is it because we’re girls? I want to say. You think a bunch of girls are not capable of something like this?

This review starts with a confession (rather appropriately too, since the book also starts with its main character confessing that she is a murderer): I came into this book knowing very little about it but still expecting it a great deal from it after it was so highly recommended to me. And it was sort of disappointing to start the book by finding out that I was reading yet another Mean Girls Gone Wrong YA novel. But the more I read, the more I wanted to read and soon, disappointment turned into compulsion and eventually, into love. The more I think about Fury the more I find things to like about it.

In theory, Eliza Boans has everything: looks, riches, a good education, a bright future. But she is at a police station being interrogated under suspicion of murder. How, when, where did things go so wrong? Fury is Eliza’s account of a murder and the events that led to it.

Right off the bat it has to be said that Fury has a set up that begs for suspicion of disbelief in terms of criminal procedure. I mean, this teenager is sitting at a police station being interrogated by a doctor (not a detective) , still clothed in her bloody attire hours after being arrested (aren’t her clothes EVIDENCE? Were the CSI officers on vacation?), without a lawyer or a phone call. Furthermore, the doctor is able to take her out for meals OUTSIDE THE POLICE STATION even though it is clear that she is a suspect.

I am willing to bet that how much a reader will appreciate Fury relies not only on how much each reader is able to suspend that disbelief but also on how they will feel toward Eliza and the characters. Because you see, Fury is populated by a plethora of completely, utterly unlikeable characters. Mostly everybody in this book is a little shit – pardon my French.

Eliza herself is an unapologetically privileged brat. She is the head of a Mean Girl clique, attending this ultra posh school and living at a walled suburb for the extremely wealthy and which is basically cut off from the rest of the world. She is angry (at her absent mother most of the time), envious, not nice at all, she mistreats people, she thinks of herself as the big cojones of her small group of friends (and acts as such) and she manages to make ALL THE WRONG DECISIONS. Some of them with dire consequences. She also shows NO REMORSE whatsoever for what she has done (even if there are mitigating circumstances).

Because at its heart, this is a story about poor little rich girls. They are either abandoned by absentee parents or expected to succeed at all costs. There is pressure from school, from society, from their peers. The story takes place in a school environment full of cliques, bullying and a ruthless pecking order. Not to mention that the suburban paradise they inhabit is not paradisiacal at all – in fact, I often thought of the word “dystopian” when thinking of its walled wealth, separated from the rest of the populace in many ways but still connected via its basic humanity.

There is also an astute commentary on rape culture in this book. The rape culture that fails people so often, which allows these girls to feel like they have nobody they can to talk to, that allows them to feel ashamed or scared to go to a doctor or to seek help because hey, the first question they are asked either involve the clothes they were wearing or what they had been drinking. A rape culture that worships boy stars, in which adults utterly fail the kids they should be taking care of. It is sickening and truly heartbreaking.

This is without a doubt a really tragic book in many ways. Not only for what happens to certain characters (OH, NEIL) but also because of the way they feel about those events. It is really easy to see how Eliza would feel like this:

I was thinking that if it really was my fault, if every reaction could be traced to an action before, then at the very beginning would be me at the canteen queue with my twenty-dollar note instead of my packed lunch. In turn I could blame my mother for not caring enough and maybe I could blame my father for making my mum stop caring. Maybe all this was supposed to happen. It had been happening all along. It was too hard to try and stop it now. In a twisted way, there was cold comfort in that.

Like she had no choice. Of course she did, but the tragedy here is her thinking that she did not. Furthermore, there is the question of the narrative and the way Eliza slowly divulges the facts that led to this murder. It is all really suspenseful and even though it is easy to guess WHAT happened, the reactions that ensue are really what matters here. It is also through her narrative that we see other sides of Eliza and of her friends. They are clever and extremely loyal to each other and through her narrative, little by little, we see what matters to her, how she is broken up by what happened. It is really, really clever the way the story is written and in the end, I was able to sympathise with such an unremorseful character. She is a fantastic character even if she might not a likeable one. She actually reminded me a lot of one of my favourite unlikeable YA characters of all time, Bindy Mackenzie (Australian authors tend to write such awesome ContempYA…something in the water, I guess).

Shirley Marr managed to turn this into not only into a compelling story but also one that I loved so much, with the awesome writing, Eliza’s voice and her story which, as familiar as it is also allowed great commentary on society. Because of those I was able to suspend my disbelief willingly and happily and enjoy a story that I would not otherwise (really not a fan of poor little rich people stories) . And I didn’t even mention: the many, many connections to Jane Austen AND the fact that these girls take upon themselves the roles of the mythological Furies. The cleverest thing of all? The open ending in which YOU have to decide what happens to Eliza – and that will probably be based on how you feel about her, her friends and their actions.

So here I stand taking my hat off to the author: kudos, Ms Marr.

My name is Eliza Boans and I am a murderer.

To think I actually had a better surname before my parents divorced and my mother went back to her maiden name, taking me kicking and screaming with her. See, the judge gave Dad the Jag and gave Mum, well, me. She spewed big time over that. But seriously, unlike what that do-gooder Chaplain here thinks, I didn’t just wake up one morning and say to myself, “what a lovely day, I think I might go out and kill someone.

I’m the last person that anyone would have suspected.

I’m just Lizzie, typical teenager. I’m all about angst, attitude,
designer labels and cupcakes. I want to grow up and do something cool with my life, such as build an orphanage in a third world country like all those saintly Hollywood celebrities. That or, like, cause a scandal and become megafamous. Everyone knows that’s how you get noticed these days. I live in the suburbs, go to high school, and my mum has all these unrealistic expectations of how well I’m going to do in Year Twelve blah, blah, blah. The only difference between you and me is that I live in East Rivermoor.

A great wall runs all the way around our suburb. Access is through a double gate that has our own special crest on it. This is not just any neighbourhood; check your reality before you enter.

Reading Next: Keeping the Castle by Patrice Kindl.

Yeah, given how this is an Aussie book, there isn’t a lot of choice where you can buy it. Go HERE for more information.

Over at Kirkus: Short Stories for the Hugos