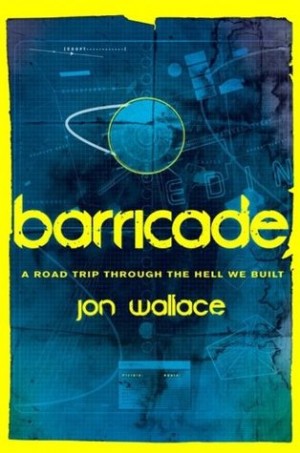 Kenstibec was genetically engineered to build a new world, but the apocalypse forced a career change. These days he drives a taxi instead.

A fast-paced, droll and disturbing novel, BARRICADE is a savage road trip across the dystopian landscape of post- apocalypse Britain; narrated by the cold-blooded yet magnetic antihero, Kenstibec.

Kenstibec is a member of the ‘Ficial’ race, a breed of merciless super-humans. Their war on humanity has left Britain a wasteland, where Ficials hide in barricaded cities, besieged by tribes of human survivors. Originally optimised for construction, Kenstibec earns his keep as a taxi driver, running any Ficial who will pay from one surrounded city to another.

The trips are always eventful, but this will be his toughest yet. His fare is a narcissistic journalist who’s touchy about her luggage. His human guide is constantly plotting to kill him. And that’s just the start of his troubles.

On his journey he encounters ten-foot killer rats, a mutant King with a TV fixation, a drug-crazed army, and even the creator of the Ficial race. He also finds time to uncover a terrible plot to destroy his species for good – and humanity too.

Why did I read this book: Two things: Christopher Priest wrote an eviscerating review of the novel which promptly generated discussion online (is this a too “cruel” review? is it too “harsh”? Should we write MORE reviews like these?). Around the same time, the author of the novel wrote this damning guest post about writing women which also generated heated conversations.

Well, I got curious.

At one point when reading Barricade it struck me how there were only but a few women present in this narrative. The three main characters (two men, one woman) travel around Britain for weeks and they meet dozens of people and barely any of those are female. This world seems to be populated mostly by “he” (soldiers, survivors, fighters, scientists, workers, heroes and anti-heroes ) with the occasional “she” (pleasure “bots”, incompetent supervisors, victims, a kindly old woman, a dead wife and one rapist) thrown in for good measure.

Where are all the women in this world, I asked myself, how can you imagine a whole future and not imagine women in it?

Barricade is a post-apocalyptic novel in which the world has gone to shit. At some point in the future, “artificial” humans have been genetically engineered and optimised to do the work “real” humans can’t or won’t do. The Ficials are a breed of super-humans, imbued with nano technology that makes them stronger, self-healing, emotionless and therefore, superior. At some point – when the world becomes too small for both Reals and Ficials to share what with all the global warming, food scarcity, diseases and wars and etc – Ficials stage a coup and start culling Reals and killing them all. But against all odds Reals fight back and resist. That resistance is still ongoing at the point when the novel starts, with a never-ending war between Ficials and Reals in a post-nuclear Britain ravaged by disease and death in which Ficials barricade themselves in hatches and bunkers.

The viewpoint narrative is that of a Ficial named Kenstibec, originally optimised for construction and now a taxi driver commissioned to drive Ficials from one surrounded city to another. His new job at the start of the book is to drive a TV presenter named Starvie down to London. Starvie is also a Ficial, originally commissioned to be a pleasure Ficial. Unlike most Ficials, pleasure Ficials’ emotions have been kept untouched.

This is a dangerous job which can only be carried out if they find a Real guide. They eventually co-op a terminally ill human whom Kenstibec addresses as “Fatty” throughout and who functions as the (somewhat broken) moral compass of the novel.

The official blurb will tell you that Barricade is “fast-paced, droll and disturbing”. It is certainly fast-paced. It is definitely disturbing. I am not sure about “droll” though. I can’t see how a book so violent and so misogynist can be described as amusingly comical. I mean, what is “droll” about the way the main male characters treat the main female character:

I gave her a quick, hard punch to the back of the head and she fell down onto the rocks. I picked her up, hoisted her onto my shoulder, and set off into the fog. I’d had about enough of hanging around.

I placed them [her luggage] on the bed next to her, sat down, and shook her until she came round. She seemed a little disappointed to see me. ‘We’re in your room,’ I said. ‘I think I found your luggage.’ ‘Did you hit me just then?’ ‘Yes,’ I said, ‘but it was only to hurry things up. You were getting all introspective.’ She touched the back of her neck and winced.

I stood up and made for the door, but I was knocked down by an explosion rocking the tower. Starvie was thrown from her bed and landed next to me with a cracking noise. I got to my feet as another three shells hit in quick succession. I listened to the barrage for a moment. Starvie lay still on the floor. ‘Hey,’ I said. ‘Get up, okay?’ She didn’t respond. I gave her a little kick in the stomach. ‘Get up.’

Shersult walked behind her and pulled the leather straps so tight around her waist she yelped in pain. She wheeled around and punched the side of his head. He didn’t notice, going about his work with careful and brutal pulls and twists, joining Kevlar to Kevlar so that no gap was left. Starvie huffed and struggled.

Nope. Nothing “droll” about this.

Of course, it is possible to make the argument that all this violence and the poor treatment of women is the point of the novel. That it is exactly what the book is attempting to criticise and do: to look at how terrible decisions have led humanity down a rabbit hole of self-destruction. I fully accept that this was the intention behind the novel but the execution of said intention fails.

The narrative is too superficial, too casual and it doesn’t really engage with the many questions it attempts to raise especially those concerning women and generalised violence. And the fact that the novel is narrated by an emotionless, amoral character does not excuse this, not when this has no effect whatsoever, not when this violence is not affecting in any way. To have a narrator such as this one is a narrative choice and one that is so easy to mishandle, case in point.

The idea here is, I presume, to show how the end of the world has turned everybody into monsters. The characters go around killing each other, punching each other, kicking each other. Nuclear weapons are detonated as though they are hand grenades. It doesn’t help that the narrative jumps from one point to the next without much of a cohesive, connecting tissue. All of a sudden, days have passed and we don’t even notice. The book can only be described as a “romp”, except when you read a romp you expect to be amused and entertained.

And then we have the treatment of female characters. At the beginning of this review, I called the book “misogynist”. Can this charge be levelled at a book such as Barricade if the novel itself is about a violent word, if the novel itself is narrated by an amoral, violent character with no emotions? Of course it can. Allow me to show you how. It is all down to narrative choices again.

In this world there are characters both male and female created exclusively for sexual pleasure. They are described thusly:

As pleasure Ficials were produced for nothing but bumping and grinding, they were widely regarded as useless. Of course, in Control’s new world no Ficial was to be left behind, so they were corralled into broadcasting, an occupation seen as meaningless but necessary while Reals still resisted the cull. I didn’t seek out their company. You never knew what they were going to get upset about. Their emotions were left largely intact during the Engineering process and I always expected them to start crying. Maybe that was unfair. They certainly dealt with being shot at pretty well.

It is a narrative choice that in this book, we never even see a male pleasure Ficial. Only female ones.

There is a moment in the novel when the trio of characters have to cross a barricade and they have a problem: two of them are Ficials, so how to get through the Reals? Their plan (made by the two men, they don’t even ask Starvie) is to throw Starvie at the Reals so that they can rape her. But it’s not like she is the only Ficial in the group, is it? No, it’s not:

‘What about me?’ I said . ‘How are you going to explain me to the people at this checkpoint? Am I going to be plunder too? Not very believable.’ ‘I’ve been thinking about that,’ said Fatty. ‘Camouflage is the name of the game. We need to make you look Real.’

So they use simple camouflage to hide Kenstibec but the thought of doing the same for Starvie does not even cross their minds. I guess that would make the book less edgy.

And even though later in the book, certain aspects of Starvie’s life are revealed and there is a great opportunity to turn all of this around and for Starvie to have a voice and agency, she is eventually further defanged so thoroughly and so disgustingly, I am surprised my head did not explode on the spot.

Worst of all? The quotes I used above with Kenstibec and Shersult’s treatment of Starvie make no sense. The two are emotionless Ficials, it makes no sense for them to treat Starvie – another Ficial created to aid Reals, just like themselves, regardless of what her optimisation is – with this amount of contempt when they do not treat each other like that. This is gendered violence that goes completely unscrutinised.

Well, it is my narrative choice to say: fuck that.

Reading Next: So You Want To Be A Wizard by Diane Duane