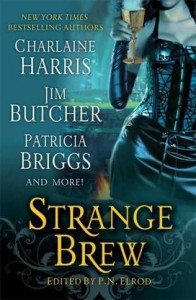 Why did I read this book: I have been anxiously awaiting Patricia Briggs’s new novella, “Seeing Eye,” since our interview with her this spring. Rachel Caine is another of my favorite (post-Anita Blake, heroine-centric) Urban Fantasy authors, so I was eager to see what her non-Weather Warden story would entail.

Summary: (from amazon.com)
Today’s hottest urban fantasy authors come together in this delicious brew that crackles and boils over with tales of powerful witches and dark magic!

In Charlaine Harris’ “Bacon,” a beautiful vampire joins forces with a witch from an ancient line to find out who killed her beloved husband. In “Seeing Eye” by Patricia Briggs, a blind witch helps sexy werewolf Tom Franklin find his missing brother—and helps him in more ways than either of them ever suspected. And in Jim Butcher’s “Last Call,” wizard Harry Dresden takes on the darkest of dark powers—the ones who dare to mess with this favorite beer.

For anyone who’s ever wondered what lies beyond the limits of reality, who’s imagined the secret spaces where witches wield fearsome magic, come and drink deep. Let yourself fall under the spell of this bewitching collection!

In “Seeing Eye,” Patricia Briggs returns to the world of Mercy Thompson, but follows an entirely new character – the witch (Wendy) Moira Keller. When Tom Franklin, werewolf and second in the Emerald City pack, shows up on Moira’s doorstep asking for her help in finding his kidnapped brother Jon, Moira cannot refuse him, even though it could mean her death. For Moira is no ordinary witch, and she has a dark past connected to those who have taken Jon – the Samhain Coven, led by the cruel and power-hungry Kouros. Together, Moira and Tom set out on Jon’s trail, using her magic and Tom’s strength to discover Jon’s fate, and to face Samhain once and for all.

I am continually awed by Patricia Briggs’s ability to write a complete, engaging story in a such a short amount of space. “Seeing Eye” is on par with another of her exceptional novellas, “Alpha and Omega,” and marks the beginning of a new, exciting character in the Mercy Thompson universe. Though readers of the Mercy Thompson and Alpha & Omega series’ have seen witches in prior books, they have never been fully explored or examined in detail before this story. As with werewolves, walkers, vampires and the fae, Ms. Briggs gives her own take on witches, and in this universe they amass power through death, sacrifice and pain, at the expense of others, or themselves. Moira’s power has come at an extraordinary cost, as Tom soon discovers.

As always, the characters in this story are vivid and compelling – like the Alpha & Omega book (and novella of the same title), “Seeing Eye” is told in the third person but with insights to both Moira and Tom’s thoughts. Moira, as a completely new character, holds her own with Mercy and Anna even in these short pages. A dash of Mercy’s straightforward attitude, a touch of Anna’s compassion, but with a deep strength that is entirely her own, Moira stands out as yet another winning Briggs heroine. She is, as the story blurb admits, blind, but the nature of her blindness is a twist that is guaranteed to shock readers – in a very good way (and I refuse to say more, for fear of spoiling it!).

Similarly, Tom (whom we met briefly in the Alpha & Omega series) is another compelling leading character. As a cop and a dominant werewolf Tom is intimidating in his own right, only made more formidable because of his irreparably scarred face, keepsake from a run-in with a fae knife a few years earlier. Though we barely get to meet Tom and Moira, the chemistry is immediate and undeniable. Though things wrap up nicely by the end of the story, I cannot help but hope that another series may be underway – a sentiment I am certain many readers will share.

Verdict: “Seeing Eye” is worth the book alone, especially if you are a fan of the Mercy Thompson and Alpha & Omega books. Another superb, tightly-written story from the formidable Patricia Briggs.

“Death Warmed Over” by Rachel Caine

Rachel Caine’s contribution to Strange Brew focuses on a world apart from her Weather Warden urban fantasy series, in a world where witches moonlight in extremely specialized fields. Holly Caldwell is one such witch with a rare affinity for resurrecting the dead, working at her day job when she receives a last minute email from her other boss, Sam – a request for a “disposable,” or a long-term resurrection from the local police department. Holly has sworn off disposables ever since her first and last job – because of the pain her impossible relationship with the resurrected caused her. Now, Sam and the police want Holly to raise the same man from her past, a powerful witch named Andrew Toland who died in 1875 fighting an army of resurrected dead gone violent (or more commonly, zombies). Though it pains her to reopen a relationship that is in all ways impossible, Holly breathes life back into Andrew. Unfortunately for them both, only later do they learn that someone has been killing resurrection witches, and Holly is next on the list.

As with “Seeing Eye,” “Death Warmed Over” is another self-contained novella, and one that is deftly plotted. Rachel Caine’s Weather Warden books are among my top three all-time favorite Urban Fantasy series’, in part because of her gift for writing storylines with high stakes and at break-neck speeds. In this sense, “Death Warmed Over” is familiar territory. Ms. Caine’s “Death Warmed Over” is an urban fantasy novella in the mystery/whodunit light, as someone is taking out all the local witches who specialized in resurrection. Though the ending seems a touch rushed, the overall plot is exceedingly well executed. I have to repeat myself – just as with Ms. Briggs’s entry, I am awed by Ms. Caine’s ability to write such a thrilling story with a clear beginning, middle, and ending in all of 50 pages.

“Death Warmed Over” also has more of a romantic slant, and the relationship between Holly and Andrew is nicely portrayed. One thing I admire about Ms. Caine’s writing is her ability to write different characters – her adult urban fantasy heroines, Jo and Cassiel are markedly distinct, and Holly is a worthy addition to their ranks. And as for Andrew, well, he’s unlike a character far removed from Djinn or mere human, and I can guarantee that romance readers will feel right at home with his charm.

I was most impressed with Ms. Caine’s take on witches and magic in this novella. The idea that witches possess hereditary gifts, and are only able to really practice in an extremely specialized niche is intriguing – especially concerning the actual physical acts of resurrection. Something else Ms. Caine writes exceptionally well is the actual visualization of magic. For example:

I parted his clay-cold lips and poured in the first, massive dose of the potion. It pooled in his mouth, liquid silver, and then I performed the part that nobody else could do.

I kissed him, very gently, on the lips and completed the last step of the preset spell. I felt a line of power spooling out of me, traveling through the dark and connecting, with a jolting snap of power, with the spirit of Andrew Toland.

And it only gets better from there.

Verdict: Strange Brew has another winner with this short story. Smart, engaging, sexy, “Death Warmed Over” is another solid entry from Rachel Caine.

Additional Thoughts: If you haven’t read either author’s books yet, you really need to get on board. 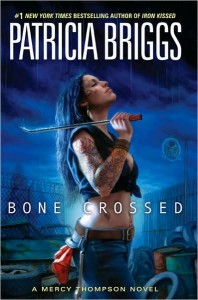 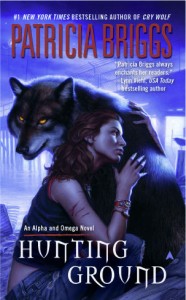 Patricia Briggs writes the Urban Fantasy Mercy Thompson series in the following order: Moon Called, Blood Bound, Iron Kissed and Bone Crossed. Book 5, titled Silver Bourne is out February 2010 (with two more books under contract). She also has another current Urban Fantasy series with a more romantic bend with the Alpha & Omega books, in the following order: “Alpha and Omega” (in the On the Prowl anthology) and Cry Wolf. Book 3 in the series, titled Hunting Ground is out next month (check out the first chapter online HERE). If that’s not enough Briggs for ya, her Mercy books have been turned into comic books by the Dabel Brothers – the first four issues are collected in the Homecoming storyarc, available in graphic novel form on August 25th. You can read more about Patty on her website, HERE. 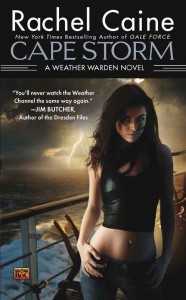 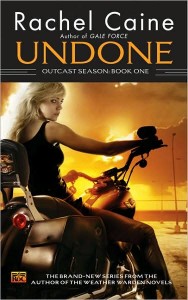 Rachel Caine is the author of the Weather Warden Urban Fantasy series, with books in the following order: Ill Wind, Heat Stroke, Chill Factor, Windfall, Firestorm, Thin Air, and Gale Force. Book 8, titled Cape Storm is out next month. She also has another series set in the same universe as her Warden books called Outcast Season, with one book published, Undone. She also writes a very popular YA series, the Morganville Vampires. For more info on Rachel Caine, check out her website HERE.