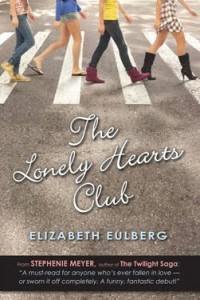 Why did I read the book: We were invited to be a part of the blog tour and we make a point to always read the book when we join a blog tour.

How did I get the book: ARC from the publisher

Summary: Penny is sick of boys and sick of dating. So she vows: no more. It’s a personal choice. . .and, of course, soon everyone wants to know about it. And a few other girls are inspired. A movement is born: The Lonely Hearts Club (named after the band from Sgt. Pepper). Penny is suddenly known for her nondating ways . . . which is too bad, because there’s this certain boy she can’t help but like. . . .

Penny Lane, the daughter of Beatles’ fanatics parents is sick and tired of boys. After having her heart broken by her childhood sweetheart, she decides to stop dating until she leaves high school and concentrate only on school and her girl friends. She creates The Lonely Hearts Club and as the lone member keeps it a secret for as long as she can. But soon enough word starts spreading at school and more and more girls who are having boy-troubles join the club starting a huge movement and Penny becomes a legend, creating a myriad of problems with boys, the principal and other girls.

What starts as a very teenage-y read (the first few chapters had little crossover appeal to me), soon proves to be much more. In a genre that is replete of relationship-centric stories in which the girl falls hard for the boy and forgets about everything else and never looks back, The Lonely Hearts Club provides a refreshing turn of events. It may start as very boy-centric but as the story and the characters evolve the book becomes a girl-centric, empowering read, the answer to my prayer for more strong female characters in YA.

The point that Penny and her friends want to make is that yes, at one time or another pretty much every girl forgets everything because of a boy. But what happens if the relationship does not work? Friendships have been ruined, school grades have fallen and there is a vacuum in their lives. With the Lonely Hearts Club they try to pre-empt that threat by sticking together, and prioritizing themselves over boys.

Right at the beginning of the story there is a very important event when two of the most popular kids in school, Diane and Ryan break up and Penny observes from afar how unfair it all seems with Ryan being hailed as The Guy as though breaking up was his choice and Diane being pitied as a victim; This, even when they broke up out of common accord and remained good friends. This critical perception of High School’s silly behavior is another great thread of the novel.

Actually, this is one of the great things about Lonely Hearts Club, the fact that I was surprised by certain choices the author made. Ryan and Diane’s relationship is a very interesting one. Having dated for 4 years, they become really good friends after breaking up, showing the respect they still had for each other. It could have been easy to have made a point of maligning one or the other or to make Diane a bitch seeing as how she used to be Penny’s best friend but disappeared once she started to date Ryan. But the author makes both characters flawed, fleshed out people; Diane especially is someone who made a mistake, regretted it and tried to atone for it. And both girls, Diane and Penny try really hard to make their friendship work again. Penny is also friends with Ryan and their budding relationship becomes a bit more, adding tension to the story: he has feelings for Penny and they are clear, but what happens to the Club then if all of a sudden the founder decides to break rule numero uno?

The eventual realization that maybe not all boys are the scum of the earth and that it is possible to have both: boyfriends and girlfriends and remain a centered person is a very healthy outcome and one that I loved.

On the down side, quite a few of the secondary characters are not really fleshed-out , which is not surprising seeing as how there were so many girls in the club. But there is one in particular that has an eating disorder and I think this is an important issue that deserved more than being merely glossed over. It also sort of bothered me, how peppy some of the meetings of the club were and everything that they did was an overwhelming success. I like the idea of empowering girls to the point where they work together towards common goal but not everything can be so easy as to simply rally people and voila, all is fine in the world. I find it a bit unrealistic.

Still, overall the story really works , with its focus on friendships. I loved Penny, Diane and Ryan as characters and all the references to the Beatles. I heard on the grapevine that the author sold rights to a movie and should it happen I predict a success – as far as I know, there isn’t a lot of stories centered around girls and their girls friends out there and the author certainly deserves kudos for it.

Notable Quotes -Parts: I absolutely LOVED this scene when Penny’s parents were called to the school because the principal had reservations about the Club and what is was doing to the school’s cliques:

“Mrs Bloom, I am not going to sit here and allow one girl to start running the school. Penny is getting way too much power at this school. Her influence with the female population is getting a little out of control.”
Mon started to tap her foot impatiently. “And I suppose you don’t have a problem with the fact that, just because some jock can throw a ball far, the entire male population worships him? Let me ask you a question, Mr Braddock. Have any of the Club members gotten in trouble for anything?”
“Well, technically no. But her little club is unsanctioned by the school, therefore – “
“Therefore,” Mom cut him off, “it really isn’t any of your business.”

The scene continues for about one page and by the end of it, I felt like giving standing ovation to Penny’s parents!

Additional Thoughts: I love The Beatles and it was great to see so many references. I found it was hilarious that Penny’s parents named their kids Penny Lane, Rita and Lucy and that they refused to see any cover bands of the group and their vacations were spent in Liverpool. Penny could have been a teenager that hated what her parents loved but she wasn’t: she respected their quirkiness and actually loved the Beatles as well. She says that the Beatles could have been her rebellion but they were her comfort. How cool is that?

And don’t you just love the Abbey Road-shout out cover? 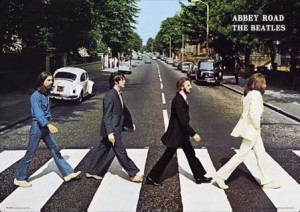 Verdict: The Lonely Hearts Club is a fun, relatable chick-lit YA, where boys are as important as girl friends and the Beatles still rule the world in the protagonist’s household.
Rating : 7 – Very Good

Reading next: An Abundance of Katherines by John Green.

Over at Kirkus: Under My Hat: Tales From the Cauldron edited by Jonathan Strahan