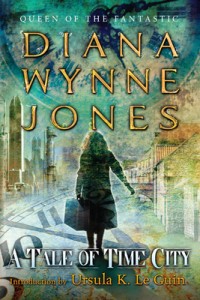 Title: A Tale of Time City

Time City is built on a patch of time and space outside history. It is full of wonders and haunted by “time ghosts,” but it is nearly worn out and doomed to destruction.

In September 1939, Vivian Smith is on a train, being evacuated from London, when she is kidnapped by two boys from Time City, Jonathan and Sam. They mistakenly think she is the mysterious Time Lady disguised as a child. Only the Time Lady can wake the founder of the city, Faber John, from his age-long sleep, and only he can save the city.

Vivian wants to get home; Jonathan and Sam want her to help them in their quest through the ages of history to save Time City. Meanwhile, someone seems to be tampering with history, changing it over and over, complicating everything. When Faber John is at last aroused, Time City’s and Vivian’s dilemmas are resolved in ways that are as satisfying as they are unexpected.

Why did I read this book: I love DWJ’s books and have been building a DWJ’s library little by little. I bought a A Tale of Time City recently and decided to read it now since I was in the mood for a Time Travel story.

I am slowly working my way through Diana Wynne Jones’ books. A Tale of Time City was originally published in 1987 and reissued this year with an introduction by Ursula Le Guinn (alas, my copy is an old one) and I decided to read this one next because I am going through an I Love Time Travel phase.

Time City is a place built on a patch of time and space and for all intents and purposes, outside history. Its inhabitants are Guardians and Observers who have recently started to realise that Time City is degenerating increasingly fast. No one knows what will happen to History once the city crumbles and only Faber John and the Time Lady, its mythical builders can possibly save it.

Two boys, Jonathan and Sam, eavesdrop on their family’s meetings and learn that the Time Lady has actually gone rogue and might be at the centre of Time City’s current problems. They travel back in time – in secret – to stop her. They end up kidnapping young Vivian Smith from September 1939 as she was being evacuated from London at the beginning of World War II. They mistakenly believe that she is the Time Lady in disguise but soon Vivian proves she is just a kid. Bent on returning to her own time, she doesn’t want to have anything to do with Jonathan and Sam but when she comes across her own “time ghost” (an spectral imprint that shows important moments of history and proves that Vivian has a key role to play) in Time City, she realises she can’t leave just yet.

In the meantime, History has started to go awry – WWII now starts in 1938! – and Jonathan, Sam and Vivian need to go back through time to stop those tampering with History.

A Tale of Time City is an adventurous, fun time travel story. Everything fits well and events unfold elegantly with twists that come left and right – as usual with these types of stories. I loved the main plotline, how it was constructed and deconstructed with the usual DWJ’s aplomb.

And as per usual with DWJ’s novels, even in the midst of plot shenanigans, bickering children and high adventures, there are those thought provoking questions woven into the story. For example, the difficult relationship between children and parents as well as the development of the friendship between Jonathan, Sam and Vivian. The three kids are awesome –especially Vivian, who as an outsider presents the story with the necessary critical eye. It is through her eyes that the actions of the inhabitants of Time City are questioned. It is through her eyes that we see how they deal with History with a scientific authority that is both awe-inspiring and uncomfortable. More often than not, they see the past of something that is not real with the hindsight that makes it easier for them to be completely detached. There is one scene when Vivian is holding the gas mask that all evacuees had to carry and someone says how “realistic” it looks to wit Vivian replies: “It’s not realistic, it is real.”

This interesting relationship with History and how distance turns it into something that some might address as less than real, is really well explored.

Another thing I loved about A Tale of Time City was how the questions of “names” and “identity” were incorporated into the story. As the book starts, Vivian stands in that train being evacuated from London, going away from her family and all that she knows and the only thought that crosses her mind is that she needs to keep her identity tag safe because:

“When your surname is Smith, you need to make very sure that everyone knows just which Smith you are”

Later on, there is an examination about the origins of the name Smith and the difference between “common” and “unique”. Not to mention, the very realisation that nothing could possibly be built outside history, not even Time City. It is very clever as usually this author’s books are.

Although not my favourite of DWJ’s novels, A Tale of Time City was definitely a vastly entertaining, engaging story which I highly recommend.

The train journey was horrible. There was a heat wave that September in 1939, and the railway authorities had fastened all the windows shut so that none of the children packed onto the train could fall out. There were several hundred of them, and nearly all of them screamed when they saw a cow. They were all being sent away from London from the bombing, and most of them had no idea where milk came from. Each child carried a square brown gas mask box. All of them had labels with their names and addresses on them, and the littlest ones (who cried and wet themselves rather often) had the labels tied round their necks with string.

Vivian, being one of the bigger ones, had her label tied to the string bag Mum had found to take the things that refused to fit into her suitcase. That meant that Vivian did not dare let go of the string bag. When your surname is Smith, you need to make very sure everyone knows just which Smith you are. Vivian had carefully written Cousin Marty’s name and address on the back of the label, to show that she was not just being sent into the country, like most of the children, to be taken in by anyone who would have her. Cousin Marty, after a long delay, had promised to meet the train and have Vivian to stay with her until the danger of bombs was over. But Vivian had never met Cousin Marty, and she was terrified that they would somehow miss each other. So she hung on to the string bag until its handles were wet with sweat and the plaited pattern was stamped in red on her hands.

Half of the children never stayed still for a moment. Sometimes the carriage where Vivian sat filled with smallboys in gray shorts, whose skinny legs were in thick gray socks and whose heads, each in a gray school cap, seemed too big for their bare, skinny necks. Sometimes a mob of little girls in dresses too long for them crowded in from the corridor. All of them screamed. There were always about three labels saying “Smith” on each fresh crowd. Vivian sat where she was and worried that Cousin Marty would meet the wrong Smith, or meet the wrong train, or that she herself would mistake someone else for Cousin Marty, or get adopted by someone who thought she had nowhere to go. She was afraid she would get out at the wrong station or find out that the train had taken her to Scotland instead of the West of England. Or she would get out, but Cousin Marty would not be there.

Reading Next: The Aviary by Kathleen O’Dell