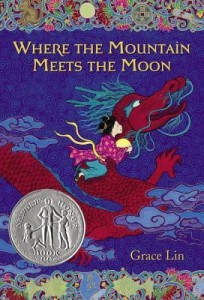 Title: Where the Mountain Meets the Moon

Grace Lin, author of the beloved Year of the Dog and Year of the Rat, returns with a wondrous story of happiness, family, and friendship. A fantasy crossed with Chinese folklore, Where the Mountain Meets the Moon is a timeless adventure story in the classic tradition of The Wizard of Oz.

In the Valley of Fruitless Mountain, a young girl named Minli spends her days working hard in the fields and her nights listening to her father spin fantastic tales about the Jade Dragon and the Old Man of the Moon. Minli’s mother, tired of their poor life, chides him for filling her head with nonsense. But Minli believes these enchanting stories and embarks on an extraordinary journey to find the Old Man of the Moon and ask him how her family can change their fortune. She encounters an assorted cast of characters and magical creatures along the way, including a dragon who accompanies her on her quest.

Why did I read this book: I am trying to read more diversely and this story is set in China, with Chinese characters, based on Chinese Folklore. This sounded just like the thing, and given its many awards, I thought it was also a sure thing. Not so much.

There is a small poor village in the valley at the foot of Fruitless Mountain where a young girl named Minli lives with her parents in a small makeshift hut where there is barely room for three people to sit around a table and not enough food to feed them properly. Their living condition is mirrored across this poor village where food is scarce, work is all they have and life is hard. But life goes on as it must and Minli finds great comfort in her father’s folktales, told every night (to her mother’s dismay and annoyance for what good do these tales do after all?). Those old stories speak of great adventures, extraordinary creatures like Dragons and important figures like the Old Man of the Moon, who knows the answer to every question. Inspired by her father’s stories and by her mother’s unhappiness, Minli sets out on a quest to find the Old Man of the Moon in order to ask him a most important question: how to change her family’s fortune. In her journey, she befriends a Dragon, listens to more incredible stories and encounters a wide variety of characters – from the very rich to the very poor.

There are many things I enjoyed about Where the Mountain Meets the Moon. The story is intricate with several layers of storytelling (with stories within stories) that at first appear random but combine in the end to form a whole picture. The main narrative focus shifts between Minli’s journey and her parents, left behind, worried sick about their daughter and going through some serious soul searching of their own and both threads are really interesting. The relationship that develops between Minli and Dragon is fun and sweet, the variety of characters presented – mythical or real – add a great additional flavour to the story. And I simply cannot argue against the essential idea that stories are important and even vital to people’s well being.

The writing is lovely and the book is interspersed with beautiful illustrations. I also loved reading this review by Jane at Dear Author who describes the experience of reading this book with her child.

Having said all that…

Watch me as I get all philosophical. Also: SPOILERS.

First of all: I would argue that the mother got the short end of the stick and I felt that was so unfair. It is proposed that it was her unhappiness and rancour that moves Minli to set out in her adventures. And in a great moment of soul searching the mother realises that she needs to change, that it is her fault that Minli left and that she can’t allow this bitterness to take over their lives. I appreciate the exploration of the idea about how a parent’s stance in life (happiness, unhappiness) can and will make an impact on a child’s well being. However, how can anyone begrudge a mother for being bitter and sad for not being able to feed her daughter properly? For being so dirty poor? That the father is hailed as a hero for being content and preferring to spend his life telling stories – not that there is nothing wrong with that – whereas the mother is vilified because she is aware of their crappy conditions and hates it, is I feel, utterly, utterly unfair.

But that fits with the overall message or lesson proposed in the story. You see, in the end Minli comes to realise that there are more important things in life than riches. That thankfulness, faith, family are worth more than gold. In the end, she does not ask the question to the Old Man of the Moon and she says:

“Why would we want to change our fortune?”

I mean, do I agree with the positive aspects of thankfulness, faith, resilience and family affection? Of course I do. There is nothing wrong about being content with what you have, and extreme want is undoubtedly the source of many evils in the world. But there is nothing wrong with ambition, with wanting to improve one’s life in material ways either. I think this message is pretty rotten actually, considering how there are children actually RIGHT NOW dying of hunger and please don’t tell me that being thankful and having faith are better than to want to change one’s fortune. They are not. There is no dignity in going hungry and no one should have to endure that.

Taking into consideration this is a book for children, I actually think this sends a harmful message. I think I would have been ok with the idea that thankfulness and faith might HELP changing one’s fortune; might help overcome anything that life throws at you – but as you can see from the above quote, it is not a case of wanting to change one’s fortune at all in the end.

This grieves me all the more when it comes to the climax point in the story, after Minli realises she has everything she wants, goes back home and is very fortunate to find a precious pearl that will effectively change her family’s fortune ANYWAY. The finding of the pearl is a mixture of luck as well as merit from being a good kid rather than actively doing something. You know what is worse? The family doesn’t even use the peal to improve their lives. They present it to the emperor who in turn is so thankful, he presents them with riches. How about them apples?

I have taken under consideration the fact that the author has attempted to create a tale with an authentic Chinese feel that follows traditional Chinese beliefs. Therefore, Where the Mountain Meets the Moon should be an accurate representation of historical folktales (although I can’t attest to any of these assertions since I am an outsider and do not want to be appropriative nor am I an expert in Chinese culture, tradition, or folklore). I can’t really say but even if it is, even if it does recreate traditional Chinese beliefs, I feel that I can still argue when it comes to the moral lesson proposed here and its philosophy. Especially considering that the story is 1) fantasy 2 ) written only a few of years ago therefore from a thoroughly modern perspective.

All that said, even though I enjoyed parts of Where the Mountain Meets the Moon a great deal, I felt discomfited by the message presented in the end which in turn, made me question the entire book.

Far away from here, following the Jade River, there was once a black mountain that cut into the sky like a jagged piece of rough metal. The villagers called it Fruitless Mountain because nothing grew on it and birds and animals did not rest there.
Crowded in the corner of where Fruitless Mountain and the Jade River met was a village that was a shade of faded brown. This was because the land around the village was hard and poor. To coax rice out of the stubborn land, the fields had to be flooded with water. The villagers had to tramp in the mud, bending and stooping and planting day after day. Working in the mud so much made it spread everywhere and the hot sun dried it onto their clothes and hair and homes. Over time, everything in the village had become the dull color of dried mud.

One of the houses in this village was so small that its wood boards, held together by the roof, made one think of a bunch of matches tied with a piece of twine. Inside, there was barely enough room for three people to sit around the table — which was lucky because only three people lived there. One of them was a young girl called Minli.
Minli was not brown and dull like the rest of the village. She had glossy black hair with pink cheeks, shining eyes always eager for adventure, and a fast smile that flashed from her face. When people saw her lively and impulsive spirit, they thought her name, which meant quick thinking, suited her well. “Too well,” her mother sighed, as Minli had a habit of quick acting as well.

Ma sighed a great deal, an impatient noise usually accompanied with a frown at their rough clothes, rundown house, or meager food. Minli could not remember a time when Ma did not sigh; it often made Minli wish she had been called a name that meant gold or fortune instead. Because Minli and her parents, like the village and the land around them, were very poor. They were barely able to harvest enough rice to feed themselves, and the only money in the house was two old copper coins that sat in a blue rice bowl with a white rabbit painted on it. The coins and the bowl belonged to Minli; they had been given to her when she was a baby, and she had had them for as long as she could remember.

What kept Minli from becoming dull and brown like the rest of the village were the stories her father told her every night at dinner. She glowed with such wonder and excitement that even Ma would smile, though she would shake her head at the same time. Ba seemed to drop his gray and work weariness — his black eyes sparkled like raindrops in the sun when he began a story.

Rating: I honestly do not know how to rate this. I was so let down by the message that it basically ruined the whole thing for me. I am going to cop-out and say: NO RATE

Reading Next: The Boneshaker by Kate Milford

From the Page to the Screen: I Am Legend