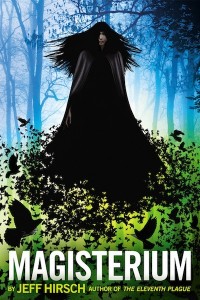 On one side of the Rift is a technological paradise without famine or want. On the other side is a mystery.

Sixteen-year-old Glenn Morgan has lived next to the Rift her entire life and has no idea of what might be on the other side of it. Glenn’s only friend, Kevin, insists the fence holds back a world of monsters and witchcraft, but magic isn’t for Glenn. She has enough problems with reality: Glenn’s mother disappeared when she was six, and soon after, she lost her scientist father to his all-consuming work on the mysterious Project. Glenn buries herself in her studies and dreams about the day she can escape. But when her father’s work leads to his arrest, he gives Glenn a simple metal bracelet that will send Glenn and Kevin on the run—with only one place to go.

With MAGISTERIUM, Jeff Hirsch brings us the story of a complex, captivating world that will leave readers breathless until the very last page.

Why did I read this book: I read and enjoyed Jeff Hirsch’s debut novel, The Eleventh Plague. Thus, when I saw news of this new dystopian SF novel, I was very interested to see how this new work would compare.

Glenn Morgan is a brilliant young woman, who desires nothing more than graduating early, and getting a ticket on a deep space exploration mission to a habitable planet far, far away. Ever since her mother chose to skip out on her daughter and husband, Glenn’s life has been a long, painful nightmare. Her father, once a brilliant, celebrated inventor has become a shade of his former self, obsessed with an all-consuming “project” that seems more the product of a delusional mind than fruitful scientific endeavor. The only things that keep Glenn sane are her academic ambitions and the not-always-welcome distraction of her best friend, Kevin Kapoor. Despite her father’s obsessions, everything in Glenn’s life seems to be according to plan – it’s only a matter of time before she gets to strike out in the great beyond and leave her world behind.

When Glenn’s father’s Project turns out to be successful, however, Glenn’s life is turned upside down – her father is imprisoned by the Authority, and Glenn and Kevin find themselves on the run. With an invention that could change everything, Glenn and Kevin cross the border separating their world, the Colloquium, from the terrifying wastes beyond. Together, Glenn and Kevin find that everything they know about their world is a carefully constructed lie, and that the Colloquium is just one paradigm in a universe with many different rules and possibilities.

Magisterium, the sophomore effort from Jeff Hirsch, takes a familiar baseline premise (parentless brilliant girl who has a secret destiny and who can change everything, set in a dystopian world) and embellishes it with some solid originality, making for an engaging, memorable read. This is a very different novel than The Eleventh Plague, as it certainly is more imaginative in scope, traversing two different worlds that abide by different universal laws. I love books that straddle and blur the lines between science and magic, and Magisterium does this with distinct aplomb (calling to mind Incarceron and Sapphique by Catherine Fisher). I especially loved the juxtaposition of the Colloquium and its adherence to order and technology, alongside the world of the Magisterium, full of human-like warrior creatures and natural magic. Of course, this rift between (manmade) Technology and (natural) Magic is a familiar tension, especially throughout YA SF/dystopias, Hirsch’s worlds are more…subtle. Less overt in their critiques and there isn’t the same absolute demonization of science that seems so prevalent in the works of this particular YA canon – and I greatly appreciate that. I *especially* love how Hirsch shows that both sides of this particular dichotomy have their own strengths and weaknesses, their own tyrants and heroes. Brilliant.

From a character perspective, the counterpoints of Glenn and Kevin are similarly brilliant and I loved both of these young, impassioned protagonists. Glenn clings to her desire for reason and order, while Kevin embraces the different other-ness of the world beyond the Colloquium. Most of all, I love the relationship between these two characters, and watching it slowly evolve the longer they are on their quest. For so long, Glen strives to push everyone away – especially Kevin – and she struggles to make sense of her own tangled emotions. I love that Kevin pushes back, too, and he’s not just some complacent, love-struck boy without any deeper characterization (he has a fantastic arc, and I found myself loving Kevin wholeheartedly). My favorite character, however, is the feline Aamon – but I don’t want to say TOO much about him, because when you discover who he is and why he befriends Glenn and Kevin, it’s a hell of a twist.

The only actual stumbling points for this book – at least for me – concerned the plot itself. From a storytelling perspective, I love the path that Magisterium takes, but the pacing is uneven, especially in the middle portion of the text. There are many wondrous sights and creatures in the Magistra’s realm, from beautiful jagged-toothed swan princesses and magic-weaving old ladies, but the introduction to these different friends and foes felt stilted and confusing, and aren’t actually necessary to the storyline or plot progression overall. Too, I wanted more meat and gristle when it came to the story behind the Rift that caused the divide between the two worlds, more concrete details in lieu of descriptive flair. That said, the flair is kind of fantastic, and I love the distinct flavor of Hirsch’s worlds – so I can’t complain too much.

For all the familiarity of the tropes in this book – and yes, they are bountiful as well as familiar – I very much loved Jeff Hirsch’s touches of originality and skillful imagination. Solidly recommended (and I cannot wait for Hirsch’s next book).

Glenn followed the hum of machinery out to the edge of the forest.

Balancing a tray in her hands, and her tablet under one arm,Glenn eased around a patch of snow stained blue from the lights of the generator that powered her father’s workshop.

Workshop was a grand term for what Dad had built in the back corner of their yard. Glenn had tried to tell him he should fab it —they had the money when he first built it. He said you couldn’t let machines do everything for you; sometimes you had to use your own two hands. Of course, what his own two hands got him was a leaky roof and walls that listed to one side as if they were caught in a perpetual hurricane. Inside, Dad was flat on his back, buried deep underneath the metal guts of “The Project,” a patched-together mix of the best tech their limited budget could afford, scrap metal, and whirring motors.

Glenn paused at the open door, the dinner plates rattling on the tray. She told herself it was stupid to be nervous, but the single form that sat on her tablet — nothing more than a few lines of text and her school’s seal — loomed in her mind. Getting it had taken an hour of tense consultations with teachers and administrators. Now all she needed was one more signature.

You can read the first 24 pages online HERE.

Reading Next: A Beautiful Friendship by David Weber