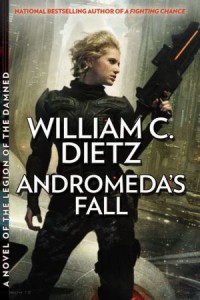 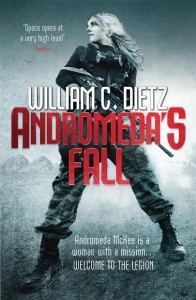 When a bloodthirsty power grab on Earth results in the murder of her entire family, wealthy socialite Cat Carletto is forced into hiding. On the run from the ruthless Empress Ophelia, and seeking revenge against the woman who destroyed her life, Cat enlists in the Legion an elite cyborg fighting force made up of society s most dangerous misfits. On the battlefield, Cat Carletto vanishes, and in her place stands Legion recruit Andromeda McKee. As she rises through the ranks, Andromeda has one mission: bring down Empress Ophelia or die trying.

Stand alone or series: Book 1 in the Prequel Legion Series

How did I get this book: Bought in the UK

Why did I read this book: I hadn’t seen or heard of this book until I stumbled across it on my recent trip to visit Ana in London (found this copy at Forbidden Planet, in case you were wondering). Immediately, I was hooked – female-centric military science fiction? Yes, please!

Centuries in the future, humanity has traveled across the galaxy and spread its roots across other planets and colonized alien worlds and peoples. The Imperial Planet Earth remains home to humankind and the central hub of political power as a home to the imperial family – including the Emperor Alfred Ordanus and his ambitious sister, Princess Ophelia. In a ruthless coup for power, Ophelia kills her brother, seizes the throne, and systematically has all of her dead brother’s supporters executed immediately. The powerful, beautiful, and glamorous socialite Lady Catherine “Cat” Carletto’s family is among the first to fall to Empress Ophelia’s purge – with luck and a fierce determination to survive, however, Cat is able to escape her assassins.

With nowhere else to turn, Cat enlists in the Legion – an elite fighting force of bio-bod and cyborg soldiers, all misfits with dark pasts. Here with the Legion, Cat becomes Andromeda McKee, aka the “Steel Bitch” whose quick thinking and fighting instincts earn her the loyalty of her fellow Legionaires as she rises through the ranks. Safety is shortlived, however, and McKee’s past catches up with her as the Empress’s emissaries hunt down those subjects who escaped the initial purge. The one thing McKee knows for certain is that she’s willing to fight, and will sacrifice everything to tear down the Empress and avenge her murdered friends and family.

I confess that this is the first book I’ve had the pleasure of reading from William C. Dietz, a prolific and established science fiction author. I must also confess that I didn’t know going into Andromeda’s Fall that it was the first book in a prequel series to an already established series of titles (the Legion of the Damned books). It turns out, however, that none of that mattered – because Andromeda’s Fall stands just fine on its own and, at least in this newbie’s opinion, seems to be a natural entry point to become acquainted with Dietz’s work.

Andromeda’s Fall is fun, fast-paced military science fiction – yeah, it might not be the deepest or most profound novel, but sometimes a girl wants explosions, action, and a bonafide badass protagonist. Especially on the protagonist front, Andromeda’s Fall delivers – I loved heroine Cat Carletto/Andromeda McKee (note: I think of her as McKee, not Cat, and will be addressing her as such throughout this review). While the initial introduction to Cat is a bit awkward (involving a scene in which she looks at herself in the mirror, reflecting on her goals in life), it becomes quickly evident that Cat has a strong will to survive and a deep vein of steel resolve. I also appreciate that Dietz doesn’t objectify his heroine, or any of his female characters, for that matter. Andromeda McKee is a fighter and a soldier – she isn’t sexually assaulted or threatened by her male cohorts, nor is her value or importance as a character reduced to a function of her physical appearance. Like any soldier, McKee has to prove her worth and fight her way to advance – and advance she does, because she’s smart, she trusts her instincts, and she earns the respect of her fellow soldiers.

Of course, on the negative side of this, McKee rises through the ranks very quickly and is bailed out of a few tough situations by happenstance. That said, I greatly appreciated that McKee isn’t an automatic badass, instantly beloved by all. The troubled relationships with her superior officers and subordinates (especially the bully Larkin) are genuine, and among my favorite moments in the book. McKee also faces some meaty moral dilemmas as the book progresses and the Legion’s soldiers are enlisted to fight for the Empire. Does McKee desert and help the rebels? Does she stay and compromise her safety and her own desire for retribution? Decisions, decisions.

In terms of writing style and plotting, Andromeda’s Fall has mixed results. The writing tends towards the stilted and utilitarian especially early on; I was leery of the many sentences that started: “Having ducked under the spray, Cat allowed the water to break over her head”” or “Having granted herself more freedom of movement, Cat approached the door.” Thankfully, Dietz’s strength is with his descriptions of weaponry, battle scenes, and action – and Andromeda’s Fall is all about the action. Once McKee joins the Legion, things pick up nicely following the basic plot tenets: enlistment, basic training, and eventual battle testing.

The main complaint I have for Andromeda’s Fall truly lies with other characterizations – beyond McKee (and even McKee to some extent), characters are broad archetypes without much further defining scope. The Evil Empress has sadly little screen time and we never know much about her motivations other than The Desire for POWER. McKee’s fellow Legionaires rotate into and out of the story quickly, with the only real regular faces being Larkin (the bully who becomes inseparable to McKee after she saves his life), and eventual love interest (in a refreshingly non-cheesy way) Avery. One of the other more interesting characters in the book is the ruthless AI Jivv, who is tasked with hunting and killing the Empress’s escaped purge victims – there’s a lot of potential to examine this type of superspy/soldier artificial intelligence that isn’t tapped in Andromeda’s Fall, but I’m hopeful we’ll learn more in the next book.

Though it’s not without its faults, Andromeda’s Fall is a fast, entertaining action ride of a novel, and I enjoyed it thoroughly. Recommended if you’re in the mood for some diverting, easily digestible, and archetypal military military scifi.

And with that, the ex–legionnaire used two blocks of wood to propel himself toward the open door. Moments later, Toshy was gone. He was, Cat knew, one of thousands of badly wounded veterans who had been handed a severance check and put on the street. In all likelihood, Toshy had been issued a pair of bionic legs, but lacking the means to maintain the prosthetics, had sold them to pay the rent or gambled them away. Of course, that was his fault, or so many people maintained, her uncle being a notable exception.

Cat stood, took a quick look around, and spotted a holo deck. Having closed the door into the hallway she went over to the player, slipped the chip into the slot, and touched a button. A cloud of confetti–like motes of light appeared, were attracted to each other, and combined to form a three–dimensional image.

The lighting was poor, as if her uncle had been forced to make the recording in a dark room, and there was a momentary buzzing sound as his face disintegrated and came back together again. “Cat . . . It’s me, Uncle Rex. I’m sorry, honey, but I have some very bad news for you. The emperor committed suicide. That’s what the vidnets say, but I don’t believe it. First, because Alfred was anything but suicidal, and second, because hundreds of his close friends and supporters have been killed during the last week.”

At that point Cat felt a sudden emptiness at the pit of her stomach. Because her parents fell into both categories. Friends and supporters.

“They were killed in air crashes, diving accidents, and house fires. And that’s what supposedly happened to your parents Cat . . . Except I was there. And before the house caught fire, a military transport lowered at least two dozen synths into the estate. And they killed everyone. Servants and family alike.

“So it’s clear that Princess O was behind it. Except that she’s the empress now, and judging from the way Alfred’s associates continue to drop left and right, she’s determined to purge anyone who might stand in her way. And that includes relatives who might want revenge. You and I are bound to be on that list, pumpkin. So listen carefully. Drop out. Hide as best you can. And don’t use your credit cards or try to contact any of the people you know. Because if you do, they will find you.”

There was a noise in the background at that point and, as Rex turned to look over his shoulder, Cat saw the gun in his hand. When he looked back there was concern in his eyes. “I’m sorry, Cat. So very sorry. Find a hole to hide in honey . . . And don’t ever come out.” The image broke into pieces at that point. They were sucked inwards and disappeared.

There was so much to absorb, so much to accept, that Cat was numb. Then, as the full weight of her uncle’s words began to sink in, she started to cry. Deep sobs racked her body, and her stomach hurt as she rocked back and forth. Her mother. Her father. Both dead. It seemed impossible. Yet there it was, and having seen the look on her uncle’s face, she knew it was true.

Reading Next: Zahrah the Windseeker by Nnedi Okorafor