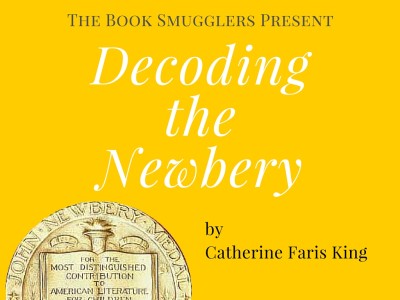 Decoding the Newbery is a monthly column in which Newbery Medal winners are examined and deconstructed by regular contributor and author Catherine Faris King. This month, Catherine examines the most recent winner. 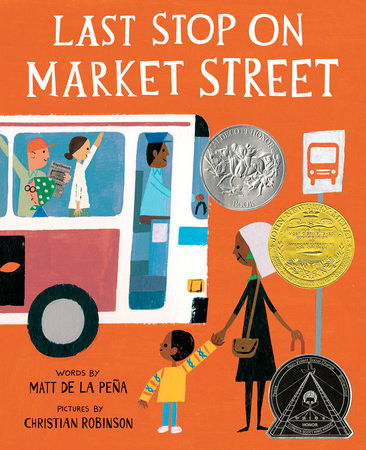 “CJ wondered how his nana always found beautiful where he never even thought to look.” – Last Stop on Market Street

It has been a long journey on Decoding the Newbery. What started on the basketball court took a leap into deep history. With Henrik Willem Van Loon, we viewed the farthest reaches of Europe from a Dutch belltower. We sailed to Chongqing on the Upper Yangtze, and then to an engineer’s never-never-land in the South Pacific. Then we ran aground on the dull shores of Connecticut at the start of the American Experiment: with the Murry and O’Keefe family we were whisked to the farthest reaches of the galaxy. Safe at home, a girl named Leslie showed the magic that can lurk in the smallest, dustiest American towns. Readers climbed the topless towers of Damar, and explored a greyscale Community at the ground level. We journeyed into medieval England, a realm both foreign and familiar.

And now we end our journey in an unnamed city, accompanying a little boy, CJ, and his grandmother. They are going to a soup kitchen at the end of Market Street.

Last Stop on Market Street is a wonderful book, but it is definitely not what I expected the committee to reward for 2016. It is a picture book for very young readers. Matt de la Peña provided the words, and Christian Robinson furnished the illustrations. Last year’s winner, The Crossover, was intended for the older end of the Newbery age range – around 13 or 14. It used an unorthodox, sophisticated style to communicate a mature theme, built around the interior life of a family. But Market Street is a journey, literally, from Point A to Point B. Its writing and illustration are exemplary and straightforward. And it is built around a message that Good Feels Good.

Before I go any further, let’s break the story down, one last time.

A little boy named CJ and his Nana ride the bus. Riding downtown is their habit on Sunday after church, but today CJ, our Kid Hero, is restless. He wonders why his family doesn’t have a car, why he can’t just go home and play. CJ asks Nana one question after another, but she always has an answer ready, in true Wise Soul tradition.

Nobody dies at the end of this book.

CJ observes and interacts with the other people on the bus. The bus driver greets him with a little magic trick, he meets a blind man with a guide dog, and he listens to a guitarist strumming away. By the time CJ and Nana reach their destination, he feels happy again and is ready to get to work at the soup kitchen. The people there are his friends. As the book ends, a rainbow shines over the city.

I do not know why the Newbery Committee chose this book. This is an unusual choice. Every other Newbery winning that I have ever read has had chapters, even those directed at younger readers, for example, Sarah, Plain and Tall. In recent years it seemed like the Newbery has been trending – in general – towards junior high readers, closer to fourteen than four.

That said, I think that Last Stop on Market Street is an excellent book. I would happily recommend it to anyone seeking a book for first-graders. Moreover, this book is a very important one, aptly suited to this moment in America. Without being heavy-handed or preachy, Peña and Robinson have made a story with a strong moral conscience. CJ learns: Different people understand the world in different ways. CJ learns: even an ordinary day can be full of surprises. CJ learns: Fiscal poverty doesn’t mean spiritual poverty. CJ learns: doing good brings its own reward, and that reward isn’t self-righteousness, nor is it perks in the Afterlife. Doing good rewards you by giving a chance to connect and make friends with the people you help.

Why do I say that this is an important book for America today?

About fifty million United States residents live in poverty, according to NPR (data from 2013). Another five million manage to avoid poverty by using food stamps. As a nation, we have not done a very good job of caring for the neediest among us.

In America you’ll find a hurtful strain of thought that turns the unfortunate into fictitious monsters: lazy bums, anchor babies, welfare queens. It’s not the government’s job to help them, the thinking goes. They don’t deserve it. They should be abandoned to their fates.

Even politicians who are in favor of welfare might become patronizing. Too much time cocooned in one’s own privilege can result in seeing “the poor” as a miserable mass that needs saving from themselves.

That’s not as bad, but it’s still nonsense.

Kit Tyler, of Blackbird Pond, would have told CJ that even in the most severe of societies, nobody’s worth is tied to their “usefulness.” Everyone has a history.

Sometimes people are bowled over by circumstances beyond their control, and the system can be unforgiving to those who fail to fit in it. That was true for the speakers in Good Masters, Sweet Ladies, and it’s true today. Some people – like Young Fu and his mother – can make a new beginning out of a tragedy, but Young Fu learns that his security is precarious, even in the great city of Chongqing. Even the most privileged people – such as Aerin-sol – can suffer from depression and illness.

So knowing all this, what do you do?

An engaged citizen of the world must be compassionate to all people, and the only way to do that is to live with them – to paraphrase Avatar: The Last Airbender. Young as he is, CJ is already learning the truth of that phrase. Working at the soup kitchen and talking to the blind man as an equal are Nana’s way of teaching CJ to see people as people, not as stock figures or case studies. Unlikely as it may seem, befriending them offers life and beauty to CJ’s world.

“Handle with care,” advises the king of Terabithia.

And that’s it for Decoding the Newbery. Thank you for reading along with me.