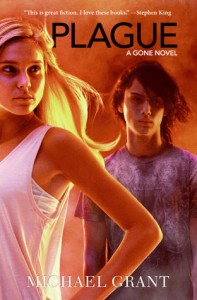 It’s been eight months since all the adults disappeared. GONE.

They’ve survived hunger. They’ve survived lies. But the stakes keep rising, and the dystopian horror keeps building. Yet despite the simmering unrest left behind by so many battles, power struggles, and angry divides, there is a momentary calm in Perdido Beach.

But enemies in the FAYZ don’t just fade away, and in the quiet, deadly things are stirring, mutating, and finding their way free. The Darkness has found its way into the mind of its Nemesis at last and is controlling it through a haze of delirium and confusion. A highly contagious, fatal illness spreads at an alarming rate. Sinister, predatory insects terrorize Perdido Beach. And Sam, Astrid, Diana, and Caine are plagued by a growing doubt that they’ll escape – or even survive – life in the FAYZ. With so much turmoil surrounding them, what desperate choices will they make when it comes to saving themselves and those they love?

Stand alone or series: Book 4 in the ongoing GONE series

Why did I read this book: The GONE books are some of the darkest, most violent, deliciously horrific and provoking dystopian series’ out there. Since I was introduced to Michael Grant’s Stephen King-esque work, his novels have consistently made my top 10 favorite reads of the year of their publication. Needless to say, I was ridiculously excited to read Plague.

**WARNING! THIS REVIEW CONTAINS UNAVOIDABLE SPOILERS FOR THE FIRST THREE BOOKS IN THE SERIES. If you haven’t read the prior GONE books and do not wish to be spoiled, you’d best be lookin’ away.**

Life in the Fallout Alley Youth Zone – or The FAYZ – is not easy for the teens and children trapped inside, cut off from the outside world and encased in a tiny, psychically-barricaded bubble. In the eight months of the FAYZ’s existence, the children of Perdido Beach have survived the initial disappearance of adults, the terrifying Darkness, gnawing hunger, sickness, and each other – but the worst is yet to come. With the gaiaphage trapped and buried in a sealed mine, Caine and Diana exiled to an island, and the Drake/Brittney creature imprisoned and under guard, things seem like they should be getting better for Sam, Astrid and the rest of the Perdido crew. But…this is the FAYZ after all, and nothing is ever quite so simple. Sam and Astrid’s relationship is on the rocks. Fresh water is running out. A fatal superflu blows its way through the population, leaving broken, dead children in its wake. A scourge of parasitic insects begin to worm their way into the population, too, literally eating their human hosts from the inside out – and like the flu, the parasites are immune to the powers of the “freaks” in Perdido Beach. And, most terrifyingly of all, while Little Pete lies trapped in a coma, the Darkness, the being called the gaiaphage stirs, beckoning its servants to heed its call.

Plague, the fourth of the GONE books is easily the darkest entry in the series to date – and not just in terms of gore (although it is rather gory with it’s horrific parasites and immortal, un-killable enemies that are able to reassemble themselves through even the most gruesome decapitations). While the series began with a more simplistic, polarized view of morality (which actually fits in very well with the innocence of the protagonists at that point in the storyarc), Plague is unflinchingly, unyieldingly brutal, forcing its characters to not only compromise their core beliefs, but to confront to some very nasty truths about themselves. Not only does Sam have to grapple with his hero complex and ineffectual leadership skills, but Astrid must confront the set of morals and religion to which she clings so desperately; Diana throws her own final ultimatum to Caine; Edilio searches for the real reason why he’s appointed leader; Lana fights with her brush with Darkness and the attentions of a newcomer to the beach; Brittney and Drake lock in an unending, unendurable battle between each other, trapped in the same flesh, fighting for consciousness. I’m also happy to see that in the midst of the death and brutality, Mr. Grant doesn’t shy away from the more…hormonal aspects of teenage life in a world without parents or rules. These teens don’t only have superpowers and weaponry, but they also drink, and screw, and grapple with emotions and relationships and gossip. That’s cool. I like that.

Of course, the action, danger, blood, and mystery is the biggest draw to this series (at least it is for me) – and in this respect, Plague delivers in spades. This newest installment reminded me of Lost, cross pollinated with John Carpenter/David Cronenberg, and related in the tradition of Stephen King. There’s the same huge, multi-perspective cast and multiple storylines (ultimately converging in a morass of action and violence) and the same eerie unsettling suspense – just what is going on in Perdido Beach? What exactly is the Darkness, or Gaiaphage, and why are these new indestructible creatures appearing? Like Lost, each new book in this series is a new layer; a previously unseen level to what is turning out to be an incredibly complex and terrifying story. And, I’m happy to say that unlike Lost, Plague actually does begin to answer some of the questions that have been piling up since the first book. Granted, the explanations probably aren’t going to fly with everyone – but for tried and true genre fans that know their King (et al), I have no doubts that you folks will take just as much glee in the book’s revelations as I did.

I loved the new introductions in this book and the brutality, as well as the expansion of the Perdido Beach camp to possible new locations.[1. Again, sorry to keep bringing this up but this is soooo Lost!!! What with Sam leading a group of FAYZies, Jack-style, to a more secure location, while others choose to remain on the beach. This makes me happy. I heart Lost and I miss it so very much.] The only disappointments I have with the book is with my impatience for more content with less filler. Not that Plague is a placeholder novel, but I want to see the overall storyarc continue to progress, and I want all our FAYZies to have an endgame in sight that doesn’t go the way of the aforementioned Lost, with answers being invented piecemeal or character development traded for pregnancy storylines and melodrama. I’m not saying Plague did any of these things – but the cynic (and Lost fan in me) has to be wary of these possibilities. These fears stated, I’m pretty sure Michael Grant won’t let fans down – because Plague was freaking awesome. I cannot wait for Fear, due out in 2012.

Notable Quotes/Parts: You can read the first 100 pages of Plague online using HarperCollins’s Browse Inside feature accessible via this link, or widget below:

Reading Next: The Wikkeling by Steven Arntson