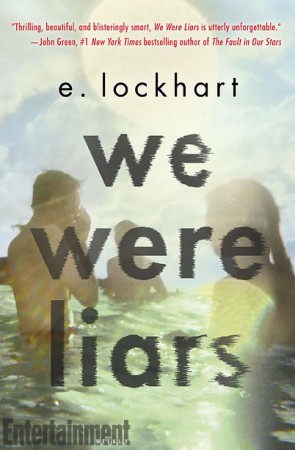 Title: We Were Liars

A beautiful and distinguished family.
A private island.
A brilliant, damaged girl; a passionate, political boy.
A group of four friends—the Liars—whose friendship turns destructive.
A revolution. An accident. A secret.
Lies upon lies.
True love.
The truth.

We Were Liars is a modern, sophisticated suspense novel from National Book Award finalist and Printz Award honoree E. Lockhart.
Read it.
And if anyone asks you how it ends, just LIE.

Why did I read this book: First of all, The Disreputable History of Frankie Landau-Banks by this author is a favourite book of mine. Then there was the hype surrounding this book! The Twist! Was Amazing! and also the comparisons to Liar (another fave) by Justine Larbalestier. How could I NOT read it?

I am ambivalent about We Were Liars.

The first thing you see when you open the ARC is a letter of introduction from the publisher telling us what the book is about and asking the reader not to spoil it for the people who haven’t read it yet. Plus:

“And if anyone asks how it ends, just LIE.”

It’s interesting how this letter serves to direct the conversation to this one side of the story that to me, is the least interesting part of the book. I’ve seen so many reviews that concentrate on that – on whether the ending and The Twist “worked” or not, or how it was mind-blowing, etc.

The Twist is surprising. And mind-blowing. And I never saw it coming (even though the clues were all there in the preceding chapters when you go back to re-read). But The Twist is a mere droplet of water in an ocean of things to talk about.

My own immediate reading tells me that this is a book about privilege. Or more to the point: the examination of privilege.

The Sinclairs: an Old Traditional Rich Family that live on a private island off the coast of Massachusetts – at least in the summertime. All Sinclairs are beautiful, athletic and rich.

They want you to think that they are not criminals, drug addicts or failures. That they have no problems and that everybody loves each other. Those are lies: for the Sinclairs have successfully (and carefully) built personas – both public and private. They don’t talk about things that are sad. The patriarch rules the family. The three daughters are at his feet, hoping to one day inherit the fortune. Everybody – including themselves – wants to believe the Sinclairs to be as perfect as they seem to be.

The Liars: are the oldest grandchildren. The narrator Cady, her cousins Mirren and Johnny. Plus Gat, an outsider, the nephew of one of the aunt’s boyfriend and the guy Cady falls in love with. We never really learn why they are called liars, by the way.

The story is narrated by seventeen year-old Cady who is an utterly unreliable narrator. She has amnesia after a terrible accident when she was fifteen – an accident that has fundamentally changed her. Cady’s attempt to remember the events that led to her accident drives most of the narrative when she returns to the island after a long absence. But there are also meandering moments in which she thinks about her family, the long-lost summertimes of her idyllic childhood. There are added “Once Upon a Time” interjections examining the lives of the Sinclairs that work well to introduce an element of timelessness and historical background to the dynamics surrounding the family and to make a firm statement about how Cady is reinventing herself after losing so much of her own memories.

This book is soaked in privilege. It’s difficult for me to really care about a story where most of these incredibly beautiful, rich, healthy, white characters sit around complaining how hard their lives are when they are in fact, sitting around in their beautiful private island, drinking incredibly expensive wine, eating posh food, prepared and served by their invisible help.

But this is The Point. Here is a book that examines this impossible lifestyle, that shows very clearly how isolated, insulated, apart from the world they are, without even knowing it.

I was going to add “unreal” to the list above. But there is nothing unreal about the Sinclairs. This is a very real example of privilege. It is above all, their reality. This is also The Point. Unexamined privilege is hurtful in very, very real ways.

The narrative itself is also dripping with privilege. It’s all from Cady’s point of view after all and she is immersed in this world. She is one of the Sinclairs. Her viewpoint and therefore ours are thus, restricted by who she is. Or who she remembers being.

Which sounds puerile to the extreme and naïve and like, Humanity 101. But this comes across to Cady as a Revelation. I was then reminded of the characters’ youth. And how they are all tragically swimming in privilege without even knowing it.

The narrative is carefully constructed toward its momentous ending. I have no qualms about the effectiveness of the plot and the storytelling. It is also beautiful narrated by Cady. Her idyllic summers with her cousins are almost palpable in the way that they are described: the lazing about, the talking about their feelings and hopes for the future as well as Cady’s need for communion and connection.

But there is also a lot of telling, little showing. It’s hard to care about those characters at all, they are almost cardboard characters. We hardly know anything about them beyond Cady’s descriptions that are more proclamations than actual portrayal. We hardly see the characters being any of those things: Johnny is “bounce, effort and snark”; Mirren is “sugar, curiosity and rain”; Gat is “ambition and strong coffee.”

That said, I go back to the fact that we are so restricted by Cady’s viewpoint. She did not really know who they really were either. I admire the author’s commitment to taking her narrator all the way even if it kind of backfires.

But the fact remains that without that level of communion between me, the reader, and those characters, the grand finale felt underwhelming.

I think part of what makes me so ambivalent about the book is that I was left with the impression that “what happens in the end” also matters very little. Has changed very little. It is a tragedy that is confined. The Sinclairs will remain. Will continue as they have always done. Cady will go on with her guilt and grief which are terrible things indeed but without suffering any real-world consequences for the very real thing she did. So in a way the book goes nowhere, moves no further than its opening. It’s restricted, it’s history repeating itself, it’s the cycle of privilege continuing. You don’t stop being privileged just because you know you are privileged.

Perhaps this is exactly what it is supposed to be. And THAT’S the true twist, the biggest tragedy and the most horrifying thing about We Were Liars.

I get that Cady is not supposed to be a likeable, sympathetic character. But I feel the narrative in its final chapter, wants us to understand her pain and to overlook the fact that her privilege will let her pretty much get away. That all is forgiven and forgotten. To feel for the poor little rich, privileged kids.

But this routine is one I am so sick and tired of. I don’t really care.

Part of me believes the book is too ambitious and ultimately fails in what it set out to do.

Part of me believes the book is too ambitious and succeeds beautifully in what it set out to do.

I said I was ambivalent about it.

WELCOME TO THE beautiful Sinclair family.

The Sinclairs are athletic, tall, and handsome. We are old- money Democrats. Our smiles are wide, our chins square, and our tennis serves aggressive.

So much
in love
that equally desperate measures
must be taken.

We live, at least in the summertime, on a private island o? the coast of Massachusetts.

Perhaps that is all you need to know.

Reading Next: A Creature of Moonlight by Rebecca Hahn