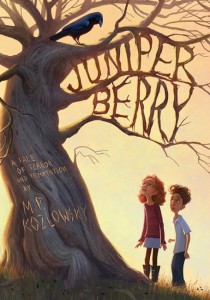 Juniper Berry’s parents are the most beloved actor and actress in the world—but Juniper can’t help but feel they haven’t been quite right lately. And she and her friend Giles are determined to find out why.

On a cold and rainy night, Juniper follows her parents as they sneak out of the house and enter the woods. What she discovers is an underworld filled with contradictions: one that is terrifying and enticing, lorded over by a creature both sinister and seductive, who can sell you all the world’s secrets bound in a balloon. For the first time, Juniper and Giles have a choice to make. And it will be up to them to confront their own fears in order to save the ones who couldn’t.

M.P. Kozlowsky’s debut is a modern-day fairy tale of terror, temptation, and ways in which it is our choices that make us who we are.

Why did I read this book: I have to be completely honest – it was the cover that caught my eye. I saw an ad for Juniper Berry online and thought, wow, that’s some awesome artwork – and that prompted me to investigate further. From the tagline itself, “A Tale of Terror and Temptation,” I was hooked.

The house was a mansion, the lake was a pool, Kitty was a dog, and Juniper Berry was an eleven-year-old girl.

That sweet, charmingly clever line opens M.P. Kozlowski’s delectable debut novel, a darker modern fairy tale filled with promise. Young Juniper Berry is a lonely but rather optimistic and imaginative young girl. The daughter of two world-famous movie stars, Juniper remembers a time when her mother and father were dotingly affectionate towards each other and to their only child, though lately they’ve been so consumed with their work that Juniper has been neglected and left to fend for herself. Shut away from the world in a huge secluded mansion and tutored at home, Juniper has no real contact with the outside world. So, instead, she becomes an observer and relies on her trusty binoculars and telescope to see the things around her, even if she cannot be a part of them. One day when exploring the woods surrounding her home, Juniper runs into a lonely, ostracized boy named Giles who is tormented at school because of his small size and weakness. The two become fast friends, though, and forge a strong connection when Giles tells Juniper that something is not right with his parents. Just like Juniper, Giles’s family has gone strange, becoming more aloof with each passing day. Although Juniper thinks that it’s just because both of their sets of parents are famous and important, she begins to notice that her mother and father’s behavior starts to change from mildly dismissive and preoccupied to manic and terrifying.

The children know that a darker, more sinister force is at work – and that a strange, horrible gnarled tree in the woods is the root of the sickness that has corrupted their families. It is up to Juniper and Giles to discover the truth and to help save their homes before it is too late…that is, if they can resist the sweet temptations placed in their path and avoid their parents’ fates.

Juniper Berry is, at its heart, a darker reimagined fable that plays with familiar themes – the taint of temptation, Faustian bargains, and the importance of being true to oneself. The most immediate, unavoidable comparison that springs to mind when reading this novel is, of course, Neil Gaiman’s Coraline. In many ways Mr. Kozlowski’s debut is reminiscent of that children’s novel-cum-film, starring an isolated and headstrong young female protagonist, dismissive parents (that soon are in mortal peril and need saving), and a dark evil that yearns to tempt our intrepid heroine away from that which is Truly Important. From the illustrations (which are excellent and evocative of Dave McKean’s work) to the whimsical voice, Mr. Kozlowski’s book feels very similar in tone and form to Gaiman’s. I mean this in the best way – for an author to capture that same sort of whimsy married to a sense of impending dread is no small feat. The similarities, however, are also potentially problematic in that no one – no one – can really go toe to toe with Neil Gaiman and emerge unscathed (let’s just say that in direct comparison, Juniper Berry will always play second-string to Coraline‘s quarterback). For someone that has read (and loved) books like Coraline (or even The Graveyard Book), it’s impossible to frame Juniper Berry without these comparisons in mind.

BUT! All of that said, taking Juniper Berry completely on its own merit, I cannot deny that this is one solid debut novel. I loved the creepiness of the story and the imagery Mr. Kozlowski employs, with a sinister tree in the woods, leading to an even more sinister force within.[1. And also, balloons are crazy scary. They’ve been scary since I first read/saw It, and now I have a new reason to fear them.] I’m also a sucker for the intrepid young heroine that must save her parents storyline, and I loved young Juniper from the start. Brave, intelligent, but hardly infallible, Juniper faces temptation in this book and could so easily have succumbed to it. Also, Mr. Kozlowski has a nice knack for description and setting, and manages to convey the creepiness of Juniper’s story without being gratuitous or too scary. In his guest post for us, Mr. Kozlowski ponders the rare book or work of art that can appeal to both children, but hold a deeper meaning for adults, and in this respect, Juniper Berry definitely fits the bill.

The book is not without its flaws, however, as there were two main issues (at least for me). First, Juniper’s voice is a little inconsistent, as she sometimes doesn’t sound like an eleven-year-old girl; though she may act like one and speak like one, the internal/omniscient narrative at times sounds inauthentic and very much like an adult writing a child. The other main issue was with the more heavy-handed thematic aspect of the story – because while Juniper Berry teaches an important lesson, it also verges on preachy/cheesiness by its conclusion. Any time a character has to explain and verbally speak a moral for a story, it’s a bit of a turnoff (at least for me as a reader). We’re smart (even – rather, especially – younger readers). We can figure out the moral of a story without it being explicitly spelled out for us.

Although Juniper Berry falls a bit on the heavy-handed side of the morality spectrum and does have some voice inconsistency, Mr. Kozlowski’s imagery and imaginative story are more than enough to make up for those flaws. Juniper Berry is a solid debut novel that is both horrific and heartwarming at the same time, and I absolutely recommend it for all ages.

The house was a mansion, the lake was a pool, Kitty was a dog, and Juniper Berry was an eleven-year-old girl.

And like many eleven-year-old girls, she couldn’t wait until her parents returned home from work. She sat at the top of the stairs, binoculars in hand and directed out the two-story front window, waiting to see the golden gates of her home slowly open. Tonight was Italian night and the three of them were supposed to make pizzas for dinner. This was part of their weekly schedule, only Juniper couldn’t remember the last time they actually followed through with it. For a while now, everything, including her, had been neglected. Still, she never gave up hope. One of these days her parents would come home from work and be thrilled to see her. The rest of the day and every day after would be spent in each other’s company, not a minute wasted, not even a single second, just like it was years ago.

Juniper was an only child, a lonely child, mostly because her parents were adamant to keep things that way. Mr. and Mrs. Berry were very famous. They were movie stars in every sense, paid a pretty penny (plus back-end percentages) to grace the screen in summer blockbusters and year-end award fare alike. Respected, admired, even loved by peers and fans, they were unceasing fodder for the gossip columns and recognized the world over. Hence the mansion, with its gates, its seclusion.

Juniper just never thought she would be kept out as well. But indeed, everything was at a distance. The world outside might as well have been the moon or Mars or the event horizon of the blackest of black holes. She had, by now, grown accustomed to her isolation, carrying her binoculars everywhere, spying from afar, searching for what she was missing. There was a telescope on a tripod in her bedroom, a monocular of some age that she always kept tucked away in a convenient pocket, goggles for underwater adventuring, a microscope and magnifying glass for that world even smaller than hers. Discovery and exploration were her salvation; if she couldn’t go out into the world, she could bring the world to her: the stars, the insects, the unsuspecting distance. Everything but her parents.

Today, however, was going to be different. She just felt it. She had it all planned out, from the moment they walked in the door until the second she fell asleep. It would go exactly like it did before they were famous.

Additional Thoughts: As I mentioned before, Juniper Berry also happens to be an illustrated book, with some gorgeous artwork: 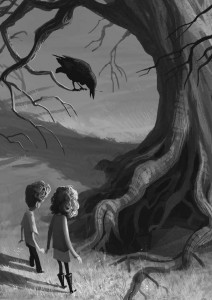 Also, we have author M.P. Kozlowski over for a guest post today and a giveaway opportunity of the book! Make sure to stop by and enter the contest.

Book Review: In A Handful of Dust by Mindy McGinnis