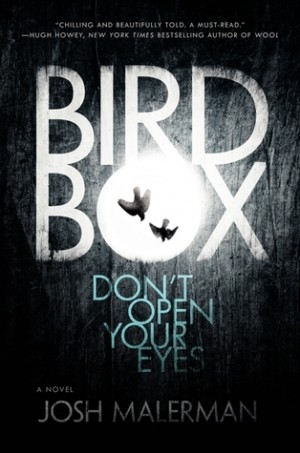 Most people ignored the outrageous reports on the news.

Then the Internet died. The television and radio went silent.

And we couldn’t look outside anymore.

Malorie raises the children the only way she can; indoors.

The house is quiet. The doors are locked, the curtains are closed, mattresses are nailed over the windows.

They are out there. She might let them in.

The children sleep in the bedroom across the hall.

Today they must leave the house. Today they will risk everything.

How did I get this book: Bought (UK edition)

Why did I read this book: I love horror novels and vow to read and review more of them in 2014. When I was recently in the UK and saw the gorgeous hardcover copy of Bird Box, I purchased it immediately.

Malorie lives in a world of darkness.

It has been nearly five years since the world ended. At first, there were just rumors and scattered reports about people doing unimaginable things to themselves. Soon, the scattered reports became more frequent, and hysteria spreads throughout Malorie’s hometown. People don’t know what exactly causes people to snap and kill themselves in such horrific ways…just that it is something they see. To protect themselves, people start putting blankets and coverings over their windows, boarding themselves indoors, and wear thick glasses, helmets and blindfolds when they dare venture outside.

For the newly (and accidentally) pregnant Malorie, the mounting fear and death take their toll on her family, leaving her utterly alone. With nowhere else to turn, Malorie takes a chance on an ad she saw in the paper and drives out to a house offering sanctuary to anyone who needs it.

Here, she will find friendship and hope, but also great sorrow and despair as the world goes mad.

Bird Box is a horror novel that is equal parts psychological and supernatural (although we never actually get to see the unfathomable thing that tears one’s mind apart). The debut novel from musician and author Josh Malerman, Bird Box is a competent, engaging book about the nature of fear, especially fear of the unseen thing that lurks at the corner of one’s vision. It’s this core idea – the unfathomable, psyche-shattering creature – that is so compelling, so frightening, and what makes Bird Box work. I’ve always been a fan of the “fear itself” horror trope, and am a firm believer in the value of terror in what is left unsaid and unseen (as opposed to copious amounts of cheap thrills and shock scares). Plus, this cruel and simple premise – DON’T LOOK! Or else! – is so effective because it’s nearly impossible to obey; human instinct to look, even if you know what you will see will destroy you. Malerman understands this instinct very well, and he delivers on this score. Big time.

Also on the positive side, I love the narrative technique of the book and the way Malorie’s story unfolds. The book begins, you see, in the ruined world – Malorie guides her two four-year-old children, whom she refers to simply as Boy and Girl, on a last desperate stand as they leave the safety of their home blindfolded and take to the river. As Malorie guides her family on this harrowing journey into the unknown, the narrative flashes back in time five years, as she recounts the events leading up to her present desperate situation. In these dual storylines, past and present, we witness the hysteria that takes over the world, and the fate of Malorie’s companions; from the onset of the book, and their absence in the “present” storyline, you know that everyone in Malorie’s past is basically doomed. This combination of sad inevitability for Malorie’s past, but hope for Malorie’s future is a well-balanced blend, and Malerman manages to pull it off beautifully, without causing any foreshadowing hokinesss or flashback frustration.

A large part of the narrative success also rests with the characterization of Bird Box‘s protagonist, Malorie herself. As much as I am loathe to use the reductive adjective, Malorie is an exemplary pillar of strength. The world is ending and she discovers that she is pregnant (the product of an unapologetic one night stand, thank you very much) – but Malorie does not despair, or blame herself, or her children. She accepts the situation and does everything in her power to provide her children with the best possible chance of survival – even if the lessons she must give her children are incredibly hard and their “present” storyline is rather grim. Malorie’s past storyline is also one intimately acquainted with loss and pain: she is the last survivor of her sister, her parents, her new housemates and friends. Knowing that inevitable outcome, knowing just how deadly and hopeless the situation is with these unseen creatures that inspire absolute death, Malorie’s decision to leave the relative safety of her home and look for a better life is incredibly brave and admirable.

On the negative side, however, there’s only so much room for depth in Bird Box – while I enjoyed the central premise of the book, it’s also basically the exact plot of that terrible M. Night Shyamalan movie The Happening. Minus the red tide/environmental explanation (this involves something more insidious and based purely on vision). Similarly, there’s a really easy answer to surviving this particular horror, which is eventually addressed very late in the book – if you cannot see the creatures, you live. There is no other condition. This means that the visually impaired population should be completely safe, beyond the harm of these creatures. It also means that there’s a relatively simple solution to the death posed by the creatures – I wish that there was a little more time spent on the reaction and evaluation of this solution. And I can’t help but think: how much more interesting and meaningful would this story have been if narrated through the perspective of someone blind? The problems that so many of the characters struggle with in Bird Box are rooted in the assumption that everyone can see, and the lack of sight would be a completely debilitating loss; that it would be impossible for anyone to navigate their hometowns or leave their houses without the power of sight. It’s a hugely ableist assumption, isn’t it?

Also on the negative side, there’s a missing sense of climax and payoff for the book as it reaches its dramatic conclusion; the fact that we never get to know what the creatures are or what they look like feels like a bit of a cop out. (Describing the unfathomable is no easy feat, but if you’re writing a monster story, one has to eventually observe the monster – those are the rules.) Similarly, there’s something eerie and too good to be true about the rushed ending of Bird Box (Terminus from The Walking Dead, anyone?)… that said, I do like the occasional horror novel that ends with hope instead of gleeful despair.

And ultimately, I enjoyed Bird Box very much, even with these shortcomings in mind. This is a sharp, entertaining novel about the nature of fear, and I’ll be on the lookout for more from Josh Malerman in the future.

Malorie stands in the kitchen, thinking.

Her hands are damp. She is trembling. She taps her toe nervously on the cracked tile floor. It is early; the sun is probably only peeking above the horizon. She watches its meager light turn the heavy window drapes a softer shade of black and thinks,

That was a fog.

The children sleep under chicken wire draped in black cloth down the hall. Maybe they heard her moments ago on her knees in the yard. Whatever noise she made must have traveled through the microphones, then the amplifiers that sat beside their beds.

She looks to her hands and detects the subtlest sheen in the candlelight. Yes, they are damp. The morning’s dew is still fresh upon them.

Now, in the kitchen, Malorie breathes deep before blowing the candle out. She looks around the small room, noting the rusted utensils and cracked dishes. The cardboard box used as a garbage can. The chairs, some held together by twine. The walls are dirty. Dirt from the feet and hands of the children. But older stains, too. The bottom of the walls in the hall is discolored, profound purples that have dulled to brown over time. These are blood. The carpet in the living room is discolored, too, no matter how hard Malorie scrubs. There are no chemicals in the house to help clean it. Long ago, Malorie filled the buckets with water from the well and, using a suit coat, worked on removing the stains from all over the house. But they refused to go away. Even those that proved less persistent remained, a shadow perhaps of their original size, but still horribly visible. A box of candles hides a blotch in the foyer. The couch in the living room sits at an awkward angle, moved there to shield two blemishes that look like wolf heads to Malorie. On the second floor, by the attic stairs, a pile of musty coats conceals purple scratches, embedded deep into the foot of the wall. Ten feet away is the blackest stain in the house. She does not use the far end of the home’s second floor because she cannot bring herself to cross it.

This was once a nice house in a nice suburb of Detroit. Once, it was family-ready and safe. Only half a decade ago, a real-estate agent would have proudly showed it off. But this morning, the windows are covered with cardboard and wood. There is no running water. A big wooden bucket sits upon the kitchen counter. It smells stale. There are no conventional toys for the children. Pieces of a wooden chair have been whittled to play the part of little people. Small faces have been painted upon them. The cupboards are bare. There are no paintings on the walls. Wires run from under the back door into the first-floor bedrooms, where amplifiers alert Malorie and the children to any sounds coming from outside the house. The three of them live this way. They do not go outside for long periods of time. When they do, they are blindfolded.

The children have never seen the world outside their home. Not even through the windows. And Malorie hasn’t looked in more than four years.

Reading Next: Authority by Jeff VanderMeer