Hello everyone and happy Tuesday! Today, our guest is Octavia Cade, author of the excellent novella Trading Rosemary, a story that knocked Ana’s socks off. We are super pleased to give the floor to Octavia to talk about inspiration and identity. 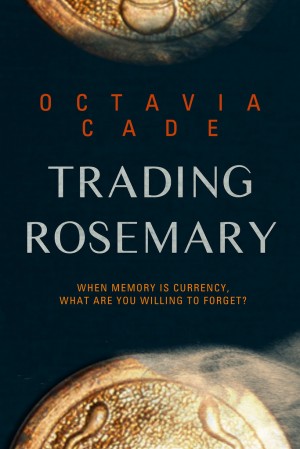 Give it up for Octavia, everyone!

“Write what you know.” It’s what every beginning writer is told. And what every writer knows best – or should know best, or doesn’t – is themselves. Sometimes I think that’s what life is… a long, long journey where, if we’re honest and at least a little thoughtful, we get to know ourselves. It’s like a quest, really, except the quests that we tend to read about in speculative fiction skip over the pedestrian pieces of life while for most of us those are right up in centre. It seems poor material with which to build a story. What kind of quest is it, where the only goal is finding out who we are?

It’s a quest that interests me. I seem to be fascinated by identity. I say “seem to be” because I have two novellas being published this year, both by Masque Books, and both are concerned with the fundamental question of personal identity. I didn’t plan this. I didn’t realise I was setting up a mirror between novellas until it was done. There was no reason to suspect: they both have different characters, different settings, different genres – and very, very different styles. Some things are only obvious in retrospect.

“Trading Rosemary”, published in January and recently reviewed by the Book Smugglers, is the story of a mature and confident woman. Rosemary has a grown daughter, and a successful, established career. She knows exactly who she is. And in the science fiction setting of future New Zealand, where memories can be cast into coins and traded away, this is enough. Then Rosemary makes a bad deal, and trades away a memory she needs to get back. But the coin can only be recovered if she chooses to trade away more and more of herself, of her own memories, her own connections with the world. It’s vivisection of a sort, a deliberate deconstruction of self, the dismantling of identity for cause.

In stark contrast to this is the urban fantasy “The Don’t Girls”, due out in December. “The Don’t Girls” is based around the fairy tale character of Bluebeard’s wife. Bluebeard has had many wives, and killed them all for curiosity, so this Bluebeard’s wife is but the latest in a long line, and everyone around her expects her to be equally as ephemeral. And why shouldn’t she be? She’s no Rosemary – she’s a very young woman, no more than a girl, sold off by her father to be the doomed wife of a powerful man. Even her name is taken from her; she has no sense of self. Bluebeard’s wife is a cipher, nothing more. All that she has of her own is a natural perversity, a desire not to do what she’s told – and a friend. For when Bluebeard’s wife meets Pandora of the box, it’s the start of a quest to discover her own name, to make an identity for herself – and, by extension, an identity for all her predecessors, all the sad, unnamed corpses in her husband’s dungeon, all the women who came before.

The quests are mirrored. Rosemary knows who she is and needs to let that go. Bluebeard’s wife is a blank slate and needs to know herself. These are both questions of identity, approached from mirror angles.

And me? Well, if one looks for inspiration and influences from what one knows, then the self is the only real place to start. “Trading Rosemary” was released in January. “The Don’t Girls” comes out in December. I wish I could wake up on the last day of June and find the parts of me that they represent reconciled, but that is a short journey, a short quest. I hope for longer. There is so much more to learn.

I’m older than Bluebeard’s wife, but not so old that I don’t identify with her need to discover what she is, to go out into the world and find how she reflects it, and how it reflects her. I’m younger than Rosemary, without the career or the family, but not so young that self-knowledge is beyond me. Many of Rosemary’s experiences, after all, are mine – and if she has bundled them up into coins to pass them on to others, then I have bundled those same experiences into words for the same purpose. We are the same, almost.

We three are the same.

About the author: Octavia Cade is a PhD student at Otago University’s Centre for Science Communication. She’s also a writer – you can read her short stories at Strange Horizons, Cosmos, and a number of other places. Her first book, Trading Rosemary, is out now from Masque Books. Follow her on Twitter @OJCade.