It is not a secret that we are huge fans of Melissa Marr’s books. Thea was the one who first read Wicked Lovely last year and promptly told Ana it was one of the Good Ones. 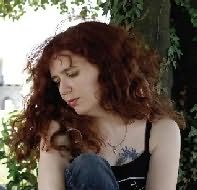 From that moment on, we were hooked. After we read her newest release, Fragile Eternity (out today, April 21st!) we invited Melissa Marr for a guest post and despite her ultra busy schedule she was kind enough to say yes – not only that: she wrote an amazing piece on writing her book in which she reflects deeply on POVs and character arcs for her series. There is nothing more exciting to get a look at the writing process of such a talended writer so it is with immense pleasure that we give the floor to Melissa Marr: 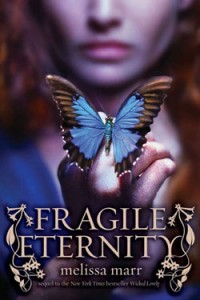 (First, thank you, Ana and Thea, for the invitation.) I don’t think what follows is too spoilery, but I’m lousy about that, so please forgive me if it is.

One of the interesting parts of writing for me is that writing each book (so far!) has been a chance to hear new characters’ voices or to share old characters’ voices more fully with readers. In Wicked Lovely, I knew Seth had flaws (who doesn’t?). I knew the character traits that would be issues down the line for him—and the traits of Ash’s that would be issues for them all. However, by writing limited third person pov, we only saw Seth through other people’s eyes.

There were hints, of course. He had a bit of frustration when Ash tried to shut him out; he was willing to put his own thoughts aside for her desires; he had discomfort over some of her choices but he set it aside out of fear of her leaving him. The cues are present, but they aren’t glaring because to make them so would mean Ash saw them and at that stage of their relationship, she didn’t. In INK, we saw other traits. We saw Leslie taste his jealousy—and realize that the calm he projects isn’t all that’s there. It’s in the text, but in Fragile Eternity, we are finally able to see inside his world. In it, we are in his pov. All of the traits that are only glanced at in the first two books are able to be explored in this book. This, to me, is the joy of switching pov. . . and of course, the limitation when I want to show other characters’ motivations, flaws, and weaknesses. I simply can’t, not without violating the integrity of pov, but by showing Seth’s pov, I am not showing another characters’ pov. It’s a balancing game. I have to choose whose pov is essential to each novel.

In Fragile Eternity, Ash’s pov is also essential. This is where readers can see the reality of Ash’s decision to become the Summer Queen. Again there were clues in Ink Exchange: we saw her failure to deal adequately with Leslie’s situation in Ink. We saw the consequences of that—and how other faeries made use of it. Niall, Irial, and Keenan all manipulated events, in parts, as a result of Ash’s inexperience. She is not quite 18 with no experience—or expectation—of ruling, and she is suddenly thrust into a position of responsibility and power with a serious secrecy clause. Who among us wouldn’t screw up? Her only anchors are Grams and Seth. She is left trusting some faeries—those for whom she has felt an innate bond (her court and king) and those who were kind to her (Niall and Donia).
Fragile Eternity is a middle book in this series; the events in it result from those that preceded it while the events in the 4th and 5th books could not happen if not for the events in Fragile. This is the book where the threads set up in Wicked Lovely (references to Sorcha’s hidden court) and in Ink (our encounters with Bananach) come to the forefront. For that reason and one other that IS spoilery to tell so I won’t, Sorcha (the High Queen) also had pov duty this time.

In the first two books, I stopped with three povs. In the fourth book (which is out in 2010), I stopped at three pov. In Fragile I needed a fourth voice—Donia’s voice. Like Ash, Donia is a new queen. She, however, has the experience with faery machinations that Ash lacks. Her choices reflect that.

All of these characters’ threads are important, but to me this is “Seth’s book.” He is at the center. His choices and the impact of others’ choices on him are what this book is about. Unfortunately, faery folklore makes clear that becoming a faery—as so many readers suggested should’ve happened at the end of WL—isn’t like becoming a shapeshifter or vampire. In faery lore, there is no bite or scratch that will transform a mortal. In the world of Wicked Lovely, the only transformative power we have to become fey is via a curse. Ash, Donia, the Summer Girls, the Winter Girls—they were all cursed.

That changes Seth’s options a great deal. He’s a fragile mortal in the world of faeries, powerless and finite, and like everyone in my books, he is trapped by circumstances. That leads to some choices that early readers have both approved of and disliked intensely. There are always choices, but that doesn’t mean we always like the ones we have—or the ones our friends and loved ones make.

Thanks, Melissa and good luck with your release!

Now, if you would like to read more about the author, you can check this interview we did with her last year. To see what we thought about her books:

If you haven’t read her books: give it a go. If you have, chances are you know what we are talking about!

Tomorrow: we dared Jessica from Racy Romance Reviews to read Wicked Lovely for your monthly Guest Dare post. We can’t wait to see what she thought!