As part of Pride 2017, we are highlighting new and upcoming LGBTQIA books.

Oversight by Santino Hassell is the second book in The Community trilogy – a romantic suspense series following queer characters. We invited the author to write about the inspirations and influences behind the series. 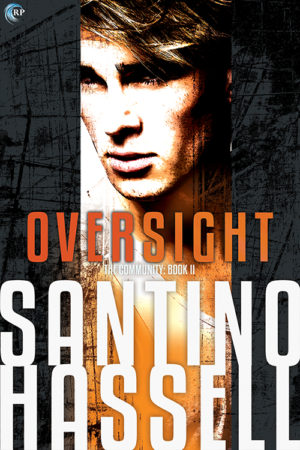 The Community: Inspirations and Influences

When I started writing The Community trilogy, I wanted to pay homage to my love of Poppy Z Brite and Christopher Rice novels—a story with elements of paranormal, horror and mystery, but driven by queer characters. Growing up, books like that mattered to me. Not only were there queer main characters canon in the text, but they were fighting monsters, battling paranormal forces, and generally kicking butt. I wanted to be like those heroes. When I became a writer, I wanted to create heroes like that of my own.

At first, INSIGHT (the first book in The Community trilogy) was titled “Impressions”, and it was going to be a YA. I went through a draft, struggled, and ditched it. I couldn’t get it right. Something wasn’t clicking even though the bones of the story—an empath from a family of psychics has an image of his twin being murdered in a distant urban city and goes to investigate—were there all along.

I rewrote it some time later, fleshing it out further, aging the characters up and making them queer, but I still could not get it exactly right. It sat on a shelf for years, and it wasn’t until I immersed myself in romance, and began reading and writing more deeply about relationships, did I realize I was not only missing key parts of what made the relationship between the two main characters dynamic and intense—but I was trying to fit a series into one book, motivations were unclear when it came to the Big Bads, and I was missing a fully realized cast who could continue the overall story even after my main characters got their happily ever after.

What came about was The Community—a trilogy about a psychic organization hiding in plain sight from the non-psychic (void) world that isn’t what it seems to be. The Community is supposed to be a haven for psy who were abused and discarded by voids, a place they can rehabilitate, learn to control their gifts, and grow from the resources available at the Community’s fingertips. There are elements of that, yes, but as the trilogy goes on, it’s also exposed to be far more insidious and controlling with an obscure hidden goal. In the creation of The Community, I was very influenced by documentaries relating to Scientology, but also by the practice of gas lighting and grooming that I’ve experienced throughout my life. These are things that are dangerous to everyone, but are even more so to vulnerable and marginalized people.

I married this overall plotline with my desire to shift the story into a series of romances with different main characters, and INSIGHT, OVERSIGHT, and SIGHTLINES were born—a trilogy about queer people banding together to discover, expose, and then take over the community that has used one of their safe havens as a hunting ground for talented new psychics.

With this series, I was able to combine my favorite paranormal elements with my favorite romance tropes all while examining unhealthy family relationships, themes of loyalty and betrayal, manipulation, and the way the powerful will almost always target people they view as the weak. In this case, it’s the founders of The Community believing they can use queer psychics as experiments and scapegoats. Except, the heroes rise up and resist, banding together and falling in love in the process.

Santino Hassell was raised by a conservative family, but he was anything but traditional. He grew up to be a smart-mouthed, school cutting grunge kid, then a transient twenty-something, and eventually transformed into an unlikely romance author.

Santino writes queer romance that is heavily influenced by the gritty, urban landscape of New York City, his belief that human relationships are complex and flawed, and his own life experiences.

Oversight is out now.