Today we are thrilled to host YA author Alexandra Bracken! Ana read and loved Alexandra’s romantic fantasy debut novel Brightly Woven, so when we learned that she was coming out with a new book (a dystopian SF book with hints of superpowers in the mix!), we were thrilled. Today, Alexandra is our guest to talk about her new novel, The Darkest Minds. 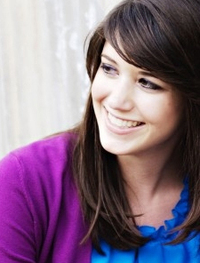 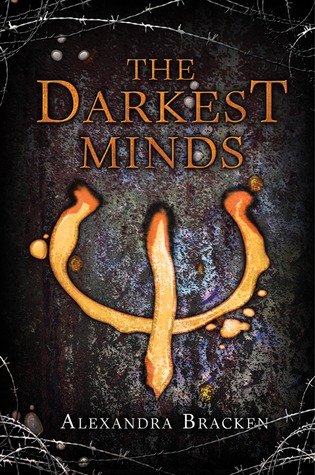 Please give a warm welcome to Alexandra, everyone!

Over the past few months, I’ve had a number of brave souls ask me for a quick elevator pitch of what my new book is about. I say brave, because I cannot, for the life of me, ever really pitch my books in a coherent way. (This is especially ironic when you consider the fact that, for my day job, I spend weeks pitching books to librarians and educators.) Even with Brightly Woven, I almost always fell back on mumbling something like, “wizards, curses, and kissing.” Instead of, you know, improving with time, I can tell you with complete certainty that I’m even WORSE about pitching The Darkest Minds — but I don’t think it’s because I can’t easily sum up the plot. I think it’s because I fear the inevitable follow-up question: What inspired this book?

I struggled with it–I still struggle with it. I hear that question, and it’s like the words well up inside my throat, only to get tangled and garbled along the way. It’s taken me months to understand that what’s catching my tongue isn’t so much the fact that the story grew up as a rootless tree–it didn’t, and I think you’d be hard pressed to find a story that did. It’s really just that the roots of this one run so deep and are so impossibly intertwined at this point that I can’t find the place where the original seed was planted.

Developing this story was about as organic as you can get. It’s filled with things I love in life and in books: a close-knit group of characters, superpowers, classic rock, road trips… Even the characters, from the moment I sat down to write, felt fully formed and tangible to me–like I could reach out and smooth their wrinkled shirts or straighten Chubs’ bent glasses. The only character that I struggled to develop is the one that never really shows his hand to anyone. I should stop here and say that if this sounds magical, it’s because it really is. I’ve never had it happen to me before, and I wonder if I’ll be lucky enough to have it happen again.

So, because I know it would take a good twenty pages to try to really distill the inspirations for this book, I’ve decided I’m going to tell you a story instead. If we’re sticking with the lame tree metaphor I started above, you can consider this to at least be one of the deeper roots.

I knew in high school that I wanted to go to school “back east” to study early American history, and that, for me, meant the Southeast, because, let’s face it, I would not have survived a New England winter coming straight from Arizona. My dad gleefully offered to take me to look at schools in an epic roadtrip through Maryland, Virginia, and North Carolina—folks, I should have been suspicious about his other motives for volunteering when he started cultivating this massive binders of maps and print-outs about the region. See, Dad kind of fancied himself to be an amateur Civil War historian, so in addition to schools, we also hit up every major battlefield and fort along the way. Every single one. By the way, this wasn’t a one-off thing, either. I picked William & Mary in Virginia, and from that summer on, we’d fly back a week early and hop on the Civil War Trail. By the end of four years, I had seen a lot of Virginia. A lot. To really put it into perspective for you, there were 212 Civil War battles fought in Virginia, and we ran out of places to visit.

Back to this original road trip, though. It took pretty much one “hey y’all!” in Richmond’s airport for me to fall in love with the state, and that was even before we took a drive through the Blue Ridge Mountains with The Rolling Stones blaring on the speakers. Virginia is truly one of the most beautiful places I have ever been, and the people from there are some of the best I’ve met.

If you’ve already read The Darkest Minds, you probably can probably already pick out a few things I “loaned” to Ruby’s character. The biggest being that my dad and I drove most of the route the kids take as they’re searching for East River, including that stretch of highway somewhere in western Virginia that Ruby mentions only has two real meal choices: Cracker Barrel or Waffle House. Seriously—it’s one or the other off every single exit. No gas stations, no McDonald’s, no hospitals. Just Cracker Barrel and Waffle House.

I can’t remember why we picked Waffle House. Neither of us had ever been to one (sheltered West Coasters that we were) so maybe we were curious, or starving, or just totally gave up hope we’d find another restaurant. What has been seared into my memory, though, is that when we pulled into the mostly empty lot, there was a bag of food perched at the edge of the curb. My dad scooped it up and brought it inside, figuring that someone had accidentally left it there, or it was trash. Even before she called out a greeting to us, the woman behind the counter took one look at that bag swinging from his hand and pointed back to the door, saying, “You put that bag right back where you found it, mister.”

We didn’t get the full story until after we ordered, and after we promised we wouldn’t tell her manager. We had to draw the story out of her one whispered line at a time as the bacon sizzled behind her. This waitress—her name was Martie—was convinced she had seen a group of what she thought were teenagers going through the restaurant’s trash, presumably for food. Her theory was that they were kids from the same family, and were either runaways or their family was destitute. The other waitresses told her that she was crazy, but I’m not so sure. The food was gone by the time we left.

I’ve been thinking about those teens, whether or not they really existed, what their situation was, and Martie’s kindness. My feelings about Martie, in particular, have changed as I’ve gotten older. At eighteen, I was touched by her stubborn kindness and the fact that she had this don’t-ask-don’t-tell policy. Her reasoning to me was simple back then: she didn’t want to get them in trouble. At twenty-five, I see the situation as being much more problematic. Did she, or anyone else, ever call Child Protective Services? Did she ever try to engage them in conversation, or did she continue to look the other way? (To be fair, from the sound of it, these kids made it a point not to be seen. Martie said she only got a quick look at them before they dashed off back into the surrounding woods.) Was there something holding her back from doing either of those things?

I’m not sure what happened to those teens, or if they even existed at all. If Martie’s story was true, I hope beyond hope they got the help they needed and they’re somewhere safe. But somehow, to me, they’ve always felt real, and the idea of them—the implications of that act of kindness–haunted that dark space at the back of my mind, until they showed their phantom faces again when I sat down to write The Darkest Minds.

Alexandra Bracken was born and raised in Arizona, but moved east to study at the College of William & Mary in Virginia. She recently relocated to New York City, where she works in publishing and lives in a charming apartment overflowing with books. You can visit her online at www.alexandrabracken.com or on Twitter (@alexbracken).

Thank you, Alexandra! And make sure to stick around as we review The Darkest Minds later today.