In which Rebecca Hahn talks about writing The Shadow Behind the Stars.

Today, we host Rebecca Hahn (of A Creature of Moonlight fame – one of Ana’s top 10 books of 2014) to talk about her new YA novel, The Shadow Behind the Stars. 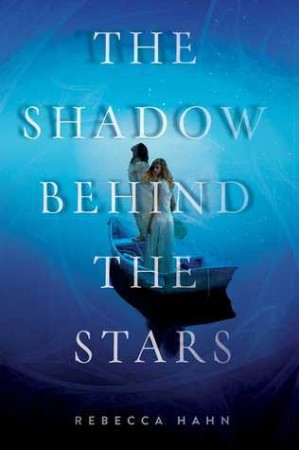 Please give a warm welcome to Rebecca Hahn!

My latest book, The Shadow Behind the Stars, is set in pseudo-ancient Greece, and Greek mythology influences it storyline. The narrator, Chloe, is the youngest of the three Greek Fates, who spin, measure, and slice the threads of all mortal lives. As Chloe tells her story, she references various myths: for instance, in the first chapter she mentions Prometheus (a Titan who brings fire to humankind), though not directly by name.

In the process of editing the story, some references were cut for concision and clarity. Here’s one (from the first chapter of Part Two) that didn’t make the final book:

Once the dawn fell in love with a mortal boy, and she granted him everlasting life so as to keep him by her side always. He never died, but he grew old. She was as smooth and rosy as ever; he withered and drooped, fading into a horrible shell of the fresh-faced youth she loved, trapped for all eternity in a worsening old age.

This is the story of Tithonos and Eos (in Roman mythology, Tithonus and Aurora). Eos is the goddess of the dawn. She believes she is helping Tithonos, the mortal boy, when she asks the head of the gods, Zeus, for his immortality. But she forgets to ask for eternal youth, and the gift becomes a curse.

I was drawn to Chloe’s voice in part because of the conflict between her own immortality and her unchanging youthfulness: she is at once ancient and always a girl. She goes on after the Tithonos retelling to say:

We are forever divided, you see, the ones with measured threads and us enduring ones. We stay, from hour to hour and from world birth to cataclysm. Humans, when they lose pets or family or friends, know that one day they will be joining them. No matter what they think awaits them in the dark, it is a shared thing. They weep and they wail, but they comfort themselves in the knowledge that whatever their loved ones just experienced, they will one day experience as well.

We do not have that comfort. For all our work with mystery, we cannot touch the space beyond the thread. It is ever closed to us, from the first star’s light when we opened our eyes to the final lick of flame that will end it all.

Her point is that Eos could not bridge the gap between herself and Tithonos: between god and mortal. In some ways the distinction seems obvious: mortals die, immortals don’t. That’s what gives immortals their great power, and that’s what makes humans frail in comparison. But to Chloe and her sisters, the difference is not only one of strength. Humans are united by death; it grants them access to a mystery that gods can never experience. In the myth, Tithonos ultimately begs for death. It’s a request for the right of a human to a final ending, an exit.

That right is not an unequivocally positive thing, and characters in The Shadow Behind the Stars certainly grieve over human mortality. But immortality has its own downsides; it separates Chloe and her sisters from their own makings. Many Greek gods can mostly ignore humans—except for when they fall tragically in love. But the Fates exist to shape mortal lives. In fact, their goddess nature stems directly from their connection to mortality. The Shadow Behind the Stars is in some ways an exploration of this contradiction: it deals with what happens when these immortals are confronted with the results, and especially the deaths, of their own creations.

P.S. If you like Greek myths and/or poetry, go read “Tithonus” by Alfred, Lord Tennyson! And then everything else he wrote.

Rebecca Hahn grew up in Iowa, attended college in Minnesota, and soon afterward moved to New York City, where she worked as an editorial assistant and wrote A Creature of Moonlight on the side. She now lives in Minneapolis, with the winter cold, the wide sky, and many whispering trees.