Today’s guest is author Mark Andrew Smith; prestigious Harvey Award-winning comic book author, editor of the awesome Popgun Anthology series, and graphic novelist. Recently voted the Best All-Ages Graphic Novel of 2009 by MTV’s Splash Page, and featured on the likes of WIRED and Boing Boing, The New Brighton Archeological Society has won over comic readers and speculative fiction fans alike. Thea absofreakinglutely loved it. When Mark agreed to write a piece about his work, the comic book readership, and the future of the medium for our Inspirations & Influences segment, we were, understandably, thrilled. 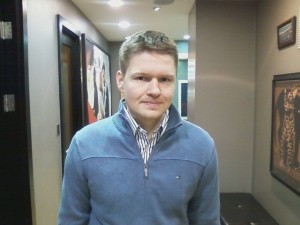 Without any further ado, please give a warm welcome to the talented Mark!

The New Brighton Archeological Society is an all-ages graphic novel series about a group of children from two different families whose parents are close friends and colleagues. After their parents are lost on an archeological expedition, the children find themselves picking up their parents’ work and setting out to defeat their parents’ nemesis. They soon find themselves in a race against time to collect a series of books that are part of a great library of magic that has kept two kingdoms at war for centuries. The children unlock the secrets of their parents’ mysterious lives, discovering a hidden world of mystical artifacts, mythical creatures, and arcane knowledge.

The book began around the title “New Brighton Archeological Society,” and I built it from there. It’s no secret that I like quirky long names for titles. 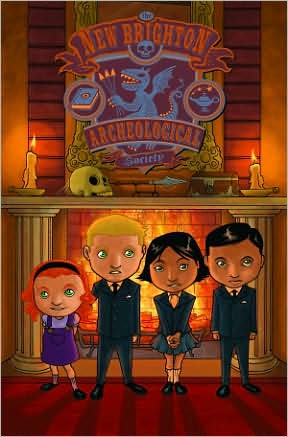 When I was in school years ago at UCSB (Film Class of 2002), I worked at a bagel shop. Adorning the wall to this particular bagel shop was one of those blackboard menus, with different colors of chalk on it. I would stare at this menu out of sheer boredom as I counted down the hours until I could be home again and wash the bagel smell out of my clothes.

But I digress, anywhoo…

On the menu there was a particular sandwich called “The New Brighton.” The name became stuck in my head. It sounded like such a mysterious and an intriguing place next to the ocean where waves crashed onto a rocky coast. In proper “The Secret Life of Walter Mitty” fashion, I begun to imagine myself there, far away from bagel hungry customers, and I built on the loose idea about a society that was created there. After doing more research about New Brighton I really liked it more and more because there are about ten different places named New Brighton. The name of the city is ambiguous, much like Springfield from The Simpsons –and can exist in any number of places.

Fast-forward two years after university: I had my first comic book series come out from Image Comics called The Amazing Joy Buzzards. Joy Buzzards was about a rock and roll adventure band that traveled around and solved mysteries with a Mexican Wrestling Genie. The artistic style on the book screams “make this into a cartoon series!” I took Amazing Joy Buzzards to pitch at animation meetings, and I would get comments like, “Can you make them younger and take away the music?” I felt that if I did something like that, it’s not even the same book. So it made more sense to start something new and in a similar tone — but different. Around this same time I was asked to work on a kid’s chapter book series for a publisher. With that motivation, I rolled up my sleeves and got to work.

When I started writing The New Brighton Archeological Society, I did a brainstorm and jotted down the influences of the book. The tone I wanted running through the book is one that I would describe as, the energy and characterization of Calvin and Hobbes, meets the warmth and comfort one feels when looking at a Norman Rockwell painting. I thought it would be important to have a timeless setting but to also have the characters be animated visually so that readers can understand the story just by looking at the pictures.

There are a lot of little things that inspired and influenced the story, and it’s a comic book equivalent of kid’s chapter books for an all ages audience. Old serialized adventures played a huge role in crafting New Brighton. Also, Saturday morning cartoons like the mystery gang from Scooby Doo and the film The Goonies for the type of team we had. Peter Pan in literature as well as all the film incarnations also had their influence on the project. Classic fantasy lore like Lord of the Rings and The Chronicles of Narnia played a role as well.

I really wanted to have an Indiana Jones type feel in parts of the story where folks would travel through epic temples, but in these temples everything would still be alive, and magic and mythology were real and walking alongside the characters in the story.

With the mythology and the creatures, I think often people go to the well of western monsters, but I wanted to add in a lot of Eastern elements because we’ve just seen the tip of the iceberg for Eastern mythology. There is such a wealth of rich material to draw on there!

How is prose different than writing for graphic novels? Writing comics is frustrating because you have to depend on a lot of people after your work is done to complete the project. With prose I feel like writers are very fortunate because at the end of the day they don’t have to depend on another person to finish their book.

Thankfully I have a great editor named D.J. Kirkbride that helps me out with New Brighton, proofreading and catching mistakes. The artist, Matthew Weldon, is also so professional and great to work with, which makes the process so much more fun.

A common misconception about writing for comics is that I just fill in the bubbles in the word balloons. The truth, though, is that I’m writing all of the action, the panel breakdowns, what’s in the frame, the pacing, and character expressions. It’s a lot more detailed than a screenplay, kind of like a shooting script. The funny thing about writing for comics is that most of what I write the reader never reads, as about 90% of it gets covered up and replaced with art.

The markets for graphic novels and comics have been largely segregated over the last 10 years. Printed comics are in a state of declining readership and in a distribution system that makes it hard for people to purchase them in bookstores. Comic book shops are reluctant to carry independent and non super-hero titles and often the only way people can get particular graphic novels is on Amazon. Graphic Novels have got to get into bookstores and in front of their intended audience, but the system in place right now keeps us segregated from the book market. I hope in the next few years all of this will soon change. Graphic Novels and the distribution system for them must rapidly evolve in the next five years or die. 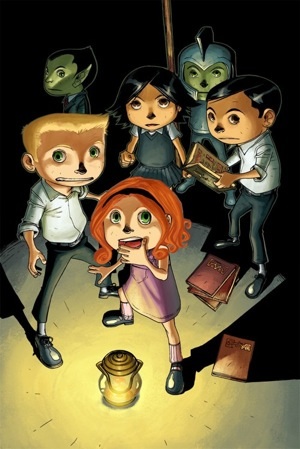 I’m very excited about the iPad and other reader devices. These should be a boon for graphic novels and comics writers, as they can easily get the work directly to the readers, making it a great marriage of books and technology.

There’s a shifting trend in graphic novels these days to make them for a wider audience. I think the words “graphic novel” still carry with it a stigma from thirty years ago that creators are working hard to try to change. A while ago the trend was towards graphic violence, with lots of female anatomy exaggeration, and superhero based male power fantasy, and there still are those types of books. In fact it’s still half of what’s out there on the market, (It’s like the embarrassing drunk uncle you have that shows up to family gatherings where the rest of the family is normal). The superhero readers are getting older and older and there aren’t new readers to come in and replace them.

But a lot of people are working hard to change those stereotypes about comics and to make a wealth of diversified material to attract new audiences to the medium of graphic novels. For the past thirty years, it’s very much been a boy’s club with the exception of material from a few creators, such as the great Neil Gaiman.

Now more and more people are discovering that comic books are a medium and not a genre.

Could you imagine if there were just one genre of novels to read and nothing else and that it was the superhero genre?

It’s crazy to imagine right? The idea is very laughable to imagine Dickens writing orphaned heroes down on their luck and wearing spandex. But it’s been the case for at least the past 80 years in the medium of comic books and graphic novels. If it were the case for novels it would mean the death of the novel medium.

Thanks to works like Understanding Comics by Scott McCloud, more and more people are realizing that comic books are not a genre but a medium capable of telling any range of stories under the sun, with almost limitless potential. There are comic books in broad ranges of genres now from adventure, to wine tasting, and cooking.

In the past ten years we’ve been working very hard to diversify. There are a lot of us doing our best to get the word out about the potential of comic books to reach every kind of reader out there. There is a comic book now for every reader to enjoy.

Right now, more than ever, we need to increase graphic novel literacy with children reading comics. We need to make strong allies of librarians for non super-hero material, and we need to work as hard as we can to attract women towards reading graphic novels with material that is attractive and that they will enjoy.

The biggest shockwave this last year came from Comic Con International, where a huge number of Twilight fans showed up. A lot of comic book readers were annoyed while others took note and saw the great potential to having the female compliment of fans at the largest culture show in the world.

A Twilight graphic novel adaptation of the Twilight Saga will be out soon with 350,000 copies printed out of the gate, which beats all sales numbers that comics on the market now are doing in terms of sales.

The comic market is taking notice of the power of female readers, and we need to serve and cater to them more. We need women in roles of power in the comic book industry and telling stories. Right now the best example and perhaps only example of this is the Vertigo imprint from DC Comics under Karen Berger. I think they’re the only ones who’ve got it right in that regard.