Earlier this year, after Thea read (and loved) Secret Society Girl, Diana Peterfreund’s debut novel, we Book Smugglers started to follow her blog and look for more titles and news from this talented author. When we first heard about her upcoming Young Adult book, we were instantly hooked: Rampant is a novel that takes the unicorn (one of the most beloved, magical creatures of myth) and turns it into a bloodthirsty killer. We had to read it. And wouldn’t you know it? We loved it. And we’re well on our way to developing huge girl-crushes on Diana.

So, when the opportunity arose to have the author over for our Young Adult Appreciation Month, we were absolutely thrilled! Ladies and Gents, without any further ado, please give it up for the lovely Diana Peterfreund! 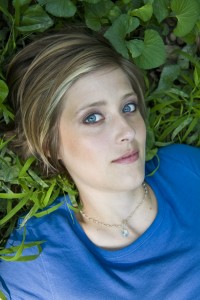 I could probably talk for ages about my inspiration for the book (the non-western facets of the unicorn legend) and my love of stories about female warriors (my first hero was Princess Leia). But there’s also the way I combine these fantasy elements with the real world – in this case, Rome, Italy and how the truth of this amazing city is far more fantastical than anything I could make up.

One of my personal rules for setting up a fantasy world is to make everything else beyond the magic make perfect sense. I look for real-world analogs like a lawyer building a case looks for precedents. Rome, in this capacity, is a veritable gold mine.

Using examples as varied as the Vestal Virgins and the Knights Templar, I created an order of warrior nuns: women born with the power to be unicorn hunters who were tithed to the church as celibate servants of God. Their service just happened to be with a bow and arrow. It really wasn’t so outlandish an idea. Religious orders were a deeply entrenched, unbroken chain of history and learning, and a vow of celibacy was the most reasonable way to make sure that your unicorn hunters stayed eligible. It was common throughout much of European history for families to pack their daughters off to nunneries (Christian or otherwise, as the Vestal Virgins were just another type). The question was, once unicorns were hunted to supposed extinction (160 years before my story starts) and the order disbanded, what becomes of all that stored knowledge? And how does a new generation of unicorn hunters, not necessarily Catholic (and definitely not down with being tithed or cloistered anywhere!), react in a world that has changed completely, both in terms of female empowerment, and also in terms of what one does with deadly, but endangered, animals?

Once I chose Rome as the seat of the ancient Order of the Lioness (in the legends, the lion was one of the only creatures who could kill a unicorn, plus it was one of the signs of Alexander the Great, and therefore an obvious choice for my nuns’ official mascot), I decided a research trip was in order. I’d already had an idea of having my hunters’ nunnery – my invented Cloisters of Ctesias — feature walls studded with the trophies from unicorns that their ancient counterparts had killed. But the monks of Rome were way ahead of me. 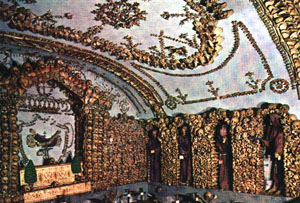 Behold the Capuchin Bone Chapel beneath the church of Santa Maria della Concezione in Rome. For hundreds of years, members of this monastery donated their bodies to this massive work of funerary art, which first began when they moved their church, and dug up the pauper graveyard at their old location. After I saw this, I realized my problem with my “bones in the wall” idea was only that I hadn’t gone far enough!

I’d also come to Rome with a plan to check out some of the architecture of various monasteries and Cloisters, to help plan mine. Well, look what I found in a small cloisters at the Cathedral of Rome: 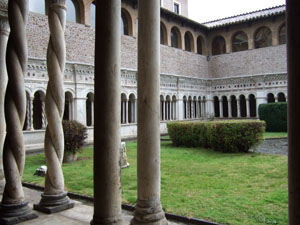 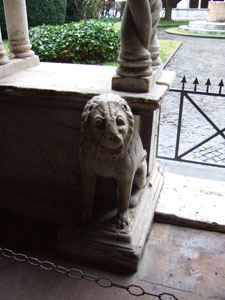 That’s right. Columns shaped like unicorn horns. Gates shaped like arrows and guarded by statues of stone lions. A mosaic of maidens and unicorns (along with other fantastic beasts). And all in the exact same neighborhood and built in the same time period as I planned to set my fictional nunnery. It was too good not to steal. So I did.

The location of my hunters’ nunnery is another robbery. I put it in the same spot as the Basilica of San Clemente, a small church near the Colosseum that’s a major archaeological site. San Clemente is a Renaissance church built on the bones of a medieval church (seriously, you can go underneath it and see where they stole some of the columns) built on top of an ancient Roman temple, built on top of an even more ancient Roman mansion. Every time you take a set of stairs down, you uncover a whole new facet of history. This seemed to fit well with my idea of a modern corps of hunters reconstructing the knowledge of an ancient order whose incarnation changed depending on the prevailing culture, religion, and model of institutional virginity. Here’s a picture of the exterior (public) courtyard, which is the only visual I stole for my Cloisters (except I put a dome in). 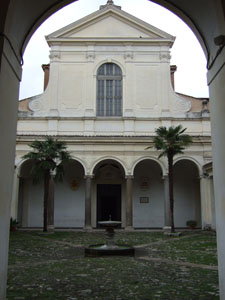 Then there’s the Galleria Borgese, where a pivotal scene in my novel is set. My heroine’s love interest is an art student and has been studying all the amazing art Rome has to offer. He takes my heroine to this famous museum and shows her the following: 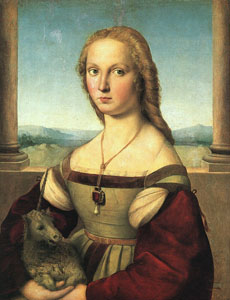 This is Raphael’s “Lady with a Unicorn,” and I found it a most inspiring work of art. This painting was likely a bridal portrait, sent to the groom’s family so they’d know what they were getting: in this case a young woman, a virgin (symbolized by the unicorn in her lap), who brings to her marriage a large dowry (symbolized by the giant jewels she wears). But my favorite part of this portrait is that the unicorn, far from being horse-like, is perhaps a baby lamb or kid, and therefore much more similar to the goatlike zhi that the hunters in my book domesticate and keep as pets.

Remembering my theory of worldbuilding precedent, I love it any time real artwork coincides with my imaginary world – such as showing a dangerous unicorn, or a unicorn that does not look like a big white horse. In the novel, my heroine Astrid sees this painting and instantly recognizes it as a portrait of a hunter with a zhi in her lap.

Finally, I traveled north of Rome to research the final battle scene (no spoilers) for my book. One of the most common questions I get is how there can be unicorns hiding in Rome. Rome (pop. 2.7 million) is not as dense a city as, say, Manhattan (pop. 18.8 million), and it also features one of the largest areas of parks and greenspaces of all European capitals. It’s also surrounded by vast tracts of countryside and farmland, and the city proper is riddled with archaeological sites that are closed off from the public and foot traffic, not to mention miles upon miles of underground catacombs and ancient remains of Roman apartment buildings (not unlike the kind found at the very lowest level of San Clemente). The few larger unicorns I have hiding out in Rome in my book can certainly discover ways not to be seen.

However, when it came to hiding a large pack of them, I needed a more rural area, and so I found Cerverteri. Smack dab in the middle of the beautiful Roman countryside lie the ruins of an Etruscan City of the Dead, a twisting warren of pyramid-like tombs hollowed out from tuffa – a soft volcanic stone common in the area. Nowadays, the tombs look like giant green hills. There are some that are excavated and open to the public (and whatever wildlife happens to wander by) but miles and miles more buried under vineyards and olive groves. Here’s a picture of me standing beside one: 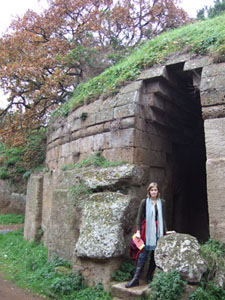 And here’s a view from the top of another hill/tomb. 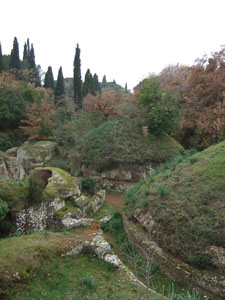 Plenty big enough for a pack of killer unicorns to hide out in. And a truly spooky setting for the climax of my book.

Diana Peterfreund has been a costume designer, a cover model, and a food critic. Her travels have taken her from the cloud forests of Costa Rica to the underground caverns of New Zealand (and as far as she’s concerned, she’s just getting started). Diana graduated from Yale University in 2001 with dual degrees in Literature and Geology, which her family claimed would only come in handy if she wrote books about rocks. Now, this Florida girl lives with her husband and their puppy in Washington D.C., and writes books that rock.

And Now, For the Giveaway! 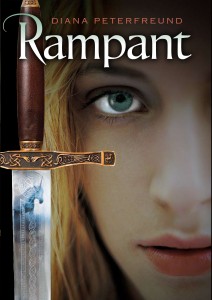 We are giving away ONE copy of Rampant! The contest is open to residents of the US and Canada only, and will run until Saturday August 15 at 11:59 PM (PST). To enter, simply leave a comment here and let us know what your hunter name would be if you were an evil unicorn slayer. (For example, Thea would be Stormhilda Baroness of Hurricanes, and Ana is Pearlfang the Wise Warrior)

The Long And Silent Ever After: Carlie St. George on Inspirations & Influences