Today our guest is Rosemary Edghill, one of the authors of new western/zombie/adventure/mystery novel, Dead Reckoning. We are thrilled to have Rosemary over to talk Inspirations and Influences about her new book! 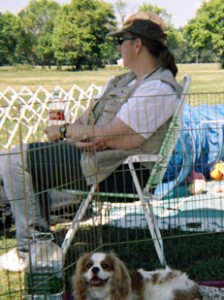 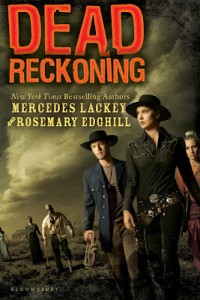 Please give Rosemary a warm welcome!

I can think of no more worthy goal in life than to keep my book addiction from being harshly criticized by the clueless or the unkind, and starting a review blog seems to me to be a small price to pay to be able to bury myself in books.  (Of course, having an e-reader means never having to admit you bought the whole Harry Dresden series over the weekend and will be… unavailable… for a while.)

When I was asked to write a guest post, I was told “and it can be about anything you want”.  Contemplating the specter of staring at a blank page until I came up with an idea (aka: see you in July!) I quickly turned to the font of all knowledge and all inspiration: Facebook.  “I have a post to write!” I said.  “About what?”

At first this made me blink.  Surely there was no dialect being dialected in DEAD RECKONING?  While (tragically) I am in fact infamous for it — having Cajunated Gambit to a fare-thee-well in two X-Men novels and even invented a dialect in which to write my own space opera — I was almost sure I hadn’t done it again.

And then, going back through the manuscript, I ran into: “If I had a dollar for every damnyankee know-it-all I’ve met in the Territories, I could buy them up at auction and get me a fancy box to put them in, too.”  So…  how do you write dialogue when it’s dialect without having it take over the story in a hash of eccentrically-spelled words and too many apostrophes?  Because there’s nothing IMO, that will throw a reader out of a story than a patch of prose that looks like Bad Formatting Day at the IBM Corral.  But on the other hand: how to give the flavor of the time and place?  Going from house to house to read the book aloud to everybody who’s bought it, while a fun way to spend the summer, is probably infeasible.  And that brings us right back to somehow putting it on the page and making the reader hear as they read the same thing I’m hearing in my mind’s ear as I write.

This is probably the most important thing.  You (the author) need to be able to hear the dialect in order to write it down.  When I was preparing to write the X-Man Gambit’s dialogue, I re-watched THE BIG EASY a lot.  Say what you will about Dennis Quaid, I’d read that the movie was cast on location to get the regional accents right.  So off to Netflix I went.  The other thing you should do is see how other writers have handled the same problem (if possible).  You won’t want to copy them, but you will be able to learn from them — and probably find a great read in the process.  So my next stop in becoming a Cajun Queen was James Lee Burke’s Dave Robicheaux Novels.  (They weren’t available as audiobooks when I was doing my research, but if they had been I would totally have checked those out!) 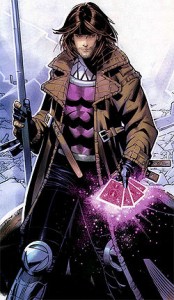 But Jett Galatin, who I’ve quoted above, might have been born and raised in Orleans Parish, but she’s playing a gunslinger in the Old West.  Western movies were a lot of help with look-and-feel, but the way I was going to convey her distinctive speech pattern would be by word choices and sentence structure, and a movie’s dialogue has to be instantly understandable to its audience.  The characters might speak with the proper drawl, but it rarely goes farther than that (and if it’s a Gary Cooper movie, dialogue is thin on the ground just to begin with).  So to make my Westerners sound Wester, I went to the source.  There are a number of biographies and autobiographies written by and about the people of DEAD RECKONING’s time and place, and many of them reproduce the actual words as the people spoke them.  My primary source was Triggernometry: A Gallery of Gunfighters by  Eugene Cunningham.  It became my “go-to” book not only because it was about gunfighters, but because Cunningham had known many of his subjects personally, and had set down their stories in their own words.  Not only did that let me harvest the period words and phrases — from “bluebellies” to “hostiles” to “Arbuckle’s” (the common name for coffee, because Arbuckle’s Coffee was pretty much the number one brand of coffee in the Territories) — but the way the people spoke.  And once I got that firmly settled in my brain, it was easy to make Jett Galatin sound like she belonged in 1867 Texas.

Of course, it also had the rickrolling effect of being hard to shake off, and since I was also working on another YA series about modern teens in a very strange boarding school … well, let’s just say that Revision Is Our Friend.  As is a co-author who snickers loudly at one in chat.

Chris, I hope that answers your question.  And I hope I haven’t told everyone else more than they’ve ever wanted to know about dialect, dialogue, idiolect, and the fine art of literary illusion.  If I haven’t, I can always be found at: rosemary-edghill.dreamwidth.org/ or www.facebook.com/rosemary.edghill, and I love to talk about writing.  Anybody’s writing.  Honest.

Meanwhile, it was with great regret that I was not able to use my very favorite Westernism in DEAD RECKONING, so I’ll leave you with it here:

Thanks so much, Rosemary! Make sure to check out our review of Dead Reckoning, too.