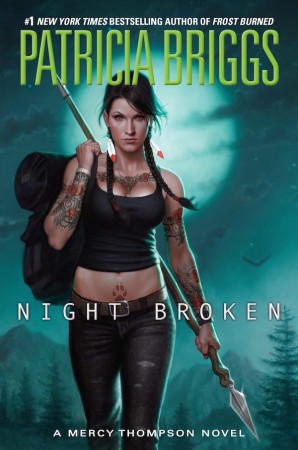 An unexpected phone call heralds a new challenge for Mercy. Her mate Adam’s ex-wife is in trouble, on the run from her new boyfriend. Adam isn’t the kind of man to turn away a person in need—and Mercy knows it. But with Christy holed up in Adam’s house, Mercy can’t shake the feeling that something about the situation isn’t right.

Soon, her suspicions are confirmed when she learns that Christy has the farthest thing from good intentions. She wants Adam back and she’s willing to do whatever it takes to make it happen, including turning Adam’s pack against Mercy.

Mercy isn’t about to step down without a fight, but there’s a more dangerous threat circling. Christy’s ex is more than a bad man—in fact, he may not be human at all. As the bodies start piling up, Mercy must put her personal troubles aside to face a creature with the power to tear her whole world apart.

Stand alone or series: Book 8 in the Mercy Thompson series

Why did I read this book: You could say that I’m a pretty big Mercy Thompson and Patricia Briggs fan. I’ve reviewed every single one of the Mercy (and Alpha & Omega) books to date and plan to keep the streak going.

VW mechanic and coyote walker Mercy Thompson is back at home in the Tri-Cities, getting settled back into her routine as the loving and accepted mate of the local werewolf pack Alpha, Adam Hauptman. It hasn’t been an easy road to acceptance for Mercy and Adam as they’ve had their share of drama with vampires, fey, supernatural objects, ghosts, supremely powerful artifacts, and – oh yeah – challenging relationships with resentful subordinate werewolves. Things finally seem to be settling down when a phone call happens that will upend Mercy and Adam’s lives…again.

This time, the upending comes from Adam’s ex-wife, Christy, who has gotten tangled up with the wrong boyfriend. Begging the Columbia Basin Pack for aid, Christy moves in with Adam, Mercy and daughter Jessie, bringing with her a whole lotta drama. The prospect of cohabitation with a current lover’s ex is stomach-turning enough on its own, but when Christy’s spurned boyfriend turns out to be a powerful supernatural creature in his own right – and the dead bodies start piling up – Mercy has to take matters into her own very capable hands.

Well. I’m a little uncertain as to how I should proceed with this discussion because I love Mercy Thompson and this series so much, and it pains me to say that I was deeply uncomfortable and disappointed with this book. Per usual, Patricia Briggs tells a damn readable and expertly written story; per usual, I devoured the latest Mercy adventure in a single sitting. As a heroine, Mercy is as wonderful and grounded as ever, and in Night Broken I especially appreciate and admire her ability to trust her instincts, despite appearances, or what everyone else thinks. But… there are problems with this book. Two problems, in particular:

First and foremost, Night Broken is a filler novel. If I have one complaint about the Mercy series overall, its that there’s been a lack of any underlying unifying thread of conflict or development. I suppose one could argue that the “outing” of supernatural creatures and humanity’s response (including requisite government agency, CANTRIP, and violent purist zealots) is one of those threads, but there’s a lack of overall planning or buildup to a greater meta-conflict. Similarly, there’s the ongoing thread of Mercy’s heritage (her involvement with father Coyote, who conveniently pops in and out of her life with increasing frequency), as well the entanglements with the fey and vampire seethes that are on the backburner but really should get a little more attention with each subsequent novel.

In Night Broken, however, we get… a jealous lover story. Not just any jealous lover story, but one that is disheartening in its portrayal of female-female interactions (more on that in a bit) and focuses on drama instead of actual arc progression. Christy’s violent ex-boyfriend turning out to be an ancient previously unheard of god-creature is pretty cool – I actually love how Briggs draws on non-standard western pantheons for her supernatural creatures – but he’s a throwaway monster-of-the-week type of character. While the mystery behind Guayota and his origins is entertaining, this entire storyline is ultimately unnecessary.

Which brings me to the real beef I have with Night Broken: the problem of the demeaning female portrayal and relationship issue. When Christy comes to stay with Mercy and Adam, naturally, Mercy’s a little uncomfortable. Let’s take a step back and look at this objectively first, shall we? Christy is being beaten (she has the bruises to prove it) by her ex. She’s terrified for her life, especially when others start showing up dead, and she naturally turns to her very powerful ex-husband Adam for help. Based on that information, of course Mercy understands and is going to invite Christy into her home, right? Even if it’s awkward, they’re all adults and lives are at stake.

That’s the objective, high-level view. What actually ends up happening – and consuming the vast majority of the novel – is a passive-aggressive showdown between Mercy and Christy, because Christy wants Adam back, so everything she does is a play for his affections. This includes but is not limited to: Christy “playing up” her bruises to showcase her vulnerability, Christy cooking and homemaking nonstop to win over Adam and his pack, Christy crying at the perfect moment to assuage sympathy and stick it to Mercy, Christy moving her toiletries into Adam and Mercy’s bathroom, Christy answering Adam’s cellphone whenever they are together. In other words, Christy is painted as the worst, most stereotypical kind of jealous, conniving ex, and We Are Meant to Hate Her Because MERCY AND ADAM 4EVERRRRRRR.

This is frustrating on so many levels, namely because it perpetuates this awful mainstream idea that women hate other women (evident not only with Christy here, but also the other female werewolves in Adam’s pack), and vilifies a character for the sake of melodrama and to make Mercy look that much better. In Night Broken, Mercy is the cool, rational character to Christy’s devious scheming; she’s the one readers are meant to sympathize with as Christy fools everyone (except for Mercy and a few key friends) with her Martha Stewart baking, her peaches-and-cream good looks, her perfectly accentuated bruises… This IS a person who has been beaten and on the run for her life from a very, very bad person and Night Broken essentially sets Christy up not only to be hated for coming between Mercy and her OTP, but to be blamed because SHE was the one who taunted and seduced nasty volcano god (she actually “steals” him from her best friend, what a gal!).

Suffice it to say, this was not my favorite Mercy Thompson installment. I still read the book, I still found myself enjoying it superficially (and angry at myself for enjoying it, even if superficially), but I’m frankly disappointed with Night Broken. I’ll be around for Mercy’s next novel in the hopes that Briggs gets things back on track (in particular, there’s an interesting development with Stefan near the end of this book that needs some fleshing out)…but if you’re a fellow Mercy fan, consider yourself warned.

The phone rang while I was elbow-deep in sudsy dishwater.

“I’ll get it,” said my stepdaughter, Jesse, hastily dumping two glasses and a fork in my sink.

A werewolf pack that eats together stays together, I thought, scrubbing stubborn egg off a plate. Sunday breakfasts weren’t attended by the whole pack—some of them had families just like regular people or jobs they worked on the Sabbath. The breakfasts weren’t mandatory because that would have ruined the intent. Darryl, Adam’s second, who usually prepared the meals, was a hellaciously good cook, and his food attracted anyone who could manage to come.

The dishwasher was running, stuffed full and then some. I would have let the rest of the dishes wait until it was done, but Auriele, Darryl’s mate, wouldn’t hear of it.

I didn’t argue with her because I was one of the three people in the pack who outranked her, so she’d have to back down. That felt like cheating, and I never cheat.

Unless it is against my enemies, whispered a soundless voice in my head that might have been mine but felt like Coyote’s.

The second reason for my compliance was more self-serving. Auriele and I were getting along, which made her the only one of the three female werewolves in the pack who was friendly with me at the moment.

Auriele hadn’t been happy having me as the Alpha’s mate, either—I was a coyote shapeshifter among wolves. She didn’t think it was a good thing for pack morale. She also thought, correctly, that I brought trouble for the pack with me. She liked me despite herself. I was used to the company of men, but it was nice to have a woman besides Jesse, my teenage stepdaughter, who would talk to me.

So, to please Auriele, I washed dishes that the dishwasher could have taken care of, ignoring the burn of hot soapy water in the wounds of my trade—barked knuckles are a mechanic’s constant companion. Auriele dried the dishes, and Jesse had volunteered to tidy up the kitchen in general. Three women bonding over household chores—my mother would be pleased if she could see us. That thought hardened my resolve that next week, some of the men would do cleanup. It would be good for them to expand their skill set.

“There’s this kid in my second-period class.” Auriele ignored the ringing phone as she hefted a stack of plates up to the cupboard with a grunt of effort. It wasn’t the weight of the dishes that was the problem—Auriele was a werewolf; she could have lifted a four-hundred-pound anvil onto the shelf. It was that she was short and had to stand on tiptoe to do it. Jesse had to dodge around her to get to the phone.

“All the teachers love Clark,” Auriele continued. “All the girls and most of the guys, too. And every word out of his mouth is a lie. ‘Enrique cheated off my paper,’ he told me when I asked him why they both had all the same mistakes. Enrique, he just gets this resigned look on his face; I expect that Clark has done this to him before.”

“Hauptman residence,” said Jesse cheerfully. “Can I help you?”

“So I told him—” Auriele stopped talking abruptly, her sensitive ears caught by the familiar voice on the line.

Reading Next: Horizon by Jenn Reese

Book Review: The Absolutely True Diary of a Part-Time Indian by Sherman Alexie