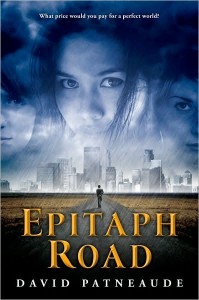 2097 is a transformed world. Thirty years earlier, a mysterious plague wiped out 97 percent of the male population, devastating every world system from governments to sports teams, and causing both universal and unimaginable grief. In the face of such massive despair, women were forced to take over control of the planet–and in doing so they eliminated all of Earth’s most pressing issues. Poverty, crime, warfare, hunger . . . all gone.

But there’s a price to pay for this new “utopia,” which fourteen-year-old Kellen is all too familiar with. Every day, he deals with life as part of a tiny minority that is purposefully kept subservient and small in numbers. His career choices and relationship options are severely limited and controlled. He also lives under the threat of scattered recurrences of the plague, which seem to pop up wherever small pockets of men begin to regroup and grow in numbers.

And then one day, his mother’s boss, an iconic political figure, shows up at his home. Kellen overhears something he shouldn’t–another outbreak seems to be headed for Afterlight, the rural community where his father and a small group of men live separately from the female-dominated society. Along with a few other suspicious events, like the mysterious disappearances of Kellen’s progressive teacher and his Aunt Paige, Kellen is starting to wonder whether the plague recurrences are even accidental. No matter what the truth is, Kellen cares only about one thing–he has to save his father.

Why did I read this book: It’s no secret that I’m a junkie for (post-)apocalyptic and dystopian fiction. So, when I heard about Epitaph Road, it was only natural that I began getting the excited-happy-shakes and did everything in my power to bug as many people as possible to get the title. I make no apologies.

Before the highly contagious and fast-acting Elisha’s Bear Virus decimated half the global population in 2067, the world was already under extreme duress. The world’s glaciers had disappeared, its oceans poisoned with plastic and starved of life. San Francisco had been vaporized by a nuclear attack, Los Angeles obliterated shortly after. In the United States alone, men in correctional facilities outnumbered those in the education system. Drug trade flourished as the economy ground to a halt, and war was eminent in countries around the globe.

When Elisha’s Bear, named for the biblical story of the female bears that killed all of Elisha’s taunters, struck, ninety-seven percent of the male population was killed in a span of a few short days. No cure was found, and only those lucky enough to have been in the most remote areas of the wilderness or strangely immune survived. As devastating as Elisha was, killing the old and young, good and wicked without discrimination, the world began to heal and prosper in the aftermath. Wars ended, and the female population created a peaceful, crime, poverty, and hunger-free world.

Growing up as a male in this utopia, however, is a different matter. All children artificially conceived are engineered to be female, and the male population is maintained strictly in a 20-to-1 ratio. For Kellen Dent, a naturally conceived and born male and son of an important bureaucrat in the new world order, it also means that his future is severely limited. As he prepares to take his “trials” (oral exams that every child must pass to determine their role in society), Kellen faces the grim reality that he can never be more than a second-class citizen and he dreams of joining his biological father, a man that one day decided to take off and live on the outskirts of Vancouver on his fishing boat. When he overhears his mother and one of the top ranking political figures speaking of a quarantine in Vancouver, Kellen and his two friends Tia and Sunday uncover a horrifying truth – and embark on a mission to warn Kellen’s father of the impending danger.

So far as concepts go, I loved the idea of Epitaph Road; a wounded world decimated by an extremely discriminating plague, only to rise again as an apparent utopia. I loved the nomenclature too – Elisha’s Bear, the not-so-nice biblical parable, is a perfect name for this devastating virus. I also like the resounding sentiment that it is the young people of the world that will ultimately be the ones to change it – Kellen, Tia and Saturday and their trek north to warn those they care about, and eventually the world at large is an inspiring and fitting message. (Even though, from the epitaphs at the beginning of each chapter, I think they aren’t giving the adults a fair chance – more on that later)

And yet…for all that I wanted to love Epitaph Road, for all that it is a fast-paced, quick-read thriller, it stumbles in the execution department. Epitaph Road is a potential gold mine, thematically. Are women inherently more peaceful, less violent, and better adept at running the world than men? Would violence and hunger and war truly disappear if men did? It hardly seems like an accurate picture, and Mr. Patneaude does explore (very briefly) the issue of ruthlessness across gender, but only in a glancing, cursory way.

The same can be said for the characters: narrator Kellen and his crush, the very intelligent Tia and the spunky Saturday are great characters, but we never really get to know them or what makes them tick. Even more egregious a flaw, however, is how little the actual adult feelings are explored. We don’t really learn about Kellen’s father and his reasoning to leave his son behind while he lives on his fishing boat (presumably he knows the dangers and hardships facing his son,- so why wouldn’t he want to keep Kellen near?? It doesn’t compute). Similarly, Kellen’s mother never really gets her reprieve or any explanation. Why does she do the things she does? What made her change her perspective regarding the world, her husband? Everything is filtered through Kellen’s perspective, so we don’t see the WHY of anything.

Epitaph Road is good, but it’s content to stick with the simple explanations, glossing over any actual depth. We see how the world has fallen apart, we read how Elisha has ravaged the planet, and we see how women have rebuilt things. But the WHYS of the decisions, these provocative moral gray areas unfortunately aren’t examined at all. By using the childrens’ perspectives, it’s almost a cop-out. Because naturally Kellen, Tia and Sunday can be righteous and outraged at their world – they weren’t around earlier and have not had to make any of the choices that their mothers and fathers have. Had there been more explanation, more exploration of motives of the adults involved, now THAT would have been fascinating.

Notable Quotes/Parts: I loved some of the stylistic touches. The Epitaphs at the beginning of each chapter are brilliant, heart-rending things.

Sometimes, now that late autumn’s outstretched shadows and first snowfall have sugarcoated the bitter landscape of reality, now that bare dogwood branches tick against the front window like small knuckles, I imagine you on the porch steps, bouncing on the soft soles of your sneakers, Dr. Seuss in your hand, a joyous smile on your face, waiting for me to answer your home-from-school knock. Sometimes I go to the door, just in case.
~ Epitaph for Basaam Aziz (March 3, 2059 – August 11, 2067), by his mother, Latefa Aziz, November 27, 2068

Even though Dad always tried his hardest not to give away his feelings, I’m pretty sure he loved Charlie best. But that didn’t make me super sad, really, because Charlie is the firstborn and a boy and he looks a lot like Mom and he’s the best brother in the whole world, even during those tearful times when he’s being colossally stubborn and bossy and rude (I especially don’t care about any of that stuff now, because Elisha’s Bear makes him nervous and not himself most of the time). The sad part, actually, is that I’ll never get another chance to make Dad see that I might have been second to come around, and I might be a girl, but I’m okay, too.

Additional Thoughts: For those that do not know the story, the virus in the novel is named for the biblical story of Elisha and the two bears: 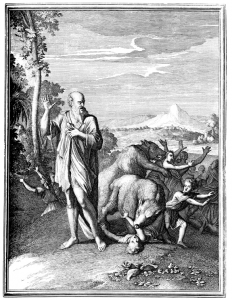 On an unrelated note, I think it’s worth mentioning the covers for this book – the early, ARC cover is gorgeous and true to the story. Compare it to the final cover where the main featured character is a girl – odd, when the protagonist is a male. Ironic, considering the book. I prefer the ARC cover. Any thoughts? 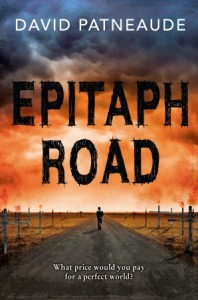 Verdict: Ultimately, I enjoyed Epitaph Road and it was a fast, simple read. I just wish the book could have delved into its potential, morally ambiguous depths instead of taking the simple high road.

Rating: 6 – Good, recommended, but it could have been more.

Reading Next: Spellwright by BLake Charlton