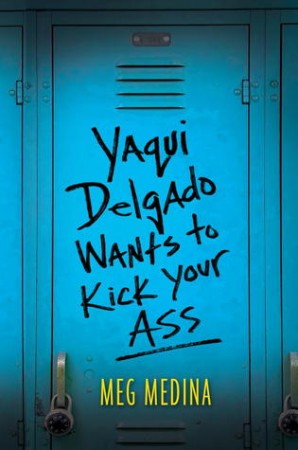 One morning before school, some girl tells Piddy Sanchez that Yaqui Delgado hates her and wants to kick her ass. Piddy doesn’t even know who Yaqui is, never mind what she’s done to piss her off. Word is that Yaqui thinks Piddy is stuck-up, shakes her stuff when she walks, and isn’t Latin enough with her white skin, good grades, and no accent. And Yaqui isn’t kidding around, so Piddy better watch her back. At first Piddy is more concerned with trying to find out more about the father she’s never met and how to balance honors courses with her weekend job at the neighborhood hair salon. But as the harassment escalates, avoiding Yaqui and her gang starts to take over Piddy’s life. Is there any way for Piddy to survive without closing herself off or running away? In an all-too-realistic novel, Meg Medina portrays a sympathetic heroine who is forced to decide who she really is.

Why did I read this book: I missed the book when it first came out but then it won the 2014 Pura Belpré Award and I just had to give it a go.

One morning before school Piddy Sanchez is greeted by a girl she barely knows with a message that says:

Piddy has recently moved to a new house and transferred to a new school away from her friends and if that move wasn’t already difficult enough, she becomes the target of her new school’s resident bully. The worst thing is: she doesn’t even know Yaqui Delgado and has no idea why she’d want to kick her ass.

Yaqui Delgado Wants to Kick Your Ass features a plot that deftly explores bullying and its consequences with a thoughtfulness that is threaded in an all-rounded story. What strikes me the most about Yaqui Delgado though is how the bullying is shown as something that doesn’t happen in a vacuum. That the actions of the bully and the reaction of the bullied are deeply rooted in a society that seems unfortunately ripe and ready for this sort of dynamics to happen.

Piddy is relentlessly attacked by Yaqui – first with words, later with fists. Those attacks are never justified in any possible way and even though Yaqui’s perspective is non-existent, there is a degree of sympathy for her when the narrative explores the type of society we live in with its class separation, racial profiling and low expectations about disenfranchised kids. You grab power where you can, right?

This is Piddy’s story though and it’s the portrayal of her fear that is almost palpable and which spirals out of control and leads her down uncharted territories, that really rings true. There is an inevitable sense of isolation spurred by Piddy’s not wanting to tell her family about her problems at school for a myriad of understandable reasons. And an equally inevitable connection to folks that do might get what she is going through. Piddy’s slow progression from fear to attempting to control said fear by showing a façade of toughness feeding off her own anger was an emotional roller coaster to read. The portrayal of everything she goes through in the course of this story was painfully realistic from the progression of the bullying and the way that we can connect her story to real-life ones to the way that the bullying is eventually dealt with in a manner that might not have been ideal or easy but which was ultimately convincing. I had feared we might have been heading toward an ending that glorified a romantic “you can do it if you put your mind to it” approach when 99.9% of the time, this is simply not how one deals with the often complex situations involving bullying. Putting a kid’s safety first – no matter how – should be everybody’s first concern.

One other aspect of the book that really spoke to me is how the bullying here is also about womanhood. It is impossible to separate gender issues from this story. Although we never really know for sure what makes Yaqui hate Piddy so much, it is hinted multiple times that part of it stems from Piddy’s curvy body and “attention-seeking” attitude. Regardless of whether there is any degree of truth in Yaqui’s accusations (there isn’t), this narrative that reduces a woman to her body, that seeks negative connotations to anything that is remotely sexual and empowering about a woman is one that is unfortunately recurrent in the society we live in. It’s interesting too because to start with Piddy is not even aware that her body has changed – or that this change will incite and attract this type of attention and vitriol. One of the results of the bullying is that she will start hiding her curves, she will even stop dancing. And this question of internalised misogyny is equally shown in the repeated conversations between and Piddy and her mother who is always worried that Piddy will be one of “those lose girls”.

This is a brilliant book. Well deserving its accolades.

Notable Quotes/Parts: I really liked this exchange between Piddy and a friend. It is also part of what makes the book interesting in my opinion for showing different ways of being “latina” as a much more complex affair than most people think. Being a white latina myself who often found herself in similar conversations and who has had people being way too concerned about my wide “latina” hips, it truly spoke to me:

Well, she knows you. And she hates your guts. You’re new here, Piddy, so take my word for it. You’re as good as dead. These Latin girls mean business. If I were you, I’d stay home tomorrow.”
I stop chewing and give her a look.
“In case you haven’t noticed, I’m a Latin girl, too, Darlene.”
Darlene rolls her eyes — again — like I’m the stupid one.
White-skinned. No accent. Good in school. I’m not her idea of a Latina at all. I could point out that
Cameron Diaz is Latina, too, but why bother? It won’t change Darlene’s mind.

Reading Next: The Copper Promise by Jen Williams