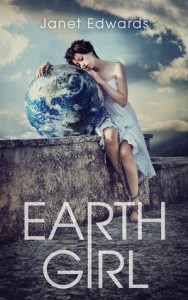 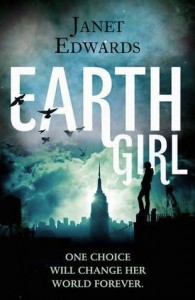 2788. Only the handicapped live on Earth. Eighteen-year-old Jarra is among the one in a thousand people born with an immune system that cannot survive on other planets. Sent to Earth at birth to save her life, she has been abandoned by her parents. She can’t travel to other worlds, but she can watch their vids, and she knows all the jokes they make. She’s an “ape,” a “throwback,” but this is one ape girl who won’t give in.

Jarra makes up a fake military background for herself and joins a class of norms who are on Earth for a year of practical history studies excavating the dangerous ruins of the old cities. She wants to see their faces when they find out they’ve been fooled into thinking an ape girl was a norm. She isn’t expecting to make friends with the enemy, to risk her life to save norms, or to fall in love.

Why did I read this book: The title, premise, and gorgeous UK cover of this book had me hooked…and then I realized it wouldn’t be out here in the US until 2013. Luckily, the good folks at Pyr offered us a review copy as soon as one was available, and I responded with alacrity.

Nearly 800 years in the future, Earth and the rest of the universe is a very different place. Thanks to scientist Thaddeus Wallam-Crane, humanity is no longer limited by accelerated particle engines, or the restrictive harness of speed-of-light travel – Wallam-Crane’s invention of “portals” mean that humanity can conquer the most distant stars, unrestrained by space and time.

Well, that’s true for 99.9% of humanity. That remaining fraction, that niggling 0.1%, is Handicapped. Landlocked. Earth-bound. While the rest of humankind has taken to distant star systems and split into different subcultures with different beliefs and taboos and mores, only the Handicapped remain on Earth. Mocked and ostracized by the rest of society, these Earthers are labeled “Apes” and mercilessly portrayed as unevolved, unintelligent, and undeserving.

Jarra is one of the 0.1%. After her birth on some distant star system, Jarra’s immune system immediately failed. Portaled to Earth and made a ward of the state (her parents, naturally, gave Jarra up as they had no desire to raise an ape child), Jarra’s life hasn’t been bad – she has close friends, a great ProMum, and a passion for knowledge. And she has a plan. At the age of 18, all humans become adults, and can choose a field of study. For Jarra, studying ancient Earth history is a no-brainer – but unlike the rest of her friends, Jarra is not content to go to an Earth university. Instead, she concocts an elaborate, brilliant scheme to attend University Asgard – a prestigious off-world college, with a first-year program excavating ruins on Earth. Masquerading as a Military child, Jarra’s plan to fool her classmates – “norms” or “exos” – into thinking she’s one of them. Then, when the time is right, Jarra will reveal that – HA! – she is an APE, and she plans on savoring the dumbfounded looks on those exo faces. But, as Jarra continues with her program she gradually learns that not all exos are horrible bigots – and she begins to want to WANT to stay in the Asgard program, to continue her career as a historian, and to befriend the norms in her class.

The debut novel from Janet Edwards, Earth Girl is an impressive, richly detailed work of science fiction. I mean, wow. Not only is the premise of the story, especially society’s bifurcation between “exos” and “apes,” masterfully executed, but there’s a level of amazing nuance and refinement with regard to the history of this future human race and its reach across the universe. Make no mistake – slightly kitschy US cover or no, this is an honest-to-goodness work of science fiction, with different sectors, complex social strata, laws, and principles.[1. Ok, on the cover, I like the idea, but the girl wistfully cradling the Earth with the symbolic CHAIN! is a bit much. And the Jarra in my mind from reading this book? I don’t think she’d be so artfully delicate and nostalgic. Not at all.] To me, this worldbuilding respect is Earth Girl‘s greatest strength – we learn about the history of Earth and humanity’s journey to the stars in very clever, non-info-dumpy ways. Namely, this information is relayed through Jarra’s voice, through classmates in her university course, through vids and assignments – all in ways that feel organic and genuinely interesting.

But more than a science fiction text, Earth Girl is also – wait for it – an archeology book. That’s right. Archaeology. Similar to Indiana Jones, cowboying it up in his death-defying quest for the Ark of the Covenant, Sankara stones and the Holy Grail, Jarra is a member of an elite group of science fictional historical excavators who venture out into Earth’s dangerous and crumbling infrastructure to find sealed relics of the past for research and posterity. And like Indy, Jarra’s job is freaking awesome. We learn a lot about this future brand of archeology, the different techniques and teams involved in a dig, and it is all fascinating, wonderfully detailed stuff.[2. Seriously. I never thought I’d be so captivated by excavation technology, policies and procedures, but Earth Girl makes it at once believable and fun.]

The other huge standout for Earth Girl is its heroine, the defiant, know-it-all, unapologetic Jarra. I loved Jarra. Her wry sense of humor, her pride and strength of conviction – heck, I even loved her ridiculously complex false backstory and web of lies. If there’s one thing Jarra is, she’s thorough, and I can respect that. It’s Jarra’s voice that narrates and propels the novel, it is her struggle of identity and her own personal crisis of belief that sits at the novel’s heart.

Of course, there are a few things that pointedly didn’t work in Earth Girl. Most notedly, those were Jarra’s exceptional skills, the plot twists (especially regarding Jarra’s parentage, and particularly towards the end of the book), and the surprisingly fuzzy and unfulfilled theme of minority rights or equality. Most disappointing, to me, is the last – because it would seem that Earth Girl should be a cutting explication of a future society that heavily discriminates against a minority population. But, surprisingly, Earth Girl is much more content to tell the story of the exceptional Jarra – a heroine that time and time again, proves that she is brilliant. Not only is Jarra leagues smarter and more capable than her exo classmates, but she’s also exceptionally talented compared to full-fledged adult historians. She has countless hours logged on dig sites. She can put on her cumbersome impact suit faster than the standard 2-minute military time. She is a brilliant tag leader, with a deep, unprecedented understanding and passion for history. She can nail targets with a single shot, fly a plane, and save lives. This is exacerbated by later plot twists, in which Jarra’s family history is revealed, and at the end of the book when she is miraculously absolved of her deceptions (without even having to break the news to those she’s been lying to for months!).

I was not a big fan of the way the book concluded – too rushed, and Jarra doesn’t really come to a reckoning for the lies she’s told. That’s kind of a big deal. There’s also the uncomfortably quick turnaround from Jarra’s PTSD break back to reality – this also feels rushed and inauthentic.

But, while the conclusion of the novel feels too pat, the fact that there are future books in the series gives me hope. Plus, the parts of Earth Girl that are good are really good. Even with its shortcomings, this is an utterly engaging, memorable, wonderful book. Definitely recommended, and I cannot wait for more from Janet Edwards.

It was on Wallam-Crane day that I finally decided what I was going to do for my degree course Foundation year. I’d had a mail about it from Issette that morning. It showed her jumping up and down on her bed in her sleep suit, waving a pillow, and singing: “Make your mind up, Jarra! Do it! Do it! Make up, make up, make up your mind girl!” She was singing it to the tune of the new song by Zen Arrath. Issette is totally powered on him, but I don’t think much of his legs.

Issette is my best friend. We’re both 17 and we’d been in Nursery together, and had neighbouring rooms all through Home and Next Step. She’d put in her application for the Medical Foundation course months ago. Issette is organized and reliable. I’m not. Most of my other friends had made their decisions too, except for Keon who was planning to do absolutely nothing. He’d been doing that all through school and I had to admit he was good at it.

I didn’t fancy being another Keon, so I had to decide what to do, and I had to do it fast. The deadline for applying for courses was the day after the holiday.

Wallam-Crane day is a holiday on Earth, just like on all the other worlds, but in the circumstances we don’t have celebration parties the way they do. Thaddeus Wallam-Crane invented the portal and gave humanity the stars, but we on Earth are the one in a thousand who missed out when he created the ticket to the universe.

One of my private fantasies is inventing a time machine and travelling back in time nearly six hundred and fifty years to 15 November 2142. I would then strangle Wallam-Crane at birth. If it wasn’t for him, I’d be normal instead of labelled a nean, a throwback. Yes, I’m one of them. The polite people would call me Handicapped, but you can call me ape girl if you like. The name doesn’t change anything. My immune system can’t survive anywhere other than Earth. I’m in prison, and it’s a life sentence.

Reading Next: Tooth and Claw by Jo Walton