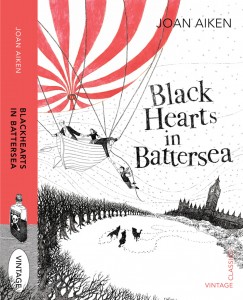 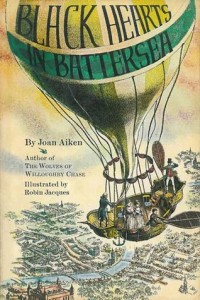 Simon is determined to become a painter when he grows up so he sets off to London to make his fortune. But the city is plagued by wolves and mysterious disappearances. The Twite household, where Simon is lodging, seems particularly shifty. Before he even gets a chance to open his glistening new paints Simon stumbles right into the centre of a plot to kill the King. And worse than that Simon is kidnapped and sent to sea! Luckily there are two friendly stowaways aboard – the feisty Dido Twite and the spoiled young Justin. But when the ship catches fire things look pretty dire. Can they escape? Will they save the king in time?

Standalone or series: Book 2 in the Wolves Chronicles series

How did I get this book: Borrowed

Why did I read this book: Even though I wasn’t a huge fan of the first book, I was reassured by good sources that I’d like the second book more, so I decided to give it a try.

Black Hearts in Battersea is book two in The Wolves Chronicles sequence by Joan Aiken. It follows Simon, the orphaned boy from the first book as he makes his way to London to meet his friend Dr Field and under his tutelage, start a new life as an arts student. Upon arriving in London, Simon finds that Dr Field has vanished without trace from his boarding house and the landlords refuse to acknowledge he was even there.

In between art tutorials, finding work as a blacksmith and reconnecting with his old friend Sophie, there is Intrigue! Adventure! Wild Escapades! as Simon gets entangled in a villainous plot to overthrow King James (and to kill his new friends, the Duke and Duchess of Battersea).

And worst of all: he must also find the time to appease Dido, his landlord’s youngest child, a girl with ferocious wants and nearly incomprehensible vocabulary.

First, the good: the female characters in these books are extraordinary. They are resourceful and smart and full of agency. There is no amount of adjectives to describe how fun the interactions between Simon and Dido were and how devastated I was in the end (until I learned that book 3 is all Dido’s). Equally, Sophie’s fun way of using the Duchess’ tapestry for just about everything in their time of need could be seen as the precursor to the multi-use towel from The Hitchhiker’s Guide to the Galaxy.

But…beyond appreciating the female characters, I just don’t connect with these books as a whole.

I wasn’t terribly impressed with the first book, The Wolves of Willoughby Chase for a myriad of reasons but mostly because the plot felt too…familiar. Unfortunately, I found myself having the same feels about Black Hearts in Battersea. Every single plot point is wholly predictable, every single stereotype surrounding “orphan” stories can be found here – from swapping babies, to fiendish plots and utterly goody two-shoes children (who are even frustratingly good when they are starving). I also wonder about how the series is billed as “alternate history” that takes place during the fictional reign of King James III when that doesn’t really affect the plot in any meaningful way (the story could be exactly the same without being set in this particular reign). It was difficult to even bring myself to finish it.

I am struggling here. It’s hard to separate this (admittedly quite personal) opinion about the book from the fact that I am well-read and well-acquainted with similar plots even though I know this was first published in 1964 and possibly predates all the stories that I read that made this one familiar.

So what does one do in such cases? Do I consider this book a good book? I don’t know how to answer that question but I do know it is a beloved children’s classic. I also know it was simply not for me.

Reading Next: Wake by Anna Hope

Book Review: You Are So Undead To Me by Stacey Jay

Book Review: Girl in the Arena by Lise Haines